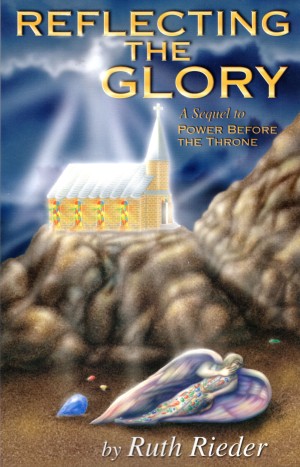 How does the Church begin to fulfill this anointed place of ministry? Let us turn to the Scriptures to rind the answer. The anointing oil was always poured on the head and flowed down to the skirts of the garments. King David wrote, “It is like the precious ointment upon the head, that ran down upon the beard, even Aaron’s heard: that went down to the skirts of his garments.”‘ In the same manner, the reflection of God’s glory begins at the top and flows downward. The question of hair length has been covered in depth in previous books; however, we will continue to explore some other aspects of this multifaceted truth.

Apostle Paul stated in I Corinthians 11:7, “For a man indeed ought not to cover his head, forasmuch as he is the image and glory of God: but the woman is the glory of the man.” The masculine characteristics of a man are actually a representation of God’s glory. Conversely, the feminine attributes of a woman are a glory to the man, who represents God. This mirrors the way the Church glorifies God through obedient submission to His Word.

As Paul deals with the subject of God’s order in I Corinthians 11, he addresses the question of hair length. Hair length and style has continually been a major source of identity for both men and women. Short hair or the uncovered head identifies men while long hair or the covered head characterizes a woman’s feminine appearance.

In his attempt to destroy God’s image, ratan has attacked the roles that were ordained for men and women. In the destruction of this vital area, God’s image and eternal plan are distorted. As these roles become convoluted, it is increasingly difficult to tell who is who. Men sport ponytails and braids while women have masculine haircuts. The onset of “unisex” clothing and hairstyles should not be considered innocent. A hidden agenda is behind it all—the eradication of God’s image.

Our hair is indicative of our relationship with God, portraying submission or rebellion. Lucifer, having been the “covering” cherub at one time, realizes completely the significance of the covered and uncovered heads. In light of this, the Church must seek to protect the power that God has invested in us. The darker the night, the brighter the light of God’s glory will shine forth as we reveal His likeness in the earth. We must beware of any action on our part that would distort the reflection of God’s glory.

The question has been asked in discussions about hair length, “Am I permitted to dye my hair?” Should you alter God’s glory in this manner? Once again we go to the Word of God to find the answer to these complex questions.

King David declared, “For thou hast possessed my reins: thou hast covered me in my mother’s womb.”‘ This Scripture tells us that God is creatively and actively involved in the development of human life. The psalmist wrote, “Thy hands have made me and fashioned me: give me understanding, that I may learn thy commandments.”‘ As the Master Designer, He decided upon the unique characteristics of each person. He chose our personalities, facial features, and the color of our skin, hair, and eyes. We are the handiwork of God.

Jesus said, “Which of you by taking thought can add one cubit unto his stature?’ All the mental concentration that you can muster will not make you any taller. In the same vein of thought, Jesus stated in an earlier passage, “Neither shalt thou swear by thy head, because thou canst not make one hair white or black.”‘ He is saying that it is humanly impossible to change the color of your hair because the roots will always retain their original color. It may be coated with hair dye; nevertheless, it has not been permanently modified. If you dye your hair, God’s master design will be marred, altering His image in your life.

Questions we might ask ourselves concerning hair dye are, “Why would I want to dye my hair, and what is my motivation?” Does God have anything to say about white or silver hair? Turn to Proverbs 16:31, where the wise man Solomon wrote, “The hoary head is a crown of glory, if it be found in the way of righteousness.” We know that the man’s short hair and the woman’s long hair are reflections of God’s glory. However, this verse of Scripture tells us that as a person’s hair whitens with age, it transcends to a new level of beauty, becoming a crown of glory. A crown is a royal headdress. Instead of cursing those white hairs, bless them. God is creating a royal headdress of glory upon your head.

Solomon declared in Proverbs 20:29, “The glory of young men is their strength: and the beauty of old men is the grey head.” God says the gray head is a source of beauty. He designed the aging process so that your hair and skin color change together in order to produce a dignified beauty in your latter years. As you age, you become a greater reflection of the Ancient of days.

Twice in the Scriptures God allows us to have a glimpse of His personage. Daniel described Him, “I beheld till the thrones were cast down, and the Ancient of days did sit, whose garment was white as snow, and the hair of his head like the pure wool: his throne was like the fiery flame, and his wheels as burning fire. “8 John the Revelator declared, “And in the midst of the seven candlesticks one like unto the Son of man, clothed with a garment down to the foot, and girt about the paps with a golden girdle. His head and his hairs were white like wool, as white as snow; and his eyes were as a flame of fire; And his feet like unto fine brass, as if they burned in a furnace; and his voice as the sound of many waters.”

The hair color that God chose for Himself is white, symbolic of His total and complete purity. In like manner,

King David declared, “For thou hast possessed my reins: thou hast covered me in my mother’s womb.”‘ This Scripture tells us that God is creatively and actively involved in the development of human life. The psalmist wrote, “Thy hands have made me and fashioned me: give me understanding, that I may learn thy commandments.”‘ As the Master Designer, He decided upon the unique characteristics of each person. He chose our personalities, facial features, and the color of our skin, hair, as your hair whitens with age, it symbolizes the purity of your faith that has been tried in the fire. You are an even greater reflection of God’s glory and holiness in a dark world.

There are two things that you should never touch—God’s vengeance”‘ and glory.” If the glory of God is not handled properly, serious consequences are the outcome. When Lucifer ceased to protect the glory, he no longer reflected it. Let us vigilantly defend the glory resting on our heads, refusing to compromise in any area of consecration. May the anointing oil flow from our heads down to the skirts of our garments. It all starts at the top!

The above article “It All Starts at The Top” is written by Ruth Rieder. This article was excerpted from chapter three in Rieder’s book Reflecting The Glory.

1 thought on “It All Starts At the Top”