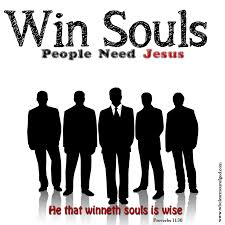 “He left Judea, and departed again into Galilee. And he must needs go through Samaria. Then cometh he to a city of Samaria, which is called Sychar, near to the parcel of ground that Jacob gave to his son Joseph. Now Jacob’s well was there. Jesus therefore, being wearied with his journey, sat thus on the well: and it was about the sixth hour. There cometh a woman of Samaria to draw water: Jesus saith unto her, Give me to drink” (John 4:3-7). Oh, where would we be without this model for soul-winning? Here and in John 3, we have the only dialogues that focus purely on soul-winning in all the gospels. Without these stories, we would be much amiss in knowing how to go about “winning a soul to Jesus. We may wish he had given us at least one example of how specifically it is to be done. Glory to God we have an example in the story of the Samaritan woman.

The Distinction between Witnessing and Soul-winning.

For the purpose of this letter, let me define these terms: in witnessing, we identify ourselves with Jesus, and in soul-winning, we go beyond that identification, making an effort to actually lead a soul to Christ.

We are encouraged to witness from many passages in the Bile, such as Proverbs 3:5, 6 “Trust in the Lord with all thine heart; and lean not unto thine own understanding. In all thy ways acknowledge him, and he shall direct thy paths.” This tells us that if we want to be led by the Holy Spirit, we must identify ourselves with the Lord in all our ways.

Jesus also stressed the importance of witnessing in Luke 9:29: “For whosoever shall be ashamed of me and of my words, of him shall the Son of man be ashamed, when he shall come in his own glory, and in his Father’s and of the holy angels.”

In a practical way, we identify ourselves with Jesus. For example, we witness when we meet someone at the gas station or at a bank. We may say, “We surely, want to thank the Lord for this beautiful day, “or “I am thankful for Jesus’s and satisfy his command, “In all they ways acknowledge him.”

However, important as such a witness is, in many situations, God wants us to go beyond that. He wants our witness to develop into an effort and determination whereby we are truly endeavoring to win a soul to Christ. Witnessing is similar to throwing bait to a fish, but soul-winning is catching that fish.

In John 4, we find some basic principles for soul-winning.

It is the Holy Spirit who led Jesus through despised Samaria from Galilee to Jerusalem! And, of course, to follow the leadership of the Holy Spirit always requires self-denial. Self will never, and can never, be led by the Holy Spirit. It must be denied, our plans being laid at the foot of the cross.

We must realize that we are all called upon to win souls.

In John 4, we find some basic principles for soul-winning.

We must be led by the Spirit: “…he must needs go through Samaria.”

John 4 is the model for soul-winning, and it is a model to be imitated by all of us even though the circumstances may vary widely. When Jesus said “as my Father hath sent me, even so send I you” (John 20:21), he meant, among other things, we were to give ourselves to soul-winning, even as he did.

At his ascension, Jesus’ disciples asked him, “Lord wilt thou at this time restore again the kingdom to Israel?” (Acts 1:6). And Jesus’ last words were related to soul-winning: “It is not for you to know the times or the seasons…. But ye shall receive power… and ye shall be witnesses” (vv. 7,8). The disciples wanted to know about prophecy, about the whens and how’s, but Jesus said: Forget it – be witnesses!

Too many believers are wrapped up in prophecy, but they do nothing toward leading souls to Christ.

We must press through when we don’t feel up to it: “Jesus therefore, being wearied with his journey, sat thus on the well” (John 4:6).

Jesus was tired. It was noon. The sun was mercilessly blazing upon his head. Jesus wanted to rest. Rest was on his mind. When you have rest on your mind, you do not feel like witnessing.

We may make a host of excuses: “I am exhausted… I don’t feel in the spirit… I don’t know what to say… There will be a better time… Surely, this is not God’s time… Somebody else will reach them better,” etc..

If we allow feelings to govern our soul-winning – we might as well forget it! Those who only make their beds, clean their houses, take out the garbage, visit the sick, and pray when they feel like it, are not fit for the kingdom. A soul-winner goes by three solid facts: he is saved, the poor sinner is lost, and God has said, “Rescue the perishing.” He does not go by feelings. In fact, our very weaknesses and inadequacies are the qualifications we need to trust the Lord with all our heart and to engage his all-sufficiency.

Let us consider three barriers Jesus had to break down in his encounter with the Samaritan woman.

If you dream about the ideal soul-winning situation, it will never happen. Every soul-winning encounter I have had looked impossible – some more than others.

In many places in the Middle East, there are barriers between men and women. Furthermore, a single man and an adulterous woman alone at a well was an uncomfortable situation. There were only two options for Jesus: to leave, or to witness. Jesus chose to abandon accepted, earthly etiquette, choosing instead to witness. In doing so, he greatly surprised his disciples, for it says, “And upon this came his disciples, and marveled that he talked with the woman…” (v. 27a).

The Samaritan population arose during the Assyrian occupation, were the children from mixed marriages between Jews and Assyrians. These people had adopted the five books of Moses, they had a messianic expectation, and they expected a temple to be rebuilt in Samaria. The Jews hated these “corrupted competitors.” Hence, no dealing with the Samaritans. But Jesus broke through this barrier also. The Holy Spirit led so, and divine love did so! When you are walking in the Spirit, you must not allow any barriers to stop you.

Many people start to witness, stepping into the way of soul-winning, but when the barriers come up, they become weary and quit before the battle is won. They quit when they are confronted with blank stares of disinterest, with statements like, ‘I’m a Hindu,” or “I have my own religion,” or “Christians are hypocrites.”

The Samaritan woman was an adulteress. She could have been a prostitute, or the town sinner. Scholars tell us that it was uncommon in that day for someone to go to a well to draw water in the heat of high noon, except for the outcasts. This woman was a woman who had no morality. To her, there was no sin – only pleasure and then disappointment.

Why witness to the wicked, to sexual perverts, to the immoral, or to the rebellious? Why witness to a man who has tattoos all over his arms and chest, holding a glass of beer in one hand and a cigarette in the other, with pornographic pictures on his walls? Friend, is that a barrier to press through, or is it a stop sign to give up and back off? Oh, keep on, my friend. Didn’t Jesus say, “Verily I say unto you, That the publicans and the harlots go into the kingdom of God before you” (Matt. 21:31b). Rejecting a religion of escapism, soul-winners see saints in sinners and encounter them at every level of wickedness. So Jesus said, “Go, call thy husband…” (v. 16).

Conviction will not fall until you deal with the sin of the person you want to win. It will not do for you to talk about sin in general. You must talk about, and deal with, the sin of the person you are trying to win. It is not the world’s sin that keeps the sinner from God, but his sin. If you are not dealing with that individual’s sin, leading to a prayer of confession, you may be doing great damage. If there is no conviction of sin, there is no confession. If there is no confession, there is no forgiveness and cleansing. In this process of convicting a sinner, more often than not, the sinner will become perturbed, offended, or angry with you. Do not let this deter you. I once witnessed to a man. After I left, he said to his wife, “I never, ever want to see that preacher again.” Three months later, I returned anyhow, and the man gave his heart to Jesus immediately and became my friend.

The woman acknowledged her sin, but now, as the conversation was getting “too hot” for her, she introduced a controversial subject to change the conversation: “Our fathers worshipped in this mountain; and ye say, that in Jerusalem is the place where men ought to worship” (v. 20). When you get to the personal sin issue, the sinner gets nervous, and the devil gets nervous, and he puts in his last attack: his diversion is to change the subject. And the soul-winner who wants to be kind, and look good, and still be liked, will fall for the trap and go along with the diversion. Oh, how many have abandoned the course to win the lost by giving in to diversions?

Soul-winning Requires the Revelation of Christ.

“Jesus saith unto her, I that speak unto thee am he” (v. 26). In the whole process of soul-winning, Christ must shine through you – his love, his compassion, his holiness, his firmness and kindness — so that the sinner will be drawn into the kingdom. Yes, the Samaritan woman became the first Gentile missionary. Indeed, Solomon said, “…he that winneth souls is wise” (Prov. 11:30). May you be wiser from now on in this great calling of God?

The above article,” Jesus A Model Soul Winner” was written by W.A.Tozer. The article was excerpted from www.wgbd.org/tozersoul.html.

VIEW OUR ENTIRE SELECTION OF MINISTRY RESOURCES FOR ISSUE 24-9