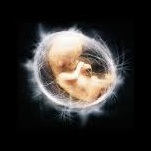 “Before I formed thee in the belly I knew thee; and before thou camest forth out of the womb I sanctified thee, and I ordained thee a prophet unto the nations” Jeremiah 1:5

A professor at UCLA Medical School presented the following case history to his students: “A woman who suffers from tuberculosis is pregnant. Her husband has syphilis. There are three children in the family. One is blind, another deaf, and the other suffers from tuberculosis. Another child died in infancy. Now a child is on the way. The class was then asked, “Under the circumstances, would you recommend an abortion?” Most of the students recommended the abortion. Their Professor then informed them: “Congratulations, you’ve just killed Beethoven!”

When is a baby-a baby? I believe that a baby is a baby from inception-from the time a live sperm enters and fertilizes the mothers egg.

God sees the fetus as a baby. When referring to John the Baptist, yet unborn, He said, “For he shall be great in the sight of the Lord, and shall drink neither wine nor strong drink; and he shall be filled with the Holy Ghost, even from his mother’s womb” [Luke 1:15]. The Bible goes on to say that, “When Elizabeth heard the salutation of Mary, the babe leaped in her womb” [Luke 1:41].

How can a woman doubt that it is a baby she is carrying as she feels movement within her? What father can question the presence of a child as he feels the child ‘kick’, when they lie together in bed?

Would Jesus be pleased with the following statistics?

* In many areas of our country, abortions actually outnumber live births.

* 40% of abortions are performed on women who have aborted other babies also.

* 98% of abortions are for reasons other than rape, incest, or the mother’s life.

* 33% of abortions are performed on teenagers without their parent’s knowledge.

This same source went on to say that in testimony given at government sponsored public hearings, the family planning clinics do not even refer to the unborn baby as a fetus. The baby is dehumanized by referring to the fetus as ‘products of conception’ or ‘uterine contents’. The heart of an unborn baby, however, begins to beat 18 days after conception. How can one then say that a baby is not a baby until birth?

There has definitely been a change in our nation toward the issue of abortion. In 1963, Planned Parenthood, stated, “An abortion kills the life of the baby after it has begun.” Today, they have become the leaders in the abortion business with revenues generated from abortion of over $48,000,000 in 1997 alone. In this same year, they performed over 165,000 abortions, or nearly one out of every eight abortions performed in the U.S. [Oregon Right to Life]

Despite the fact that many in the pro-abortion movement cite reasons such as rape or incest, most abortions are still done for convenience.

Let’s look at the main reasons given as cited in the IBC Perspective:

“Baby would interfere with work.” 75%

Ronald Regan once said, “I have noticed that everyone who is for abortion – has been born.

God views the unborn as a child-not to be discarded just because it is not convenient for parents today.

God commanded, “Thou shalt not kill.” Rather than kill the unborn, let us actively look for good homes into which we can place these babies after birth.

Have you ever considered adopting one of these treasures? Remember, if you save one for eternity, it is worth more than the entire world.

It is one thing to throw stones at the abortionist and picket their doorways-it is another to help one girl in trouble and to save one baby for eternity. Let us not only curse the darkness but also let us light a candle for love and truth.