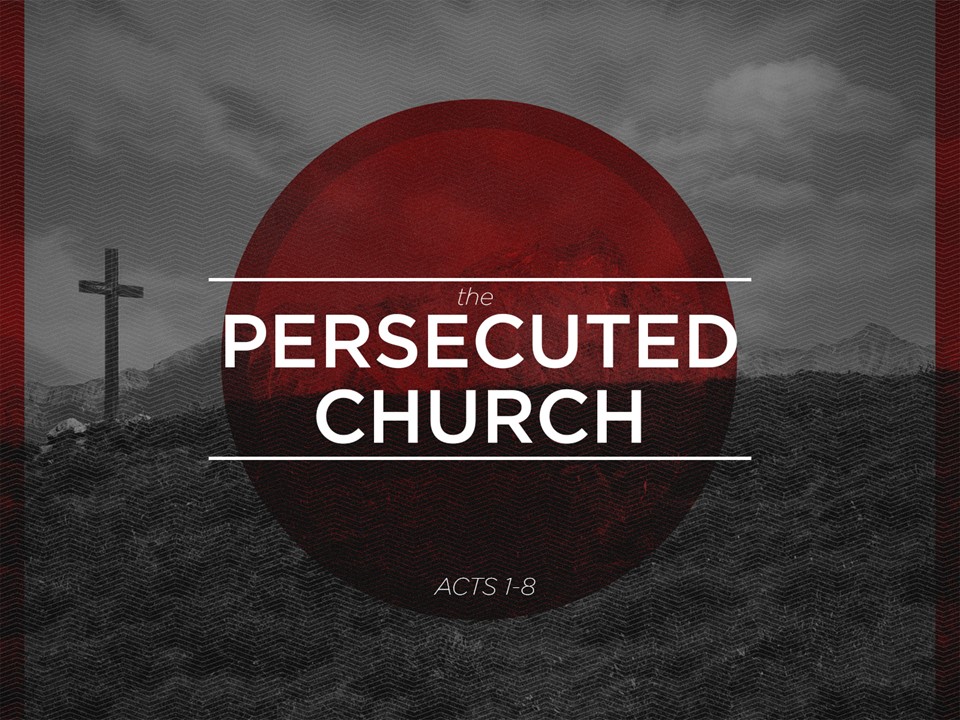 A. Persecution Foretold:
Scriptural References:
“But he shall receive… with persecutions” (Mark 10:30).
“They shall lay hands on you, and persecute you” (Luke 21:12).
“The servant is not greater than his Lord. If they have persecuted me, they will also persecute
you” (John 15:20).

1. Jesus had warned his disciples that they could expect to be persecuted.
2. This persecution began with the arrest of Peter and John following the healing of the lame man at the gate beautiful.
3. The persecution was started by the Sadducees, elders, rulers and scribes (Acts 4).
4. The Sadducees persecuted them because of the preaching of the resurrection (Acts 5).
5. These persecutions were permitted by the Lord and accomplished a definite
purpose in the growth of the church.
6. The persecutions were used in scattering the church so that the gospel message might be preached everywhere.
7. The persecutions kept the church strong and developed strong faith as the saints prayed and witnessed the power of God manifested to deliver them.

B. Early Persecutions:
1. The first persecution was directed against Peter and John following the miraculous healing of the lame man.
2. The apostles were thrown into prison over night.
3. When brought before the Council Peter preached a marvelous sermon.
a. Instead of being the accused, he became the accuser.
b. Threatened with violence and dismissed.
4. The second persecution was directed against all the apostles (Acts 5:17-42).
5. The religious leaders took all the apostles and threw them into prison.
a. God’s angel delivered them.
b. The next morning they found the apostles were gone.
c. They were in the temple preaching the Words of Life.

C. Words To Take Note Of:
1. “So is also the Holy Ghost, whom God hath given to them that obey him.” (v.32)
a) Peter makes it clear that obedience is necessary to receive the Holy Ghost.

2. “Let them alone: for if this counsel or this work be of men, it will come
to naught: But if it be of God, ye cannot overthrow it; lest haply ye be found against God.”
b) The wisdom of Gamaliel (Paul’s teacher) should also be noted.

D. The Persecution of King Herod (Acts 12:1-25):
1. King Herod brought this fifth persecution upon the church.
2. To win the favor of the Jews, Herod had James the brother of John killed.
3. Herod saw that this pleased the Jews and seized Peter planning to kill him.
4. But he did not want to kill him until after the rituals of Passover.
5. The church went to earnest prayer and God delivered Peter the night before his planned execution.
6. Peter was sleeping with two chains and four soldiers.
7. But an angel of the Lord delivered Peter that night.
8. Peter went to the house of Mary, John Mark’s mother, where the church was praying.
9. We should note the horrible death of Herod. The very thing, which he desired, the applause and acclaim of the people brought judgment and death.
10. When the people shouted, “God’s voice, not a man’s!” Herod accepted this acclaim and died a horrible death.
11. History states that Herod immediately was seized with violent internal pains and he lingered in agony for five days before he finally died.

E. Peter’s Deliverance:
The story of Peter’s deliverance is a wonderful illustration of what God does when He delivers a sinner from sin. This passage of Scriptures makes a wonderful text for a gospel message.
1. The sinner’s condition is described by Peter’s condition in prison bound by chains.
2. A light shone first.
3. Peter was smitten on the side next to the heart – this speaks of conviction.
4. He was told to arise – this he had to do first.
5. Then the chains fell off.
6. Then Peter was told:
(a) Gird thyself,
(b) Bind on thy sandals,
(c) Put on thy garment,
(d) Follow me.
7. The gate opened on its own accord.
8. Finally, Peter was able to say; “NOW I KNOW.”

F. The Final Record of Peter’s Ministry:
“And he departed, and went into another place.” (Acts 12:17)
1. Apart from a brief mention of Peter appearing and speaking at the first church council (Acts 15) the above Scripture completes the record of Peter’s ministry.
2. He went into another place but nobody knows where he went.
a. Roman Catholic Church claims he went to Rome but there is no proof.
b. He simply disappears.
c. He had used the keys and unlocked the door to the Kingdom.
d. This is all we need to know regarding the ministry of Peter.