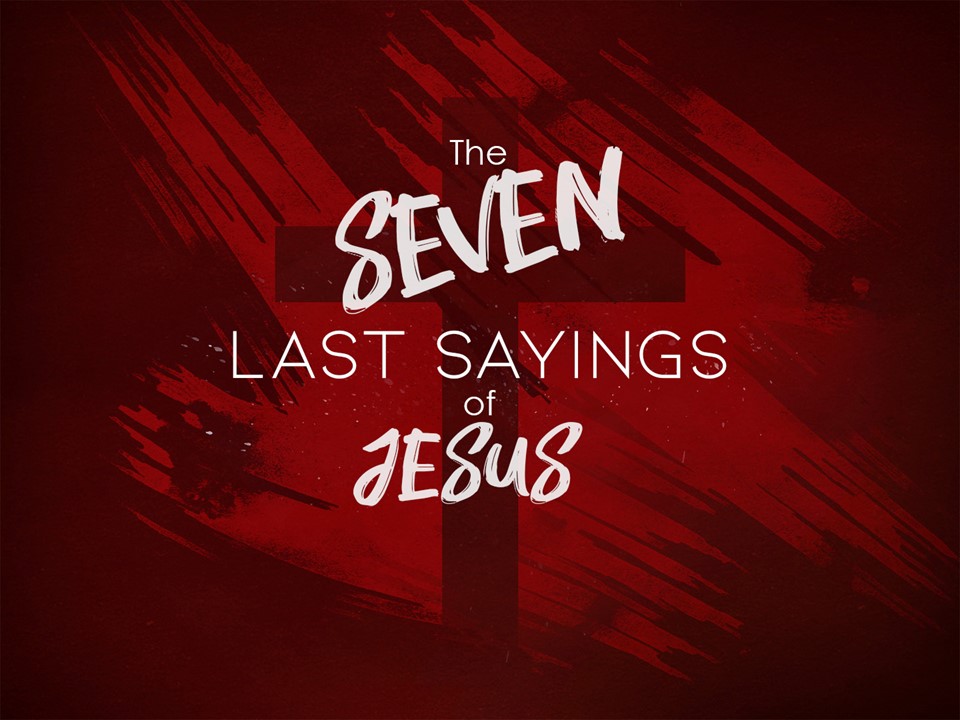 • The words that Jesus spoke from the cross were very expressive and full of deep meaning.
• For this reason we shall take this lesson to consider carefully and thoughtfully these last sayings of our Lord while in the agony of death.

“Father, Forgive Them; For They Know Not What They Do” (Luke 23:34)
• At the moment when His agony was at its worst Jesus sought excuses for the conduct of His enemies and tormentors.
• The victims of death by crucifixion generally shrieked, cursed and spat at the spectators and executioners.
• No such evil word escaped the lips of Jesus, no word of complaint, nor no prayer for mercy.
• Jesus pitied His tormentors more than He was sorry for Himself.
• He thought not of His own suffering but His heart was stirred and moved on behalf of the ones who were putting Him to death.
• “They know not what they do.
• His great heart of love could forgive and even pray for His enemies while He was in extreme agony.

“Today Shalt Thou Be With Me In Paradise” (Luke 23:43):
• These words were spoken to the thief who repented and praye, “Lord, remember me when thou comest into thy kingdom.”
• We know that this thief had repented for he had confessed his guilt and acknowledged that he was being punished justly.
• “Dost not thou fear God, seeing thou art in the same condemnation? And we indeed justly; for we receive due reward of our deeds: but this man hath done nothing amiss.”
• After he had made such a confession, he then confessed his faith in Jesus and requested that he be remembered in His kingdom.
• In the agony of death Jesus was more than willing to listen to such a prayer.
• To forgive sins and justify a guilty sinner even upon the cross was a crowning act of God’s grace.
• This showed clearly that even in the moments facing death itself Jesus had not forgotten the purpose of His coming into the world “to save sinners.”
• He came not to minister unto Himself but to others.
• This was true right to the end.

“Woman, Behold Thy Son! … Behold Thy Mother!” (John 19:26-27):
• No physical anguish could cause Jesus to forget the needs of His beloved mother.
• The agony of death itself could not cause Jesus to forget His responsibility.
• His relationship to Mary had been that of an obedient son.
• Apparently Joseph had died some years before this and Jesus, being the eldest son, had the responsibility of providing for His mother.
• He was unwilling to commit this responsibility to His unbelieving half-brothers.
• He knew who would look after her the most faithfully and with tenderness and love – none other than John the Beloved John accepted this charge and took her to his home where she dwelt the rest of her life.
• Of course, before leaving for John’s home in Galilee, she first received the Ghost Holy in the Upper Room on the Day of Pentecost.

“Eli, Eli, Lama Sabachthanni? My God, My God, Why Hast Thou Forsaken Me?” (Matthew 27:46):
• This bitter cry from the cross has been greatly misunderstood by many.
• Those who heard Him did not understand and thought that He was calling for Elijah to help Him.
• People today still find it difficult to understand this cry.
• They feel that it contradicts the fact of His Deity.
• To understand this we read II Corinthians 5:21, “For he hath made him to be sin for us, who knew no sin.”
• He laid upon Himself the iniquity of us all.
• He became our scapegoat carrying the awful load of sin and paying the price for sin.
• The humanity of Christ had to taste of this awfulness to the full.
• Sin separates from a holy God.
• Jesus Christ had to experience this terrible sensation of a separation from God.
• Actually God was there all the time for the true nature of Christ did not change at any time.
• There was no moment when Jesus Christ was not God manifested in flesh.
• Certainly not here and actually God had not forsaken Him.
• Jesus had to feel the way a lost sinner feels without Himself having sinned.
• Jesus had to pay the price alone and taste death, spiritual – death for every man.
• Spiritual death is broken communion.
• Jesus had to taste of such broken communion, the first and last He ever experienced in those hours when darkness lay upon the earth and upon His soul.
• This was the awful cup that He had to drink from and from which He drew back from in the Garden of Gethsemane.

“I Thirst” (John 19:28):
• Dizzy, swooning, feverish – a world of distress is compressed in two words: “I thirst.”
• He, who had made the world with rolling rivers, sparkling lakes, and spraying fountains, now longed for a drop of water.
• The wealthy women of Jerusalem had a fund of money to provide wine for those who died in crucifixion but Jesus would not take it.
• He wanted to die sober and so refused the wine.
• But when the soldiers soaked a sponge in vinegar and pressed it against the hot lips of Christ, He accepted it.
• The vinegar was an insult, stinging acids for a dying Christ.
• He accepted the vinegar, the insult.

“It Is Finished” (John 19:30):
• The first recorded words of our Lord were: “Wist ye not that I must be about my Father’s business?”
• He had so lived that now upon the cross He could utter the victorious cry of full achievement; “It is finished!”
• The work of redemption, which was the purpose of His life and ministry, had been completed and the plan of salvation established.
• It is significant to compare this saying of our Lord upon the cross with out of the temple saying, “It is done” (Revelation 16:17).
• Those who refuse to accept the “It is finished” from Calvary’s Cross will be forced to accept the “It is done” of judgment.

“Father, Into Thy Hands I Commend My Spirit” (Luke 23:46):
• This final utterance of our Lord was a quotation from Psalm 31:5, “Into thine hand I commit my spirit.”
• It is claimed that this prayer was used in the time of our Lord as an evening devotion.
• It should be remembered that Jesus had said, “…lay down my life, that I might take it again” (John 10:17).
• Jesus had the power to dismiss His spirit and then take it up again.
• This is exactly what happened.
• Jesus dismissed His spirit.

A. What spiritual significance is taught by each of our Lord’s sayings on the cross? Give the Scriptural reference and then what lesson we might learn from each.