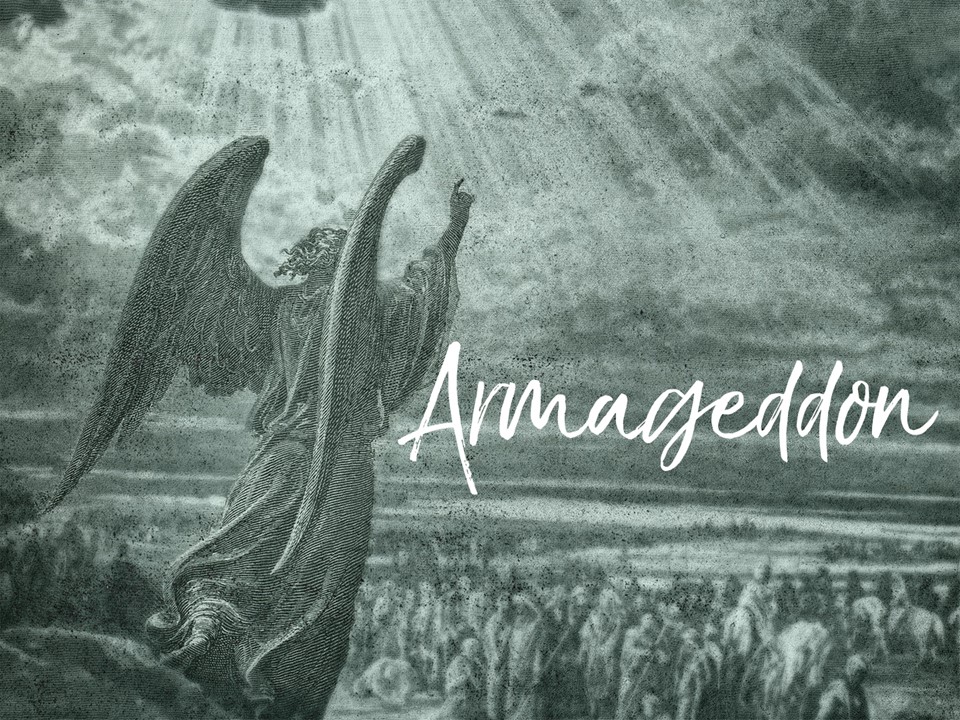 A. ARMAGEDDON:
Theword “Armageddon” comes from two Hebrew words meaning”the hills of Megiddo.” It is a region in the north of Palestine among the hills of Megiddo, surrounding a vast plain called the Valley of Jehoshaphat.
It is situated on the south side of the Plain of Esdraelon, at the entrance of a pass across the Carmel mountain range. This was the main highway between Asia and Africa, the meeting place of armies from the East and the West. It is claimed that more blood has been shed here than any other spot on earth. It was at Megiddo, in the First World War, that General Allenby (1918) broke the power of the Turkish army. Three famous mountains overlook this valley: Carmel, Gilboa and Tabor.
This will be the scene of the final decisive battle between Antichrist and Christ. It is here that the stone will smite the ten-toed kingdoms as described in the second chapter of the prophecy of Daniel. The smitten Christ of Calvary will become the smiting stone. This valley is approximately ten miles by forty miles in length. It should be noted that in Revelation 14:20, blood is to come out of the winepress for the distance of 1,600 furlongs.This is a distance of 184 miles.
To explain this we need to read in Isaiah 63:1 that Christ comes from Boxrah, the capital of Edom, about 30 miles southeast of the Dead Sea. From this point the 184 miles would reach all the way to Tyre. From this we can conclude that the Battle of Armageddon will involve the whole land of Palestine but the Valley of Jehoshaphat will be the focal point.
It is at this battle that the tribulation ends and the millennium begins.

B. ARMAGEDDON DESCRIBED IN REVELATION:
1. REVELATION 14: 14-20:
Armageddon does not take place until the end of the Tribulation with the pouring forth of the seventh bowl judgment. However, here there is given a preview of this final battle. It is a foreglimpse of what is to come.
Jesus is seen sitting upon a white cloud, wearing a crown of gold and holding in His hand a sharp sickle. Three angels are seen coming out of the temple, each in turn crying to Jesus to thrust in the sharp sickly and reap the ripened clusters of grapes. The nations are likened to grapes to be harvested and thrown into a great winepress.
A winepress is a big vat for the treading of grapes to be crushed in order to release the juice. Here the wicked are cast into a winepress and are trampled by our Lord Himself. Just as the grape juice stains the clothes of the one who is doing the trampling, so the garments of Jesus is stained by the blood which will splash as high as the horses’ bridles or four feet.

2. REVELATION 16:16-21:
The battle takes place with the pouring forth of the seventh vial judgment. There is a great earthquake accompanied with thunder, lightning and hailstones falling, which weigh around 100 lbs. each. Islands and mountains disappear and there is a great change upon the surface of the earth.

3. REVELATION 19:11-21:
Chapter 17 and 18 are a parenthesis between 16 and 19. Therefore the description of Armageddon found here is simply a continuation of chapter 16.
John saw heaven opened (19:11). A door was opened in Revelation 4:1 when Jesus came for His saints. Here a door again is opened when Jesus will come with His saints. This is the Revelation of Christ at His Second Coming.
He is seen coming on a white horse accompanied with the armies of heaven also riding on white horses and clothed in fine linen. It should be noted that only Christ does the fighting. The armies of heaven are simply spectators.
Jesus is called Faithful and True, and is clothed in a vesture dipped in blood. In the battle Jesus smites the nations with a sharp sword which proceeds from His mouth. He treads the winepress of the wrath of God. He shall rule the nations with a rod of iron.
The beast and the false prophet are thrown alive into the lake of fire. The rest of the armies are slain with the sword and their bodies are left rotting upon the plain. An angel calls for all the vultures and carrion eaters to come to feast on the flesh of kings, captains and mighty men. This is called the supper of the great God. What a contrast between this and the marriage supper described earlier in the same chapter.

C. ARMAGEDDON DESCRIBED IN OTHER SCRIPTURES:
1. ISAIAH 63:1-6:
Here Armageddon is likened to a winepress, which is trodden by Jesus Christ. It is plainly stated that Jesus alone will destroy his enemies and gain the victory. Although other Scriptures state that He will be accompanied by the Saints, yet He alone fights the battle and gains the victory. It is His garments, which will be stained with the blood of His enemies.
2. JOEL 3:9-17:
Again we are given a picture of a winepress. The prophet stated that here the Lord will judge the nations. Also is described the signs that will take place in the sun, moon and stars.
3. MATTHEW 25:31-46:
This is not the Great White Throne Judgment described here but rather the judgment that will take place at His Second Coming. It is known as the judgment of the nations. It is here that Jesus Christ will return to earth and will set up His Kingdom for one thousand years.
4. II THESSALONIANS 1:6-10:
The apostle Paul gave a description of our Lord’s revelation at His Second Coming. He shall be revealed: a. with His mighty angels; b. in flaming fire; c. taking vengeance on them that know not God; d. He shall be glorified in His saints and admired by all that believe.

D. THE BATTLE OF ARMAGEDDON: AtthebattleofArmageddontheBeast,theheadoftherevivedRomanEmpire,willleadthearmies, which come up against Jerusalem. Vast army camps will be on all sides. The plains of Esdraelon will be filled with soldiers and the hills will swarm with armed men. The unclean spirits, working miracles,will have deceived the nations and brought them together to destroy Jerusalem.
The battle is a short one.The Lord appears and there is one mighty blow from above. One flash of glory and the battle is over.
Nebuchadnezzar saw a stone cut out of the mountain without hands (Daniel 2:34) which smote the image upon its feet and broke them to pieces.The accomplishment of this act will take place at the Battle of Armageddon. At this moment the Gentile Kingdoms of the Antichrist will be destroyed.

E. FINAL RESULTS OF ARMAGEDDON:
There will be several immediate results of this great final battle, which may be listed: 1. The armies of Antichrist, which will come up against Jerusalem, will be destroyed; 2. The Beast and the False Prophet will be thrown alive into the Lake of Fire; 3. The rotting bodies of the slain enemies will be eaten by vultures assembled from far and near; 4. Jesus will come to the earth upon the Mount of Olives (Zechariah 14:4) and the mount shall cleave asunder; 5. The devil is bound and locked up in the bottomless pit for 1,000 years; 6. At this time Jesus will institute His Kingdom upon earth with Jerusalem as being the capital.
Armageddon will be one of the most momentous events that the world will ever see.