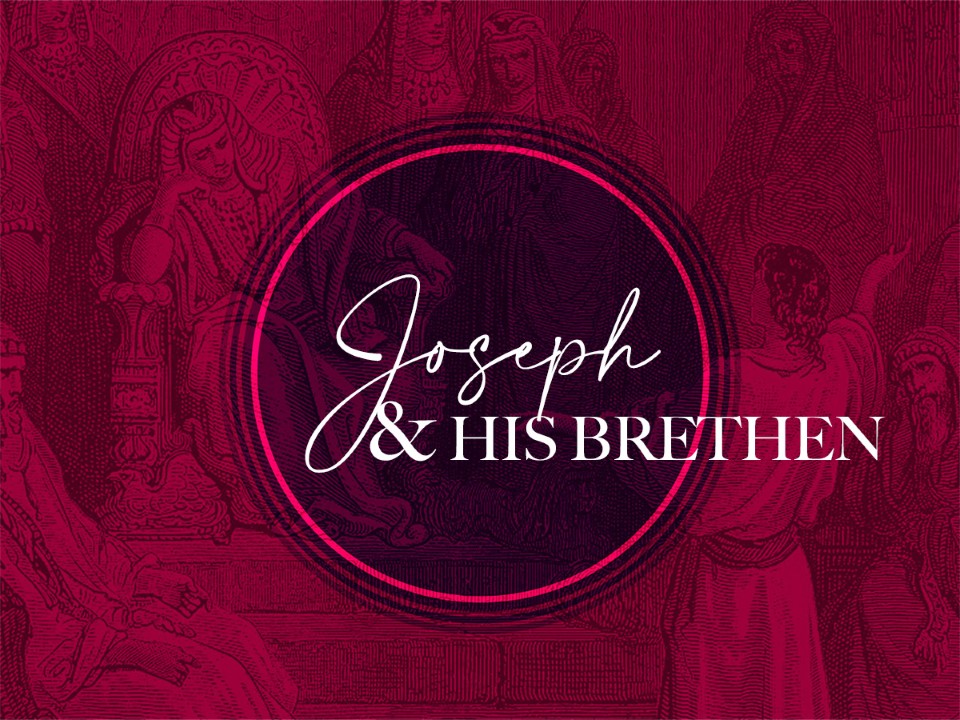 LESSON TWELVE
JOSEPH AND HIS BRETHREN

1. Sold Into Egypt:
a. Joseph was the elder son of Rachel.
b. He was five or six years old when his father left Padan-Aram.
c. While his brothers had been influenced by the old Jacob, he had been raised under the influence of the new Jacob or “Israel.”
d. When we begin to study Joseph we are introduced to him at seventeen years of age.
e. Let us note that in the deception of Joseph’s brethren to their father, Jacob again was reaping exactly what he sowed.
f. Joseph is one of the finest characters in the Old Testament.

2. Sold Into Egypt:
a. His moral purity and upright life must have been a great rebuke to his brethren.
b. Joseph being hated and betrayed by his own brethren and being sold for twenty pieces of silver is a type of Jesus Christ being sold for thirty pieces of silver.
c. Why was it necessary for Joseph to go to Egypt?
d. Years later when Joseph revealed himself to his brethren, he said, “And God sent me before you to preserve you a posterity in the earth, and to save your lives by a great deliverance. So now it was not you that sent me hither, but God…” (Genesis 45:7-8).
e. According to this Scripture it was God who sent Joseph into Egypt.
f. What was God’s purpose behind this?

3. Sold Into Egypt:
a. The commonly accepted reason is that Joseph was sent to Egypt to save the lives of his family during the famine.
b. The purpose of God was greater than this.
c. If we read the sordid story we may understand just why it was absolutely necessary for Joseph to be sold into Egypt.
d. The contamination and spiritual pollution that was being experienced by their association with the Canaanites had to be stopped.
e. There was an absolute necessity of separation.
f. Egypt was essential to the purity of the family of Jacob.

4. Joseph In Egypt:
a. Joseph’s first great test was the hatred and treachery of his own brethren.
b. This was only the beginning, slavery and imprisonment awaited him in Egypt.
c. Joseph came through every trial and testing with flying colors.
d. His conduct and life in Egypt were without fault.
e. He had many reasons for giving in to bitterness, but through it all he kept true to his convictions.
f. Joseph was sold as a slave to Potiphar and here he met a great temptation.

5. Joseph In Egypt:
a. Joseph was described as being a “goodly person and well favored” (Genesis 3 9:6).
b. Potiphar’s wife desired him and tried to seduce him.
c. Joseph stood for the principle that all sins are an attack against God
d. The secret of his victory lay in the question that he asked Potiphar’s wife, “How can I do this great wickedness, and sin against God?” (Genesis 39:9).
e. When this sinful woman took hold of Joseph, we find again the secret of his victory – he fled.
f. We are instructed to “flee fornication.” At those time there is only one thing to do: RUN FOR YOUR LIFE.

6. Joseph In Egypt:
a. Joseph experienced slavery, temptation, and slander and through each he was victorious.
b. He was now thrown into prison and again he prospered for the Lord was with him
c. In prison there were two men, the chief of butlers and the chief of bakers.
d. Both of these men had dreams, which Joseph interpreted and in each case the interpretation came true.
e. The butler was pardoned and the baker was executed
f. After this came two full years of waiting which must have been a real test.

7. Joseph In Egypt:
a. Finally Pharaoh had two dreams which none of the magicians of Egypt could interpret.
b. The butler remembered Joseph and they brought Joseph to Pharaoh.
c. Now came the promotion and elevation to the second most powerful office in the country.
d. With this honor and heavy responsibility came Joseph’s greatest temptation.
e. Joseph did not allow the honor to go to his head but remained upright and true.
f. God was still with him in the administrations of a great country.

8. Joseph And His Brethren:
a. Let us examine a few of the spiritual highlights
b. After twenty years had passed since Joseph had been sold into Egypt, Joseph’s ten brethren came to him to buy corn.
c. They bowed before him with their faces to the earth, thus was Joseph’s dream fulfilled (Gen 42:6)
d. Joseph treated them harshly and accused them of being spies this was to test them
e. To prove them further he kept Simeon bound as a hostage and demanded that they bring Benjamin with them on their next visit.
f. Genesis 42:21-23 is very significant it tells us that their guilty conscience was still troubling them after twenty years.

9. Joseph And His Brethren:
a. Their father Jacob had nursed a guilty conscience for twenty years and they had carried their guilt for the same length of time.
b. The recognition of their guilt showed that considerable change had taken place in these men.
c. On their second journey Judah stood surety for Benjamin (Genesis 43:9).
d. It was Judah’s intercession for Benjamin that gave Joseph all the proof he needed.
e. It was Judah’s self-sacrifice and his plea to take Benjamin’s place in order to spare his aged father further anguish that melted the heart of Joseph.
f. He dismissed all Egyptians from his presence and with many tears made himself known to his brethren.

10. Joseph And His Brethren:
a. It was a beautiful reconciliation and a very happy ending to a tragic and wicked act.
b. It was entirely due to the grace of God and the fact that he overruled and had his will accomplished.
c. “How shall I go up to my father, and the lad be not with me?” (Genesis 44:34).
d. This question of Judah to Joseph is one, which we all should ask if we have loved ones unsaved.

11. The Death Of Jacob And Joseph In Egypt:
a. When Jacob was one hundred and thirty years of age he went down to Egypt and rejoiced to see Joseph again.
b. He was introduced to Pharaoh and lived in Egypt another seventeen years.
c. He died at the age of one hundred and forty-seven years.
d. Before his death he blessed his sons and gave a prophecy concerning each one.
e. After his death his body was embalmed, Joseph and his brethren carried him back to Canaan for burial.
f. Joseph died when he was one hundred and ten years of age.

12. The Death Of Jacob And Joseph In Egypt:
a. His body also was embalmed but his body remained in Egypt until the Exodus of the children of Israel out of Egypt (Exodus 13:19 and Hebrews 11:22).
b. Before we conclude our study we must mention the two sons of Joseph born of a Gentile mother, Ephraim and Manasseh.
c. Each of these became a tribe of Israel and many times is mentioned instead of their father.

LESSON TWELVE
SELF HELP TEST
A. What were the two dreams Joseph had while still at home?
B. How were these dreams fulfilled?
C. Why was it necessary for Joseph to be sent down to Egypt?
D. State THREE testings Joseph had to encounter while in Egypt.
E. How do we know the brethren of Joseph still had a guilty conscience after all these years?