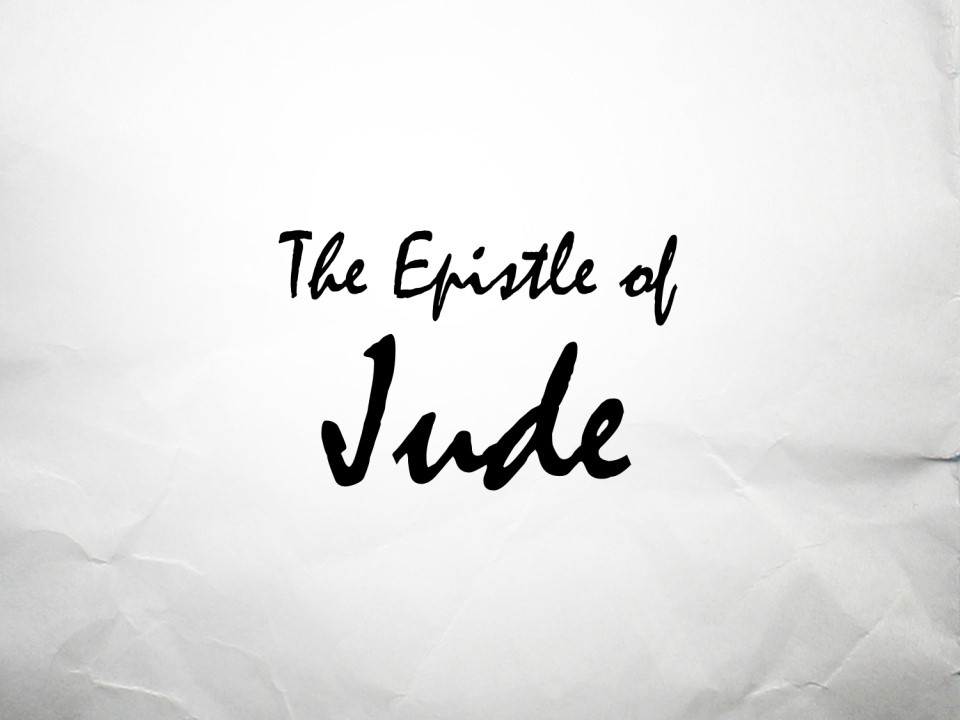 Lesson Twelve
The Epistle of Jude
The Author:
• Jude, the brother of James and half brother of Jesus (Jude 1) wrote this epistle.
• He is mentioned in the following Scriptures: Matthew 13:55 and Mark 6:3).
• Jude was not an apostle.
• It was not until after our Lord’s resurrection that he acknowledged the Messiahship of his brother.
• During our Lord’s ministry upon earth, Jude was an unbeliever.
• It was not until after Jesus appeared to James that Jude was converted.

The Epistle of Jude:
• Although this epistle contains only twenty-five verses, it is a very important book.
• In the matter of dealing with the seriousness of apostasy, it is unsurpassed.
• It contains some similarity to the second epistle of Peter.
• It cannot be proven which epistle was written first.
• Although the date is not known when this epistle was written, it was probably between 70 AD and 80 AD.
• Although the epistle is Jewish in character, it is to be applied to the church everywhere.
• Jude quotes from two apocryphal books: Book of Enoch and Assumption of Moses.
• The fact that Jude quoted from these books does not make them divine any more than if a preacher today picked from Shakespeare.
• In fact, the Apostle Paul quoted from heathen poets.

Salutation:
• Jude speaks of himself as being the following:
• 1. A Servant of Jesus Christ.
• The Greek word “doulos” means more than a servant–it means slave.
• This is the only title he gave himself, a “slave of Jesus.”
• 2. A Brother of James.
• Jude was content with second place.
• He was satisfied to be known as the brother of James.
• Jude writes this letter to Christians who are sanctified, preserved and called.
• This is clearly expressed in the Amplified New Testament, “To those who are called, dearly loved by God the Father, and kept for Jesus Christ.”

Contending For the Faith:
• (Jude 3-4)
• Jude had planned to write to his readers about the common salvation.
• This would have been a general statement concerning the gospel message.
• However, because of an alarming growth in apostasy, he was prompted to write this stern warning exposing the apostates and showing the seriousness of this condition.
• Apostasy is a turning away from the truth.
• It is usually followed by perversion.
• The most serious character of apostasy is that forgiveness and restoration are most difficult.
• The apostate seldom gets back into full fellowship with God.
• The backslider who falls into a single act of sin may be restored through sincere repentance and confession.
• The apostate given is over to delusion and seldom sees his need of repentance.
• Jude described the ungodly men as doing two things: 1) Turning the grace of God into lasciviousness, and 2) Denying the only Lord God.
• These are an attack on holiness and the truth of the deity of Jesus.
• The church is still under attack on these two points.
• Lasciviousness may be defined as a license to sin.
• When the grace of God is taught as excusing sin and the oneness message is destroyed, every evil and corrupt act follows.
• Jude warned that judgment always followed apostasy and it is necessary to contend for the pure faith of the apostles.

Example of Judgment in History:
• 1. Israel: (Verse 5).
• The Lord saved Israel out of Egypt and then destroyed them in the wilderness because of unbelief.
• 2. Fallen Angels: (Verse 6).
• The fallen angels are also mentioned in II Peter 2:4.
• These are the angels Satan led in rebellion against God.
• They are being held in chains of darkness, awaiting judgment.
• 3. Sodom: (Verse 7).
• Sodom and Gomorrah were notorious for homosexual sin or sodomy.
• The fire of God destroyed these cities.
• It is reasonable to suppose that the apostate leaders whom Jude attacked had also descended to sodomy and were perverting the grace of God to try to cover their sin.

Rebellion:
• The condition of apostasy has its beginning in presumption and rebellion.
• Murmuring and complaining characterize it.
• Apostates do not hesitate to criticize and blaspheme those who are greater than themselves.
• Jude referred to Michael who refused to rail against the devil in a dispute over the body of Moses.
• Josephus wrote that God hid the body of Moses lest it be made an idol.
• Apparently this was the responsibility of Michael and the devil tried to hinder.
• At any rate, the lesson given here is that if the archangel would not rail against the devil, we should never speak evil of those in authority.
• Apostates do not hesitate to do so.
• Jude gave three examples of Old Testament characters that resulted in violence:
• 1. Cain.
• He started a new religion based on works, which resulted in violence.
• 2. Balaam.
• He prostituted God’s gift for material gain.
• 3. Korah.
• He led a rebellion against the leadership of Moses and Aaron.
• The apostates in the church were guilty of following the example of these three men.

The Prophecy of Enoch:
• Enoch lived in the days, which preceded the flood and witnessed the sins of that generation.
• He foresaw the Lord’s return at the end of the age.
• This would be preceded by a terrible apostasy.
• He prophesied that the Lord would return with millions of His saints to execute judgment against the ungodly and to prove the terrible things they have done against God in rebellion.
• The fact that Jude quoted from the Book of Enoch should not disturb us.
• He was simply quoting from a book, which was well known at that time.
• It does not sanction the entire Book of Enoch.
• Also we should remember that Jude was writing by the inspiration of God.

Exhortation to Constancy in the Faith:
• (Jude 20-23)
• Jude exhorted his readers to:
• 1. Build themselves up in the faith;
• 2. Pray in the Holy Ghost;
• 3. Keep themselves in the love of God;
• 4. Look for mercy unto eternal life;
• 5. Try to save those who are wavering.
• The expression “making a difference” would seem to refer to those who are wavering between truth and error.
• Many of those still can be helped.
• They were to save as many as possible, snatching them from the very flames of hell.
• At the same time, they must be careful they are not contaminated with their sins.
• They were to hate every trace of sin but be merciful to the sinner.

Benediction:
• (Jude 24-25)
• This is a beautiful doxology.
• It assures the child of God that he will be presented faultless with great joy into the presence of the Lord’s glory.
• This doxology also affirms that there is only one God and He is our Savior.
• Unto Him be glory, majesty, dominion and power, now and forever, unto all the ages of eternity.
• Amen – so be it.

2. When was Jude converted?

3. Name TEN terms used by Jude in describing the apostates.

4. Name the THREE examples in the Old Testament of the sin of rebellion.

5. Write in your own words the “prophecy of Enoch.”

6. Explain the example which Michael, the archangel gave us.