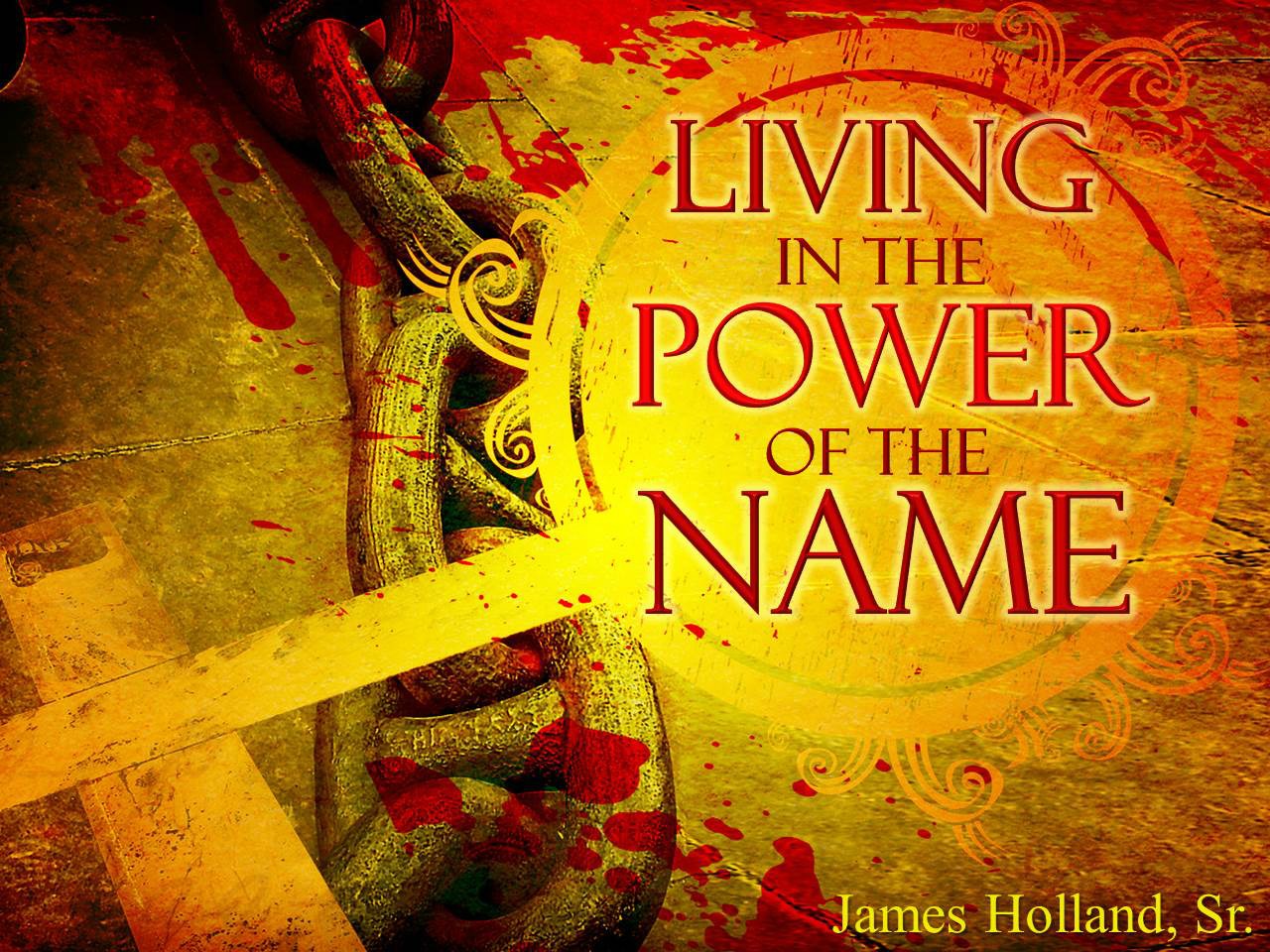 Acts 4:12 declares that “neither is there salvation in any other name – there is no other name given under heaven among men whereby we must be saved.” The name of Jesus is all conclusive. At the name of Jesus three kingdoms are immediately affected. They are the heavenly kingdom, the earthly kingdom, and the underworld or the kingdom of darkness. The writer of Matthew 1:21 declares His name shall be Jesus, for He shall save His people from their sins.

In the days of Jesus, as well as in many cultures today, names carried great meaning and significance. In fact, names are still powerful today. Using the name of Jesus and having a revelation about the power in that name are two very different things. If we are to live in victory, then we must get a revelation about the power of the name of Jesus. When we really know who Jesus is, then we can allow Him to help us find out who we really are. God has potential invested in us that we are not even aware of. Satan will try to convince us that we will never be all that God wants us to be.

Let me show you the importance of a name. Before I share with you the necessity of the name of Jesus in our lives, look at Jacob. First of all, let me remind you that we all seem to have a little bit of Jacob in us. Jacob was one of God’s heroes. He was a limping leader graced to come to know who he was in a personal way. Jacob’s name meant “supplanter” or “trickster”. Jacob finally found himself left alone with God. God cannot accomplish anything with us until we are left alone with Him. It took a midnight meeting and an encounter with God to bring Jacob to himself. Let me say here that sometimes God allows circumstances to be as such to push us into a place with Him where it’s just God and us. While in the place with God, there are no crutches to lean on. In Genesis 32: 24-30, we read the account, God tells Jacob that he is not who he thinks he is. Then, God changes the “trickster” into “Israel,” a prince with God.

Aren’t you glad that God knows who we really are? He will give us a name. Bible names where generally significant as in the case of Isaac, whose name meant “laughter”. His mother broke into fits of laughter when she saw what God had done for her in her winter season of life. The name Naomi meant “pleasant”, yet after some bitter years she changed her name to Miriam, which meant, “I am bitter”.

Life has a way of doing that to us if we don’t have the right name in our lives. In fact, Naomi and her family left Bethlehem, which meant “house of bread” and journeyed to Moab, which meant “land of wash-pots”. How many people do you know that have allowed fear and opinions of others to lead them away from God’s will instead of into it. Moses’ names meant “drawn out”. He was drawn out of the water by Pharaoh’s daughter by the hand of God, so that God could “draw him out” to be the deliverer of the children of Israel.

Let’s talk about the majestic name of Jesus. Why were Mary or Joseph not permitted to name this child? Most parents would be very upset if they were not permitted to even choose the name of their child. Of course, it had been prophesied what His name would be, yet we must understand also that Mary and Joseph, as obedient as they were, could not fully comprehend the all encompassing, far reaching effects that this name would have upon the world, as well as all humanity to come. Mary simply did not understand His destiny. We need to be careful not to let people who don’t understand our destiny, put names on us! Don’t let the rumors of the past stop you from getting into your future.

Names do mean something. A weeping mid-wife holds a stained infant in her arms. This child is all that remains of Rachel. Jacob limps into the tent finding his lovely wife gone and his son born. His emotions are scrambled like eggs in a hot pan. Yet Jacob, with trembling lips, asks the mid-wife what the child’s name is? She responds Rachael called him “Benoni”, which means “son of my sorrow”. With eyes aflame and lips trembling, Jacob shouted no, no, no. He shall not be called son of my sorrow. He shall be called Benjamin, “son of my right hand”. This boy is going to be my strength, not my sorrow. As Benjamin grew, I am sure some of his family tried to tell him what his mother had named him, yet his father would tell him you are who I said you are. We must break the spell of every name that would attach itself to us, in the name of Jesus, like fear, defeat, jealousy, and inferior feelings, just to name a few. When we have the covenant name of Jesus, we break the strength of every other name that would attach itself to us, such as discouragement, failure, and hopelessness.

The early church delivered entire cities from satanic attack in the name of Jesus. His name is strong enough to break the bondage of any other name! We are known in the spiritual world by His name.

Philippians 2:9-10 says, “Therefore God also has highly exalted Him and given Him the name which is above every name. That at the name of Jesus, every knee should bow, of those in heaven, and of those on earth, and of those under the earth” (NKJV). Mark 16: 17-18 says “And these attesting signs will accompany those who believe, in my name they will drive out demons; they will speak in new languages” (Amplified Verse). Only through the name of Jesus can we find out our real potential as a believer.

Let me share just a few of my favorite references in scripture that refer to Jesus.

Are You Married To Jesus?

To use the name of Jesus legally, we must be married to Him! Some people are just content to date the Lord. The Lord impressed upon me that the problem with many people in North America is that they merely want a dating relationship with God. They want his blessing without His constant presents in their lives. They want the excitement of God’s affection and God’s promises, but they do not want the commitment it takes to produce spiritual children for His kingdom. This commitment is to be married to Him, by taking His name upon us in public confession of our faith in baptism. If you want to be your best and have God’s best, you must be married to the name! (Acts 1:8, Acts 8:12, Acts 10:48, Acts 19:5)

When the church gets married to the name of Jesus, the underworld begins to shake. We must realize even many people that have taken the name of Jesus upon them still are not interested in producing children for the King. We are saved to serve and to reproduce, to build the Kingdom of God. It was the revelation of the name of Jesus that empowered the early church to reach their world. We must ask ourselves the question, are we married to Him? Or are we just dating Him? By taking His name on us we become recognized in the spiritual realm by His name. Then when we speak a word or ask for something it’s as though Jesus is there doing it himself. We are then in covenant agreement with Him.

It’s time to release the authority of His name in our lives. At the name of Jesus drugs have to relinquish their hold; alcohol, bitterness, failure, and depression all have to bow and submit to His all-powerful name. When we are married to the name of Jesus, we wear His name. Paul declared that we are to put on Christ; that’s where the power is! Some say, “I have to think about it then make my choice.” My friend, God has already ruled on this issue. God has already chosen for us. He has declared that everything will come under submission to the majestic name of Jesus. When we take on the name of Jesus in our lives, the demons of hell run out of control in the underworld looking for a phone to dial 911 and scream for help! Take His name upon you, and drive some devils crazy. Then watch your circumstances submit to His power and His word. Then, we can truly live with purpose.

One of the most beautiful sounds to ever enter the human ear is the first cry of a newborn baby. It’s the sound of life. With the arrival of life comes responsibility as well as potential. Don’t let anyone steal your purpose. God has given us a life with purpose. The church has a purpose to impact the world. Immediately after the creation of Adam, God put demands on him! Why? Because God knew Adam’s potential; in like manner, our potential is released when we meet the demands to fulfill God’s greater purpose for our lives.

You will never know the extent of your potential until you give it something to do. Jesus, my friend, went to the grave empty (John 19:30). Why? Because he had released and maximized His potential; He had fulfilled what he had come to do. Jesus saw death as the natural next step to take. God never intended for the cemetery to be the resting place for your potential. So don’t get in a traffic jam at the intersection of “if”. WE all have to go through many IF intersections in life’s journey. If I had done this, if I had worked there, if I had lived here, on and on it goes. Until we go through the intersection of IF, we cannot release the purpose of God in our lives. Don’t let the grave be the resting place for your dreams, visions, ideas and plans. No man is born to live unto himself (Proverbs 13: 22).

Decide right now to allow God to have His way in your life. Stop wishing and start willing. Determine to die empty for God so that you may have it all. John 6:12 declares this powerful truth “so when they were all filled, He said to His disciples, gather up the fragments that remain, so that nothing is lost”.

The Bible describes salvation both as a new birth and as an adoption. Viewed either way, we must take on the legal name of our new family. This occurs at baptism since it is part of the new birth and part of our identification with Christ.

This article “Living in the Power of the Name” was excerpted from the book The Battle for Spiritual Maturity written by James Holland, Sr. It may be used for study & research purposes only.