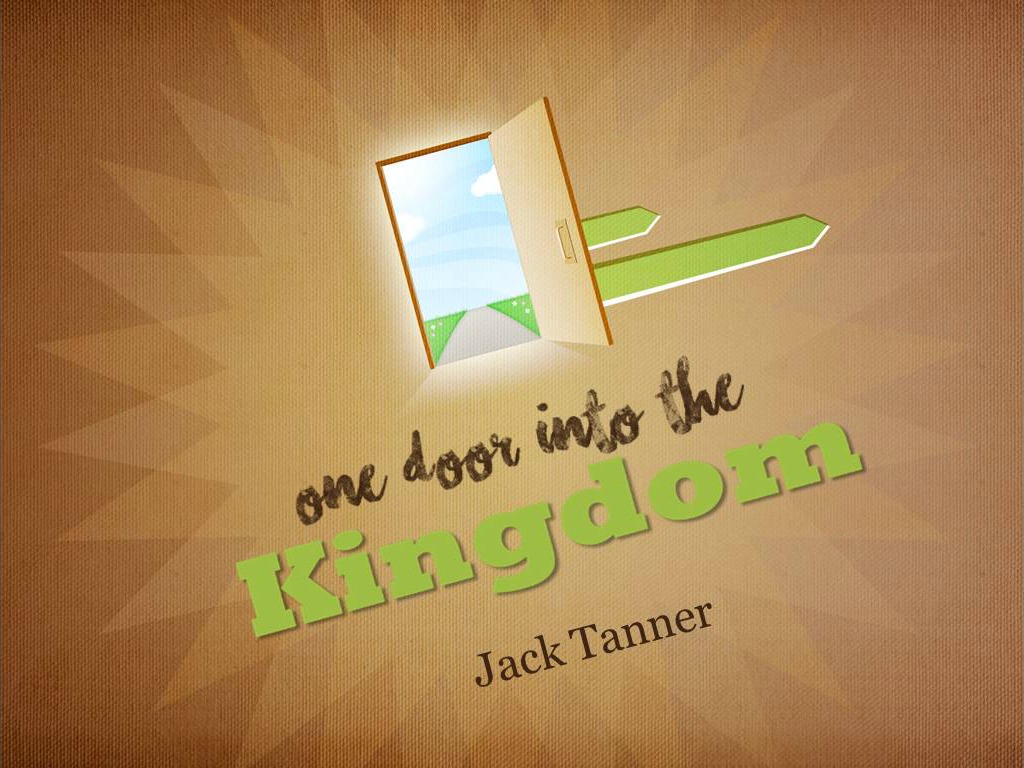 And I will give unto thee the keys of the kingdom of heaven: and whatsoever thou shalt bind on earth hall be bound in heaven: and whatsoever thou shalt loose on earth shall be loosed in heaven (Matthew 16:19). This may be a shock to some people, but the kingdom of heaven is locked, and it requires keys to open the door. The keys were handed from Jesus to His disciples and then to the church.

Men have manufactured many ways to heaven throughout the years, and they seem to be right in their own eyes. But unless people, even those with good intentions, come through the one and only door, they are left standing on the outside. Jesus is that door.

There is a way which seemeth right unto a man, but the end thereof are the ways of death (Proverbs 14:12). The best road to take is the one that leads you to the desired destination. Other roads may be broader, be traveled more, or have more lanes, but where do they end? Many of the superhighways, where you can travel at higher speeds, will not he the best roads if they lead to destruction.

It is not that Jesus wanted His way to remain a secret to many. The Book of Acts opened wide the door to salvation, and that door is still open today. Paul witnessed before King Agrippa and King Festus. For the king knoweth of these things, before whom also I speak freely: for I am persuaded that none of these things are hidden from him; for this thing was not done in a corner (Acts 26:26).

Although there are many religions throughout the world, it would be difficult to find those who have never heard that Jesus came to this earth. The readers may not act on their knowledge, but millions of books have been written on the Christian faith. These books tell all or part of the wonderful story of Jesus’ ministry.

There are organizations that have secret orders and per-form secret acts that are open to only a few. Some take a vow that they will not disclose these rituals or orders, but Christians are told to tell everyone the wonderful truth of Jesus’ coming to earth and that salvation is for everyone.

Paul testified, For I am not ashamed of the gospel of Christ: for it is the power of God unto salvation to every one that believeth; to the Jew first, and also to the Greek (Romans 1:16).

A truth as wonderful as salvation that will take us from a world of sin, disease, and death to a place where we live forever and leave all the former unhappiness sin has brought should be heralded from the housetops.

JESUS IS THE DOOR

I am the door: by me if any man enter in, he shall be saved, and shall go in and out, and find pasture (John 10:9). Jesus told the parable of the Good Shepherd, but the disciples were confused. Jesus explained that He is the Door and the Shepherd, and those who follow Him are the sheep.

Sheep are not the smartest animals, and they can easily go astray and be food for the wolves. The good shepherd must be on guard to keep his flock fed, watered, and safe. Wolves like to prowl during the night, so a safe place must be provided by the shepherd for them to rest. This was usually inside a walled area that had only one door. To enter the sheepfold one must enter and leave through the door, and in this illustration the door is Jesus.

The Shepherd provides salvation for the sheep. Jesus warned that those who climb over the wall are robbers. They have no concern for the welfare of the sheep, only desiring to add to their own flock or to slaughter them for food. There are many who pose as shepherds, but there is only one Good Shepherd.

As ministers of the gospel, we must realize that we do not own the sheep. The sheep are Jesus’, and for us to have legitimate access to the sheep, we must come through the door. Jesus is the door.

The door must be entered before we have access to the kingdom of God and to God’s prepared place for His saints.

Neither is there salvation in any other: for there is none other name under heaven given among men, whereby we must be saved (Acts 4:12). Jesus has opened the door wide to those who are not ashamed to be baptized in His name and to receive His Spirit. Salvation can only be received by coming through the Door.

Peter was given the keys to the kingdom, which he used on the Day of Pentecost. This special day was the beginning of the harvest of souls that continues until now. Peter preached of Jesus as the way of salvation and unraveled the way to enter the door. Then Peter said unto them, Repent, and be baptized every one of you in the name of Jesus Christ for the remission of sins, and ye shall receive the gift of the Holy Ghost. For the promise is unto you, and to your children, and to all that are afar off, even as many as the Lord our God shall call (Acts 2:38-39).

Even though Peter made the way into the kingdom very plain, it is still hidden from people whom Satan has blinded their eyes from seeing the full truth. This blindness is apparent everywhere, which seems strange since we live in the age of knowledge. Most of this knowledge is limited to the secular fields rather than the spiritual.

WHAT CLOSES THE DOOR?

There are almost as many answers to the question of why individuals have allowed the door to be closed as there are people. We will touch briefly on some of the general categories. Unbelief covers a lot of ground, under which we could list many reasons why the truth has been given a bad name. Many would rather believe a lie that demands little or no sacrifice than to submit to a higher authority.

Submission is not one of the basic ideals taught in our world. There have been books written on submission, but for the most part, people want to feel independent though they submit to some force unknowingly. One of these forces is selfishness, which finally limits the person from seeing clearly the world around him. He is blinded to all but his own needs. This blindness propels him along the way to self-destruction and closes the door to truth.

Train up a child in the way he should go: and when he is old, he will not depart from it (Proverbs 22:6). Training is different than telling. Training is living before the children what you wish to instill in their hearts.

There are so many obstacles people have put in their way to finding the truth that a whole book could be written on the subject. Such things as pride, an unforgiving spirit, unthankfulness, and a mind filled with negative thoughts are a few of these reasons.

While the door is open, walk through and find salvation as three thousand did on the Day of Pentecost.

The above article “One Door Into The Kingdom” is written by Jack Tanner. This article was excerpted from chapter eighteen in Tanner’s book The King And His Kingdom.

1 thought on “One Door Into The Kingdom”