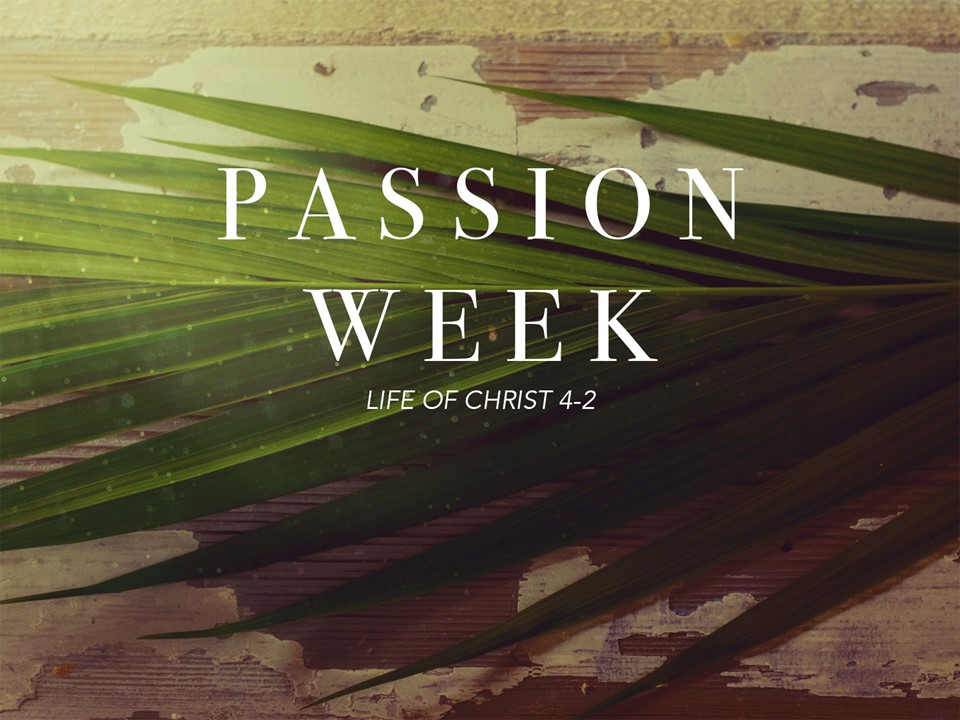 A. THE ACCOUNT OF PASSION WEEK IS VERY IMPORTANT:

Again, we may understand the importance given to this week by this fact: If the entire life of Jesus were as fully written as this week, it would require eighty volumes as large as the Bible to tell the story of His life.

B. IT IS DIFFICULT TO GIVE THE EVENTS IN CHRONOLOGICAL ORDER:

The writers of these Bible notes has given considerable study and thought to the order of events during Passion Week. He is offering the following as suggestive only. He is convinced that whatever order he would give here in this Bible study he would be challenged. It would be difficult to prove any definite chronological order of events for this week. However, the writer is fully convinced that Jesus was never crucified on Friday but on either Wednesday or Thursday. He has studied the argument that Jesus was crucified on Wednesday but he is more in sympathy with the belief that Jesus was crucified on Thursday.

In considering all the facts given it must always be remembered that in the Jewish calendar the day began at sunset and not at midnight. Keeping this point clearly in mind, let us look at and study the Scriptures that give us information on the subject.
1. “For as Jonas was three days and three nights in the whale’s belly; so shall the Son of Man be three days and three nights in the heart of the earth” (Matthew 12:40).
2. “And that he was buried, and that he rose again the third day according to the scriptures.” (I Corinthians 15:4).
3. “Then Jesus six days before the passover came to Bethany, where Lazarus was which had been dead” (John 12:1).
4. “On the next day much people that were come to the feast, when they heard that Jesus … ” (John 12:12).
5. “After two days was the feast of the passover” (Mark 14:1).
6. “And the first day of unleavened bread, when they killed the passover, his disciples said unto him, Where wilt thou that we go and prepare…” (Mark 14:12).
7. “And now when the even was come, because it was the preparation, that is, the day before the sabbath” (Mark 15:42).
8. “In the end of the sabbath, as it began to dawn toward the first day of the week…” (Matthew 28:1).

There are other Scriptures, which could be quoted here, but these are quite sufficient to give the information needed.

Before we attempt to give a chronological order of events for this week, let us consider some facts:
1. Jesus was in the tomb three days and three nights. However, it must be remembered that Jesus arose the third day after His death, neither the second nor fourth day after His death.
2. The Passover Lamb was to be killed and eaten on the fourteenth day of the first month (Nisan) at evening. Thus the Passover was always observed on the fourteenth day of Nisan.
3. The Feast of Unleavened Bread began on the fifteenth day of the first month, the first and last days of, which were named Holy Convocations or Sabbaths.
4. Jesus was crucified and buried on a day before a Sabbath which was not necessarily the seventh day of the week but rather the Holy Convocation or the first day of the Feast of Unleavened Bread.

Now keeping all these Scriptures and facts in mind, let us attempt to give an order of events for

Passion Week:
Friday – Jesus arrived at Bethany.
Friday evening – Supper took place in the home of Simon.
– Mary anointed his feet.
Saturday – The Triumphant Entry.
Monday – Jesus cursed the fig tree.
– Jesus cleansed the temple.
Tuesday – The fig tree withered away.
– The mites given by the widow.
– The Greeks sought Jesus.
– The discourse concerning the destruction of
Jerusalem.
– The conspiracy between the chief Priests and Judas.
Wednesday – The Last Supper.
– The Farewell discourses.
– Gethsemane.
Thursday – The arrest and trial of Jesus.
– The crucifixion and burial of Jesus.
Sunday Morning – The Resurrection.

The incident of the widow giving two mites took place after Jesus had delivered a withering denunciation against the Scribes and Pharisees. Jesus left the Outer Court and came into the court called the treasury along side of, which were thirteen chests where the Jews deposited their freewill offerings.

Jesus noticed the arrogant and self-important air in which the wealthy approached the chests. They would attract attention to their giving and drop in a piece of silver so that it would make a noise when it fell. Then He noticed a woman, dressed in the garb of widowhood and having every appearance of poverty, approach one of the chests and deposit here voluntary offering of two mites. It took two mites to make a farthing.

Jesus drew the attention of His disciples to the woman’s offering. “This poor widow hath cast in more, than all they which have cast into the treasury.” The lesson Jesus taught here is that the amount of what we really contribute is not measured by what we give, but rather by what we keep back for our own use.

D. THE APPEAL OF THE GREEK PROSELYTES:
Scriptural Reference: John 12:20-50.

At the birth of Jesus there were the Gentile wise men from the east that came seeking Him. Now near the end of His life there were again Gentiles who sought Him. These were Greek proselytes, not Grecians (Jews). These Greeks apparently were from Galilee and knew Philip. They sought an interview with Jesus. It would seem that this created Philip a problem of racial prejudice for he consulted Andrew before approaching our Lord. These Greeks had repudiated their heathen gods and had accepted the Jehovah of the Jews. However, they had no conception of how an incarnate God could redeem the world through His death. Jesus granted them an interview and gave them an explanation of how His sufferings and death should save the world.

These Greeks were forerunners of the multitudes of Gentiles, which would make up the church. Jesus knew that His death upon the cross was the only power that would remove racial barrier. Although His soul was agitated by a great conflict of emotions, He proceeds to explain to these Greeks that a corn of wheat must fall into the ground and die before it can bring forth. At this moment of emotional conflict Jesus cried out to be saved from this hour of death but He immediately recovers and a voice from heaven bears witness for the third time during His life and ministry.

In the following incidents we have some questions asked by the Jewish rulers. In every case Jesus demonstrated the Word of Wisdom as He replied to these questions.

1. IS IT LAWFUL TO PAY TRIBUTE TO CAESAR?

This question was asked by the Pharisees and Herodians and was planned to trick Jesus and to ensnare Him. They could imagine only two replies. If He said it was unlawful they would be able to accuse Him before the Roman government. If He said it was lawful He would lose favor of many of the Jews.

2. IN THE RESURRECTION WHOSE WIFE SHALL SHE BE?

In His reply He exposed the ignorance of the Sadducees in the Scriptures and at the same time corrected a low idea of the future life held by the Pharisees. “God is not the God of the dead, but of the living.” Jesus did not mean that they would be no recognition in Heaven but that we would be on a much higher plain than here in this world.

3. WHICH IS THE GREAT COMMANDMENT IN THE LAW?

This question was asked by the Pharisees to tempt Him. This was an attempt to entangle Jesus in the web of current theological, hair-splitting controversy. However, again Jesus refused to walk into the trap set for Him. He asserted the supremacy of love to the ONE God and declared His monotheistic belief by quoting from the Old Testament.

After this Jesus silenced His enemies by a counter-question about the lineage of the Messiah. They could not answer Him and did not dare ask Him any more questions (Matthew 22:46).

A. Review the number of chapters given to the account of Passion Week given by each of the Gospels.

B. Beginning at Friday give the order of events over that weekend and throughout the week following up to the Resurrection.

C. How did Jesus answer the following questions?:
1. Whose wife shall she be in the resurrection?
2. Is it lawful to pay tribute to Caesar?
3. Which is the great commandment in the law?