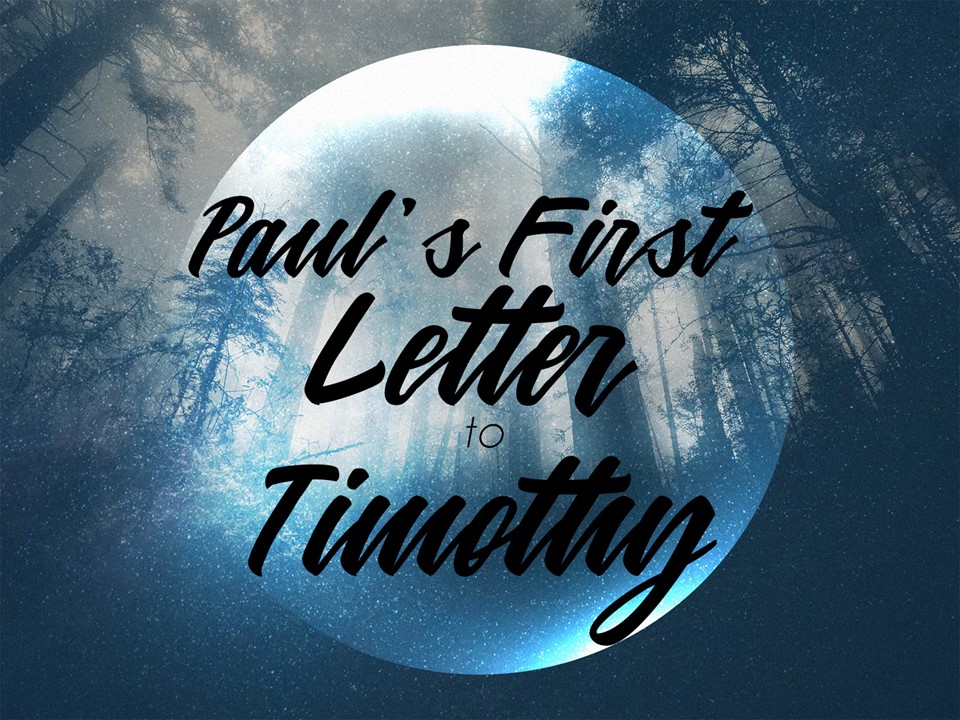 Timothy was born in Lystra (Acts 16:1-2) and was converted under Paul’s ministry during his first visit to Derbe and Lystra (Acts 14:6-22). Although his mother, Eunice, was a Jewess, his father was a Greek. Since there is no mention of his father, it is possible that he died when Timothy was very young. At any rate, his mother, Eunice, and his grandmother, Lois, who daily taught him the Holy Scriptures (II TIMOTHY 1:5 and 3:15) raised him.

It would seem that Timothy did not enjoy the best of health (I Timothy 5:23) but he was always an example in his spiritual life. He certainly had a special place in the affections of the Apostle Paul.

When Paul returned to Lystra on his second missionary journey, he found his young convert, Timothy, who was already well known at Lystra and Iconium for his zeal and faith. Paul was impressed with Timothy and decided to take him in is party, probably to replace John Mark. Paul joined the elders in laying hands on him and ordaining him to the ministry (II Timothy 1:6, 4:5). However, before ordaining Timothy, the Apostle Paul circumcised him. Paul was opposed to having the Gentiles circumcised as being necessary for salvation and refused to permit the circumcision of Titus. However, Timothy was part Jew and would be preaching to Jews. To remove any prejudice, Paul “took and circumcised” Timothy (Acts 16:3).

Timothy accompanied Paul into Macedonia and had an active ministry at Berea, Athens, Corinth and Ephesus. When Paul’s end drew near, it was Timothy that he yearned to have with him and for whom he especially sent (II Timothy 4:9, 13).

Tradition states that after Paul’s death, Timothy ministered in the Ephesian church. This would make him a co-worker with the Apostle John. Timothy was martyred under Nerva or Domitian.

B. PAUL’S FIRST LETTER TO TIMOTHY:

First Timothy along with II Timothy and Titus make up what is called the “Pastoral Epistles.” They are known by this name because they are addressed to young ministers.

This letter was written by Paul after his first imprisonment and during a period of travel in Macedonia while Timothy was still at Ephesus (I Timothy 1:3). We cannot be certain of the date, but it could be in the spring of 63 AD.

Paul’s purpose was to help Timothy in carrying out some difficult assignments. Timothy was to check the evil influence by certain false teachers. The welfare of the church necessitated that these teachers be refuted. Timothy is also given some definite instruction concerning his work in the church.

C. SALUTATION:
Scriptural Reference:
“Paul, an apostle of Jesus Christ by the commandment of God our Saviour, and Lord Jesus Christ, which is our hope; Unto Timothy, my own son in the faith: Grace, mercy, and peace, from God our Father and Jesus Christ our Lord” (I Timothy 1:1-2).

In the salutation the Apostle Paul identifies himself as the writer and declares his apostolic authority. He is an apostle by the commandment of God.

Tenderness and love are expressed as Paul addresses Timothy as “my own son.” Timothy was saved under Paul’s ministry, but Paul loved him as he would his own son.

The expression “God our Saviour” is found only in the Pastoral Epistles. It is a positive proof of the deity of Jesus. Jesus, our Savior, is God!

Paul exhorted Timothy to charge the church to teach only sound doctrine. Timothy was told to leave off subjects that only cause questions. Heretical teaching and attention to myths and genealogies produced speculations and controversies instead of godly living. Paul had given Timothy his instruction, now he tells him to “do it.” Apparently Paul felt that he should prod Timothy.

Sound doctrine will lead to love, a pure heart, a good conscience, and true faith. There were false teachers who were ambitious and desired to be teachers of the Law. These men were ignorant of what they were teaching, which led only to vain arguments and foolish talk. They did not understand the purpose of the Law.

Paul declares that the Law is not for the righteous man but for the lawless and disobedient. He makes a list of men for whom the Law was made: Men who are rebellious and lawless, men who are irreverent and profane, those who attack and kill their parents, murderers, homosexuals, kidnappers, liars, perjurers and everyone who oppose wholesome teaching.

Paul confessed that before his conversion, he had been a blasphemer and a persecutor. However, he found mercy because he did it in ignorance and unbelief. This statement of the Apostle Paul should always be considered with the teaching of the unpardonable sin (Matthew 12:31-32).

It was Paul’s ignorance, which permitted him to find forgiveness. It certainly is a different matter for a man to blaspheme willfully.

The purpose of the Law is to bring under judgment the lawless and disobedient.

Paul gives one of the clearest statements regarding the incarnation to be found anywhere here. “Christ Jesus came into the world to save sinners.”

Jesus ministered to the sick and suffering, but the main reason for being born in Bethlehem’s manger was to save sinners. Every gospel preacher should always keep this statement uppermost in his mind.

Paul confessed that he was the greatest of sinners before he was saved.

G. ONLY ONE ETERNAL GOD:
Scriptural Reference:
“Now unto the King eternal, immortal, invisible, the only wise God, be honour and glory for ever and ever. Amen” (I Timothy 1:17).

When Paul bursts out in a note of praise because of the fact that he, the chiefest of sinners, had been saved, he declares that He is the only God. The only God whom Paul worshipped is eternal, immortal, invisible and full of wisdom.

Paul charges his son in the gospel to put up a good fight. He told Timothy to hold the faith and a good conscience.

The names of the two men who had made shipwreck of their faith is mentioned: Hymenaeus and Alexander. These men were blasphemers who opposed sound doctrine. They are mentioned again in Paul’s second letter to Timothy (II Timothy 4:14, 2:17). These men were delivered to Satan not for damnation, but for discipline (I Corinthians 5:5). This type of discipline simply means that they are no longer within the security and protection of the church. As such they are exposed to the attacks of Satan until they are brought to a place of repentance.

The second chapter continues Paul’s exhortation, giving instructions for prayer and worship. He wrote that men should pray everywhere, lifting up holy hands without anger and unbelief. It is His will that all men should be saved. Therefore it is God’s will that prayers should be made for all men which will include both sinners and saints. The church is instructed to pray for our governments and those who are in authority. This included praying for Nero, the emperor of that time, who had set fire to Rome and persecuted the saints.

Not only did Paul instruct Timothy regarding those for whom Christians should pray, but also he defined the kind of prayers: supplications, prayers, intercessions and giving of thanks. He also described how men ought to pray. They should pray without anger, resentment or divisions among them, lifting up hands which are clean and holy.

We are given the foundation for all prayer and worship: One God and One Mediator, the man Christ Jesus. Jesus, in His humanity, has become our Mediator. Because of this, we know that God will hear and accept our prayer and thanksgiving.

We find in the latter half of the second chapter of this epistle, some very important teaching regarding the place of women in worship.

Timothy was given instruction regarding a godly woman’s appearance and manner of dress. Women who profess godliness do not need adornment. Their good works will be their adorning. They were to dress modestly and sensibly with appropriate apparel. They were not to dress with elaborate hair arrangement, with jewelry nor expensive clothing.

Not only were the outward appearances to be holy, but the spirit and attitude must be right. Women are to be in subjection to men. They do not have the authority to tell men what is right and wrong. They are to learn in quietness and submissiveness.

We shall quote from The Living New Testament: “Women should listen and learn quietly and humbly. I never let women teach men or lord it over them. Let them be silent in your church meetings” (I Timothy 2:11-12).

The thought here is not to rob women the right to worship or be used by God in soul winning. It means that they must know their proper place and never usurp authority over men. Women are the weaker vessel. Eve was deceived in the original transgression; Adam was not. Part of the curse of womanhood was sorrow in childbearing, but there is a promise to those who are faithful that there will be no danger in childbearing.

In verse 15, there is a second meaning, which should be considered. To get this thought we shall quote from The Amplified Bible: “Nevertheless the sentence upon women of pain in motherhood does not hinder their souls’ salvation, and they shall be saved if they continue in faith and love and holiness, with self-control; through the childbearing, that is by the birth of the divine child” (I Timothy 2:15).

Woman shall be saved by the birth of Jesus providing they continue in holiness. There is no place for unconditional eternal security here!

LESSON ONE
SELF HELP TEST

A. Write out a brief history of the life of Timothy.
B. Write the Scripture in full which clearly states the purpose of Jesus being born into this world.
C. Explain clearly the meaning of I Timothy 2:15.
D. How did Paul find mercy even though he had been a blasphemer?
E. How were Hymenaeus and Alexander disciplined?
F. Explain the purpose of the Law.