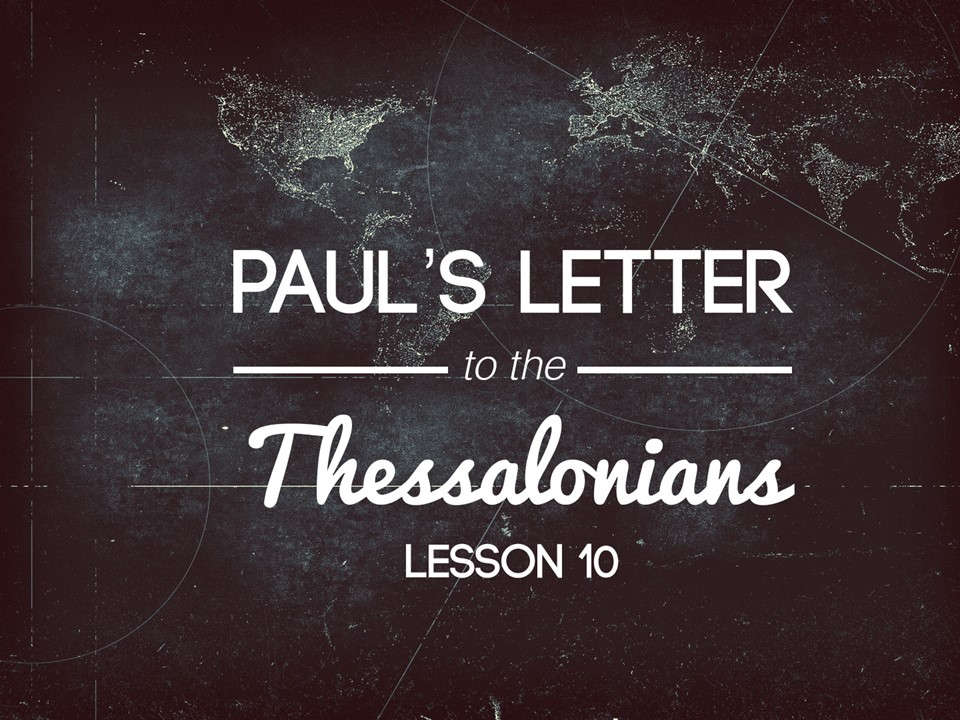 A. THESSALONICA:
Thessalonica was a strategic commercial city in Macedonia. It was located on a harbor surrounded by rich plains. It was in sight of Mount Olympus and was a leading city of that time. Many Jews, Greeks and Romans lived there. The modern name for this city is Salonika.

B. PAUL’S FIRST LETTER TO THE THESSALONIANS:
This was the first epistle Paul wrote. It was written from Corinth around 50 or 51 AD. The second letter to the Thessalonians was written a few months later also from Corinth. Paul preached three Sabbath days in Thessalonica and was accused of turning the world upside down. A riot resulted and Paul went to Berea. When Paul left Berea for Athens. Timothy and Silas remained behind. From Athens, Paul sent for them and when the arrived, he sent Timothy back to see how the church in Thessalonica was. Timothy brought back a good report, but also brought questions concerning the Lord’s coming. There are five chapters in this epistle. Each one ends with a message concerning the Lord’s return.

C. SALUTATION:
In the salutation, Paul included the names of Silvanus and Timotheus. These were Roman forms of the names Silas and Timothy.

D. WITHGREATCONVICTION:
Scriptural Reference:
“For our gospel came not unto you in word only, but also in power, and in the Holy Ghost, and in much assurance; so ye know what manner of man we were among you for your sake” (I Thessalonians 1 :5).

Paul called the message he preached “Our Gospel.” It revealed his personal commitment to the Gospel and that it was part of him. This was emphasized in his reference to his personal life and he lived before them. The result was a message of power and great faith. Under the ministry of Paul, the Gospel brought great conviction. Let us quote from Weymouth’s translation: “Our gospel did not come to you in words only, but also with power and with the Holy Spirit and with great conviction.”

E. WHO WERE SAVED AT THESSALONICA:
In the account of the revival of Thessalonica as given in the 17th chapter of Acts, there were Jews, devote Greek and Gentile proselytes among the first converts. In I Thessalonians 1:9, we also read where there were Gentiles saved from idolatry. In these Scriptures, it is stated that there were three groups of people among the converts: a) Jews; b) Gentile Proselytes; and 3) Gentiles saved from idolatry.

F. PAUL’S PURE MOTIVES: (I Thessalonians 2:1-8).
As it frequently happens, the enemies of the Gospel attacked it by attacking God’s messenger. They accused him of several wrongs and tried to assassinate his character. They accused him of moral impurity, deception, of being a man-pleaser and a religious racketeer.

In order to protect the Gospel, it was necessary for Paul to defend and vindicate himself. He reminded the Thessalonians of his ministry among them; his motes for preaching the Gospel were pure. He had been sincere, truthful and unselfish. He denied the accusation of deceit and uncleanness. He never preached with flattering words to please men. In fact, he was willing to give them not only the Gospel, but also his own soul.

G. PAUL’S EXAMPLE: (I Thessalonians 2:9-12).
Paul reminded the Thessalonians of his example. He labored night and day that he might not be chargeable to anyone of them. Three words are used to describe his life: holy, just, and unblameable. These words refer to religious purity and moral integrity. He likes himself to a father and summarizes his ministry by the use of these three verbs – “exhorted,” “comforted” and “charged.”

H. PAUL’S REASON FOR REJOICING: (I Thessalonians 2:13-20).
Paul rejoiced that the Thessalonians received the Gospel as being God’s message not as the word of men. As a result, they suffered persecution, as did the churches in Judaea. The phrase “to fill out their sins always” refers to the Jews adding sin to sin, making up their full measure of guilt.

Paul expressed his desire to visit Thessalonica, but Satan hindered him. We do not know how he had been hindered. It may have been by ill health or by the persecution at Athens and Corinth.

I. PAUL’S CONCERN: (I Thessalonians 3:1-11).
Paul’s concern for the church at Thessalonica was revealed by his statement, “when we could no longer forbear” (I Thessalonians 3:1). He repeated this in verse five. His concern was so great that he sent Timothy to strengthen and encourage them. He reminded them that he had told them that they would suffer tribulation. Paul was concerned lest their faith would weaken and they would yield to temptation.

Paul rejoiced when Timothy returned with a good report of their steadfastness and devotion. This comforted Paul in his affliction and distress.

J. PAUL’S PRAYER FOR THE THESSALONIANS:
Scriptural Reference:
“And the Lord make you to increase and abound in love one toward another, and toward all men, even as we do toward you: to the end he may establish your hearts unblameable in holiness before God, even our Father, at the coming of our Lord Jesus with all his saints” (I Thessalonians 3:12-13).

Paul prayed day and night for the Thessalonians. There were three main petitions made for them:
1. That God would unable Paul to visit them to protect their faith;
2. That they might abound in love;
3. That the lord might establish their hearts in holiness.

The final petition is linked with the hope of the Lord’s return.

A. State the Scriptures that show that the following were among the converts at Thessalonica:
1. Jews:
2. Gentile Proselytes:
3. Gentiles saved from idolatry:

C. Who were Silvanius and Timotheus?

D. How long did Paul preach in Thessalonica?

E. In what ways did Paul show his concern for the church in Thessalonica?

F. With what message does each chapter in the epistle close?