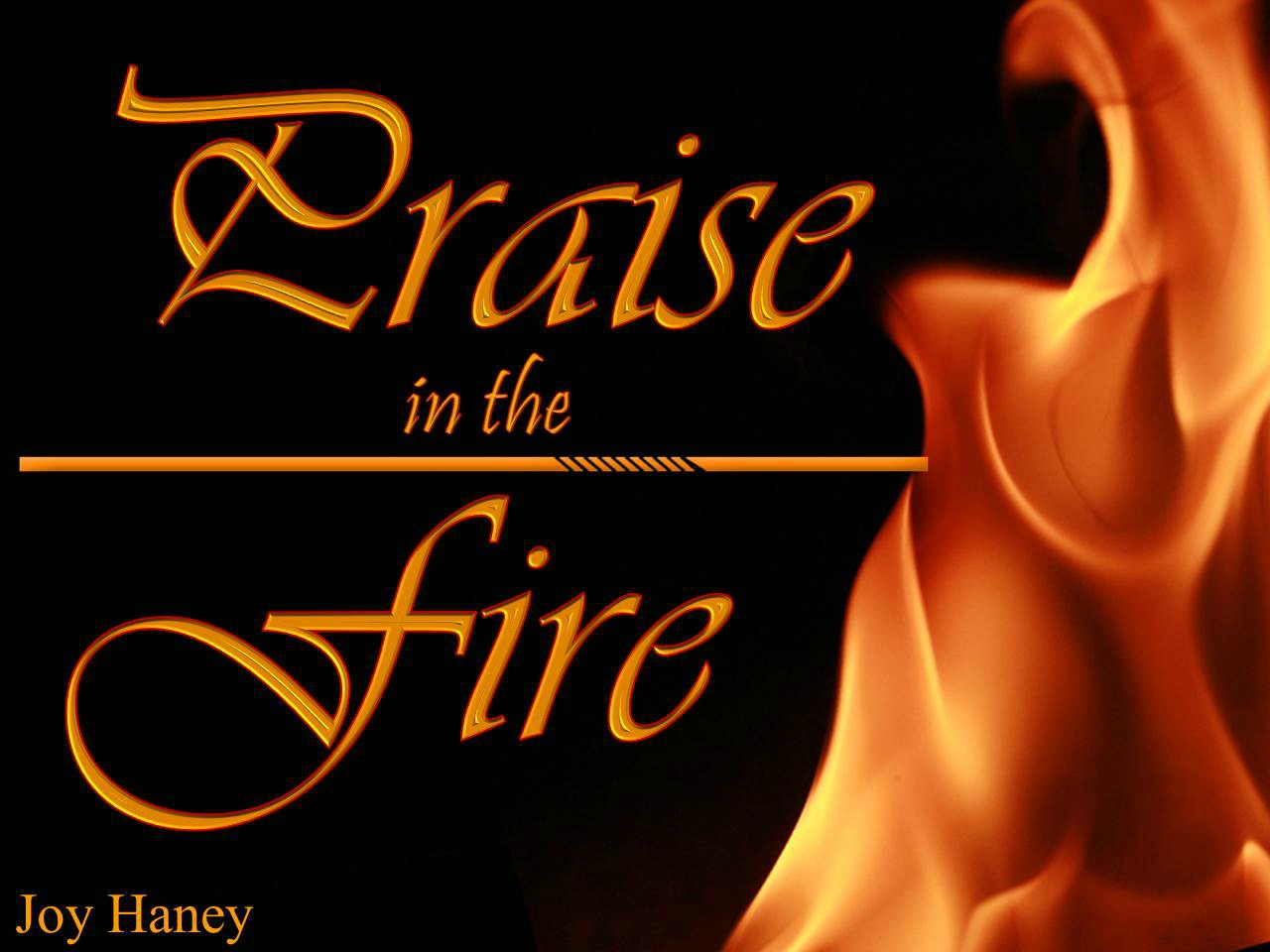 When the enemy’s fire comes to you, just turn around and burn him by burning sweet incense to God. Job burnt Satan by worshipping. When he lost everything and it looked like he was consumed by the enemy’s fire, he sinned not with his lips. “Then Job arose, and rent his mantle, and shaved his head, and fell down upon the ground; AND WORSHIPPED” (Job 1:20).

Fire was a part of the Old Testament rituals and offering of sacrifice. Moses was commanded by God to burn sweet incense unto God. “And he burnt sweet incense thereon; as the Lord commanded Moses” (Exod. 40:27).

Hebrews 13:10 says, “We have an altar.” Jesus became our sacrifice. “By him, therefore let us offer the sacrifice of praise to God, continually, that is, the fruit of our lips giving thanks to his name” (Heb. 13:15-16).

Praise Him not only in your mind, but also aloud. Over and over the Psalms instruct us to lift up our voice in praise. The act of praise eliminates Satan’s lies and destroying power. Praise has a positive affect on the body, mind, and spirit. There is something uplifting to praising verbally with our lips as instructed to do in Hebrews.

I will bless the Lord at all times: his praise shall continually be in my mouth (Ps. 34:1).

And he hath put a new song in my mouth, even praise unto our God; many shall see it, and fear, and shall trust in the Lord (Ps. 40:3).

Sing aloud unto God our strength: make a joyful noise unto the God of Jacob (Ps. 81:1).

Then was our mouth filled with laughter, and our tongue with singing: then said they among the heathen, The Lord hath done great things for them (Ps. 126:2).

Jesus, who knew the power of the spoken word, said in Mark 11:23, “For verily I say unto you, That whosoever shall say unto this mountain, Be thou removed, and be thou cast into the sea; and shall not doubt in his heart, but shall believe that those things which he saith shall come to pass; he shall have whatsoever he saith.” The spoken word is powerful.

Science tells us that words which are spoken never die, but are continually in the atmosphere. It has been reported that scientists are working on a machine that will recapture voices from the past. Who knows what they will be able to do? Many years ago no one believed a man could walk on the moon.

If our words are forever floating around in the atmosphere, why not let them be words of praise, power, and faith? You can create a lifestyle of giving praise. Just as grumbling becomes a habit, so can praise become a habit. Anything as powerful as praise needs to be developed into our lives as an integral part. Praise works! A friend of mine, Elizabeth Cripps, and I were working on mail-outs when she shared a vision with me that she had one night several years ago. As she was telling it her voice throbbed with emotion and tears ran down her cheeks as she recalled so vividly the details as if it were yesterday. In her darkness Christ gave her beauty for ashes. These were her words:

During a particularly difficult time in our lives, my husband and I were on a fast. He was up into the wee hours of the morning praying for me that I might be encouraged. About 3:00 a.m. I was awakened with this vision:

I was looking down from the sky upon a dark and dismal road that a lady was fearfully walking down. The lady was me, and life was dark, uncertain, and very threatening. I could not see anything surrounding me, only the path winding downward before me. All of a sudden the thought came to me that I had nothing to lose and I threw my hands in the air and began to praise and worship God. Then from across the sky I saw a very angry animal-like face appear, and in its fury it sent bolts of lightning to destroy me. Just as the bolts were about to strike me, a large hand, which I knew to be God’s, came in front of me with a shield so shiny that when the lightening struck it, the whole sky lit up and there was such beauty around me and rainbow-like colors appeared in the sky. Then I knew the beauty was there all along, it was only the darkness that hid it from my view. What the enemy had intended for evil, the Lord intended for my good.

When the angel appeared unto Abram in a vision he said, “Fear not, Abram, I AM THY SHIELD, and thy exceeding great reward” (Gen. 15:1). Just as God became Abram’s shield, He also became Elizabeth Cripp’s shield. He is also your shield, but notice what brought the shield around her. It was praise and worship to God.

I heard a tape that had been recorded three or four generations ago. It was the story of seven people who had gone into a little church and begun to praise and worship God, singing the song “Hallelujah.” There was an old man who recorded this. When he played it back, to their great surprise, there were many voices on the tape. They were not human voices, but the voices of angels.

When a scientist listened to the phenomenon he said that in the scientific world they are aware that at all times there are voices in the atmosphere continually giving praise to God. The voices I listened to were singing high praises majestically and never taking a breath as humans need to do. It was a breathtaking experience listening to the throb of worship unto the King of kings.

Praise is where the victory is. When Paul and Silas were beaten and thrown into prison they prayed and sang praises at midnight, and God caused an earthquake to come and the prison doors opened and they were set free. (See Acts 16:25.) The praise at midnight opened the doors and the bands fell off.

You will pass through your midnights. There will be pain, fiery trials, and disappointments, but praise will cause the constricting bands of fear and disillusionment to fall off you. Prayer and praise opens doors of prisons quicker than anything else. It is God’s way to bring you victory.

Men and women of the Bible who went through great trials intrigue me. There is one characteristic they all have in common: praying, praising, worshipping, or thanking God in the time of their greatest trouble or trial. Some of them were:

Daniel — When he knew he was going to be thrown in the lion’s den, he prayed and thanked his God as he had been doing every day for many years (see Dan. 2:23).

Abraham — On the day of his greatest sacrifice, with a bleeding heart, when he and his son were going to obey the Lord and someone asked him where he was going, he replied, “I and the lad will go and worship” (see Gen. 22:5).

Anna — A widow who could have developed into a recluse in bitterness and loneliness gave herself to daily prayers and fastings unto the Lord (see Luke 2:37).

Hannah — The day of her greatest sacrifice; leaving her young son at the temple of the Lord, she prayed and said, “My heart rejoiceth in the Lord.” She continued to worship the great God that had given her a child in her barrenness (see 1 Samuel. 2:1).

Paul — Shortly before his martyrdom he wrote many things that give insight to his inner thinking. Instead of being bitter and blaming God for his days of imprisonment, he wrote encouraging letters that show his attitude and prayer life. He wrote: “I thank God, whom I serve from my forefathers with pure conscience, that without ceasing I have remembrance of thee in my prayers day and night” (2 Tim. 1:3). “For God hath not given us the spirit of fear; but of power, and of love, and of a sound mind” (2 Tim. 1:7).

Everyone, sooner or later, will experience heartaches, hurts, and disappointments. Joseph was lied about, rejected, and mocked, yet he kept his integrity with God and continued to pray daily until God brought him out victorious. Your attitude during the time of being burnt determines your destiny. Joseph was burnt to the fullest degree, but it did not make him bitter. Whatever you encounter in life, learn to pray and praise like those before us and be victorious as they were.

Life has not always been roses for myself and my family. We have shared many heartaches as well as the joys of life. There are times when we reflect back over our lives, and it seems the times when we had the most victory during our trials was when we prayed and praised.

When mother passed away I was a young thirty-two-year old. I remember our family with my brothers and sisters standing in the hallway of our home waiting for the funeral car to come and take us to the memorial service at the church. We were standing there singing a praise song to our God. It was the same song that had been recorded on the tape with the seven worshippers in the little country church. We sang simply “Hallelujah, Hallelujah!” Even now I can still see the scene as we stood there with tears running down our cheeks. It seemed that a special presence of the Lord filled the room and carried us through the whole funeral with such peace.

Over and over we have practiced this during the times when our hearts have been broken by circumstances and hurtful relationships. It seems that God has always helped us through the most difficult times when we would praise Him instead of hardening our hearts and complaining about what a raw deal was handed to us. There were times when we did complain, and struggled against bitterness becoming lodged in our hearts. Then we would fall at His feet and He would give us grace to go on and help us to be able to praise Him even when we did not want to at first. Oh, but the joy that comes by doing it His way!

It is not easy to do this when you are bleeding and you want to get even, but it is God’s way and it works. He said, “In every thing give thanks; for this is the will of God in Christ Jesus concerning you” (1 Thess. 5:18).

Quote this chapter before you begin your day and then practice it in the good times as well as the bad times.

Rudyard Kipling, who gained renown throughout the world as a poet and storyteller, made this statement: “We have forty million reasons for failure, but not a single excuse.”

You can give all the reasons why you cannot praise during your difficult times, but there is nothing that can stop you if you desire to do it.

You will never be the person you can be if pressure, trials, and struggles are taken out of your life, so determine to praise God for the better person He is allowing you to become.

This article “Praise in the Fire” was taken from How to Forgive When it’s Hard to Forget by Joy Haney and may be used for study & research purposes only.

1 thought on “Praise in the Fire (Entire Article)”