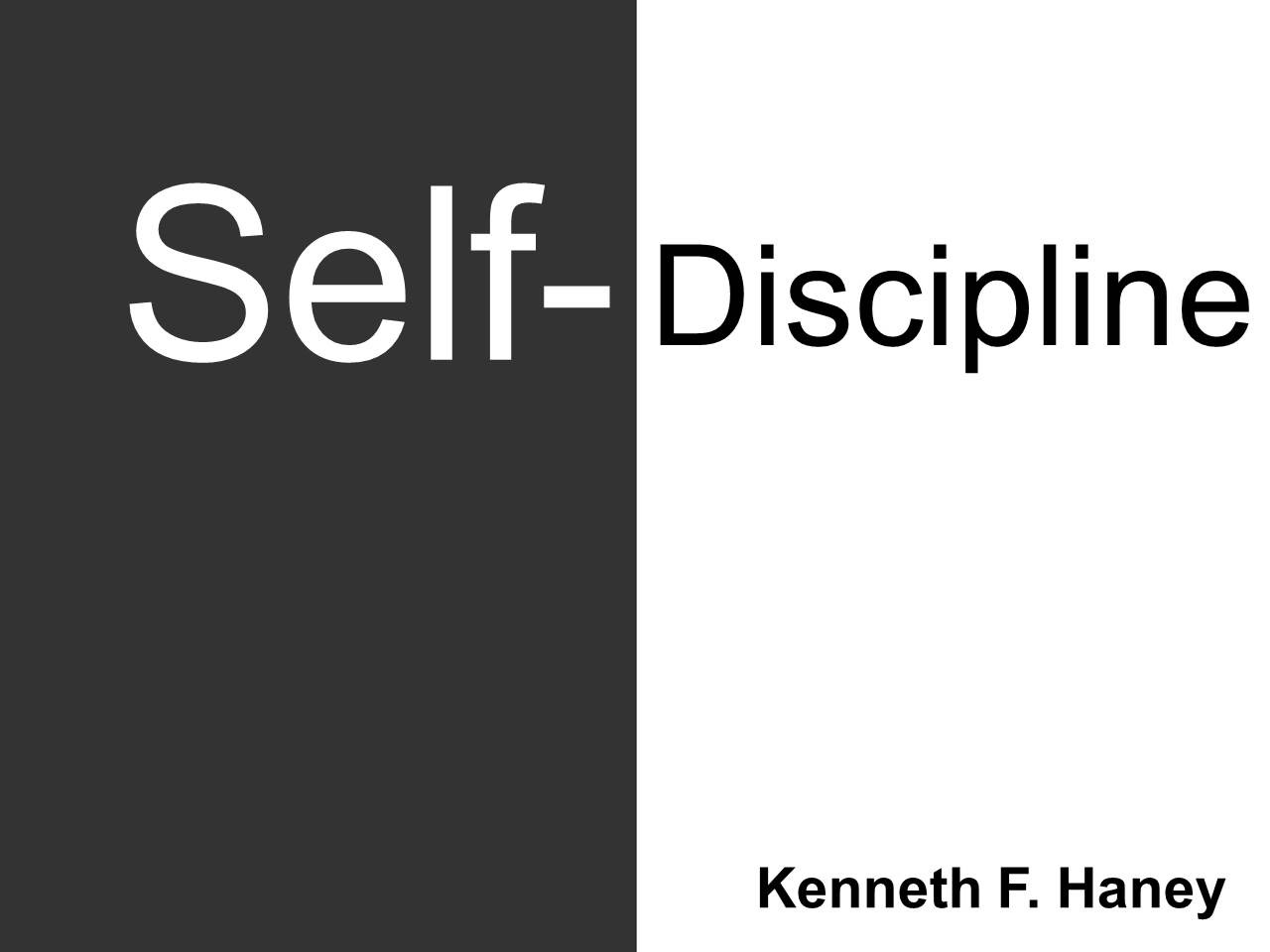 The work of God must become the most important thing in our life. There was once a young communist lad standing on a street corner handing out communist propaganda. His clothes were tattered and torn, and a man passing by said to him, “You’re paying a great price to spread your doctrine.”

The young lad answered, “No price is too great when you’re changing the world.”

For the early church, the work of God became the most important thing in their life. They were racing with time and could not afford to be distracted from their purpose.

Paul states in I Corinthians 9:27: “But I keep under my body, and bring it into subjection: lest that by any means, when I have preached to others, I myself should be a castaway.” Scofield commentary: “buffet my body, and lead it captive.”

The greatest test of a man’s character is how he takes charge of his own life.

“If any man will come after me, let him deny himself, and take up his cross, and follow me” (Matthew 16:24). DENY HIMSELF!

A soldier of the cross is much like a soldier in the army. Anyone who serves their country in the military will find that there are two things required: Submission to authority and self-discipline.

Jack R. Taylor explains what staying dead to self means: “There is no other way to overcome the self-life than through the work of the Holy Spirit constantly applying the meaning of the cross. Without the constant work of the Holy Spirit filling our lives with Himself, we are forever ‘stirring in the coffin.’ Our constant consent to His constant application of the deeper meaning of the cross keeps us in the position of death, that we might constantly know the power of His Life.”

Discipline of the Mind

How we think determines our performance. If you think you can, you will. Performance, good or bad, will be determined by attitude. Those who have received the power of the Holy Spirit have Jesus Christ dwelling inside; thus everything Jesus represents: salvation, power to witness, casting out demons, overcoming sin, pulling down strongholds of Satan, etc., they can do through Him. Paul said it in Philippians 4:13: “I can do all things through Christ which strengtheneth me.”

Vision, looking beyond the common place, finds new things to do. And growth, as it always must, follows where mind marks the way.

The mind can never be chained. It is up to the individual to order its thoughts. John Bunyan was shut up in a Bedford jail that he might not preach the gospel. His tireless soul refused to be enchained. He wrote what was for centuries the most popular book written in the English language, Pilgrim’s Progress.

Paul himself, when a prisoner at Rome was chafing because he could not go and preach to the churches, wrote letters which have been preached to all generations since.

Your disposition will be suitable to that which you most frequently think on; for the soul is, as it were, tinged with the color and complexion of its own thoughts.

The journey between the vision and the fulfillment of the vision are two different things. When Jesus talked to His disciples about His kingdom, they could not see Gethsemane and Calvary. When Jesus said, “Follow me,” they did not see the suffering that would be theirs.

When Moses instructed the children of Israel about leaving Egypt, all they could see was the deliverance. They could not see the Red Sea they would face.

Joseph had a vision of his brothers bowing down before him while he was in a leadership position. He did not see the pit, the foreign land, the lies, and the prison.

Each of the disciples and the apostles did not realize when they put their name on the dotted line to follow Christ that their life would end in martyrdom or that they would suffer great persecution. They were called to seal their doctrines with their blood, as the following facts will attest:

Matthew suffered martyrdom by being slain with a sword at a distant city of Ethiopia.

Mark expired at Alexandria, after being cruelly dragged through the streets of that city.

Luke was hanged upon an olive tree in the classic land of Greece.

John was put in a caldron of boiling oil, but escaped death in a miraculous manner, and was afterward banished to Patmos.

Peter was crucified at Rome with his head downward.

James, the Greater, was beheaded at Jerusalem.

James, the Less, was thrown from a lofty pinnacle of the temple, and then beaten to death with a fuller’s club.

Andrew was bound to a cross, whence he preached to his persecutors, until he died.

Thomas was run through the body with a lance at Coromandel in the East Indies.

Jude was shot to death with arrows.

Matthias was first stoned and then beheaded.

Barnabas of the Gentiles was stoned to death at Salonica.

Paul, after various tortures and persecutions, was at length beheaded at Rome by the Emperor Nero.

As these great men gave their lives for the gospel of Jesus Christ; may the church do the same in word and in deed as the following poem describes:

Christ Has No Hands

He has no help but our help to bring them to His side.

We are the only Bible the careless world will read.

We are the sinner’s gospel; we are the scoffer’s creed;

We are the Lord’s last message, given in word and deed;

What if our hands are busy with other work than His?

What if our feet are walking where sin’s allurement is?

What if our tongue is speaking of things His lips would spurn?

How can we hope to help Him or welcome His return?

“And I looked, and rose up, and said unto the nobles, and to the rulers, and to the rest of the people, Be not ye afraid of them: remember the Lord, which is great and terrible, and fight for your brethren, your sons, and your daughters, your wives, and your houses.” Nehemiah 4:14

This article “Self-Discipline” written by Kenneth F. Haney, was excerpted from the book One Vision. It may be used for study and research purposes only.