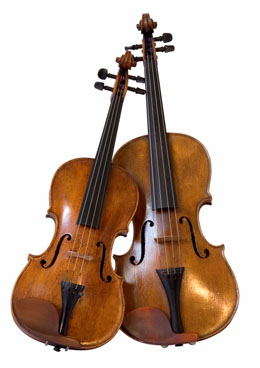 A holy hush fell on the 18,000 plus gathered in the Chesapeake Energy Arena for the 2015 North American Youth Congress as Tiffany Wilkins skillfully pulled music out of the small wooden instrument tucked under her chin. The evocative melody of Alpha and Omega slowly but surely called the congregation to worship. And they responded. All across the arena they stood with raised hands, often with tears streaming unbidden down their cheeks. For an instrument more at home in a symphony hall than a Pentecostal church service, Tiffany’s violin made an impact.

My father-in-law, on the other hand, plays a fiddle. He took it up relatively late in life. Although he was not a novice musician—he has a long background in southern gospel/bluegrass, especially with a guitar—he had to work through those painful-sounding hours before anything resembling music came out of his fiddle. It was not without cause that my mother-in-law insisted that he practice in the garage. He eventually gained enough mastery to play his fiddle in a southern gospel/bluegrass band. While the instrument he plays is structurally identical to Tiffany’s violin, it is definitely a fiddle. What makes the difference is the kind of music played on the instrument. The fiddle has a long history in Irish and Scottish folk music. In North America it is best known for bluegrass and Cajun music. The violin may stir your heart; the fiddle might set your toes tapping.

The fiddle/violin is the best-known musical instrument named not for structural differences but rather because of musical styles. It is not the “what” of instrument design but the “whom” and “how” of the musician that determines  which of the names this particular instrument will be called.

But upon closer examination the metaphor might be tied up too neatly. . Life is not always so cut and dried. Often we occupy the space between a fiddle and a violin. When I was researching the difference between fiddles and violins—which as stated above is the genre of the music and not the makeup of the instrument—I found some music crosses genres. It shares characteristics of both and the difference between the genres is harder to quantify, hence the name of the instrument is harder to discern. It’s somewhere between a fiddle and a violin.

As Christians we face a similar challenge. On one hand we can point to the moment in time when we were saved, but on the other hand we are still in the process of being saved and we know our ultimate salvation will not come until the end of the age. Although Jesus has purchased our salvation and we have responded to His gracious offer of salvation, we still need the ongoing spiritual transformation. We are somewhere between a fiddle and a violin.

It is in the somewhere land that discipleship is so critical. Discipleship involves the daily disciplines which shape our heads and our hearts. Central to this process is the daily renewing of our commitments to put God first in our lives. It means consistently resisting the urge to take the bow from the Master’s hand and to play our own music.

In the modern Western world we often think of this discipleship as an individual affair—a “me and Jesus” proposition. And while individual commitments are important, discipleship is more effective when it functions on a group level. It is through our interactions with fellow believers and the teaching ministry of the church that real change takes place.

The second challenge to discipleship is the idea it is something which happens early in a Christian’s journey. Of course early discipleship development is critical. But so is ongoing discipleship. It takes a lifetime to be fully formed into His image. And even then we sometimes slip back into the land somewhere between a fiddle and a violin. But there is coming a day when the music will be pure, when the struggles of this life are behind us. You will have to decide whether that music is being played on a fiddle or a violin.

Robin Johnston is the editor in chief and publisher of the United Pentecostal Church International.