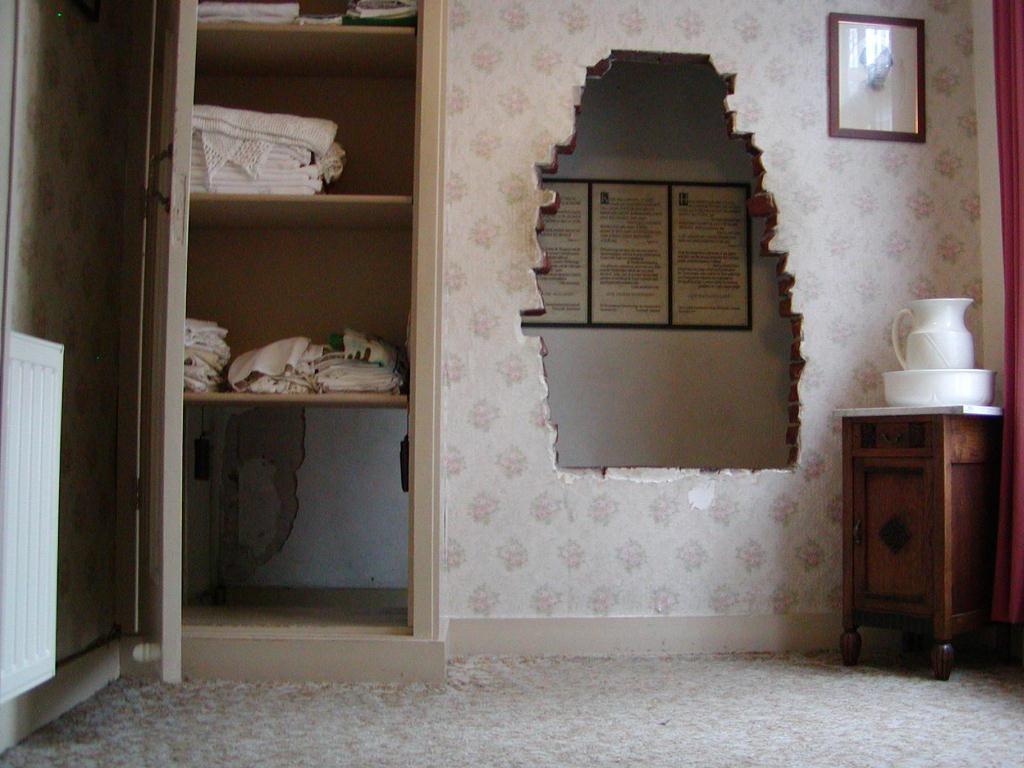 Thaliah’s son Ahaziah was king over Judah, but died just 1 year after he rose to the throne. Perhaps she felt cheated by his death; or possibly she had, all along, planned to usurp the throne. Whatever the reason, rather than wait for one of her grandchildren to come to age and reign in her son’s stead, Athaliah decided she wanted to sit on the throne instead.

And so, unimaginably, she begins to slaughter her grandchildren—killing anyone who could eventually challenge her position of authority.

Miraculously; one Ahaziah’s grandsons, Joash, was saved from the slaughter. Jehosheba, Athaliah’s own sister, takes the boy and hides him in a secret room in her bedchamber. Ahaziah takes the throne for herself and begins to rule, unaware that the rightful heir to the throne is waiting in this hiding place.

THE NEED FOR HIDING

Had Joash not been hidden away, he would have been killed. No doubt, despite having survived the initial massacre that took the life of his siblings, had he been discovered alive, Athaliah would have made sure the second attempt was successful and Joash’s place on the throne would have been destroyed.

You and I have an enemy every bit as bloodthirsty and power-hungry as Athaliah. He is actively seeking out those he can destroy. 1 Peter 5:8 says:

“Be sober, be vigilant; because your adversary the devil, as a roaring lion, walketh about, seeking whom he may devour:”

He is trying to sit on a throne that is not his. He is not the rightful heir. And he hates those who are. He hates every blood-bought, fire-baptized, Holy-Ghost-filled child of the King. And until his time is up, he’s going to do everything he can to keep himself on the throne.

He’s going to use every means at his disposal to destroy anyone who represents The King. He’ll use politics to divide us; lust to change our affections; money to divide our attention; entertainment to distract us; drugs to destroy us; alcohol and drugs to anesthetize us…whatever he can do to destroy the children of God, he’s going to do.

It’s our job as parents to have a place where we can hide our children away.

If you’re married and don’t have children, then you need a place where you and your spouse can hide away. A place where your personal walk with God and your relationship with one another can remain untouched by the enemy.

If you’re single, you need a place where you can hide you away. Untouched, unspotted by the darkness of this world. A place where a murderous tyrant can’t get his hands on you.

This is not to say we should stick our heads in the sand, isolate ourselves from everyone around us, and literally hide in our bedrooms until Jesus’ return. Hopefully it’s clear that I’m speaking of the spiritual implications for those who are not hidden away.

VENTURING INTO THE OPEN The problem with hiding places is that, by necessity, they don’t allow for much roaming.

A life hidden away means a life of some discomfort. A life of confines that restrict our freedoms. Or, perhaps better stated, the perception we may have of “freedoms” available to those “on the outside.”

Of course, the only ones roaming “free” are those who pose no threat to the wicked ruler who has taken, quite by evil means, the place of authority in this world. Those momentary “freedoms,” however, are the only reward his citizens will ever enjoy.

But we are kings in waiting. Rightful heirs to the throne.

We forget so very easily. We tire of confines. We become weary with restrictions. We grow restless. And so we begin to venture into the open. “Only a little,” we say, but I’ve seen many people venture outside in the most innocent of ways only to end up a victim of the enemy “I just don’t think [this particular thing that bothers me] is a salvation issue!’ And perhaps it isn’t. But rarely is someone content to simply wave their arm out from the hiding place. Small steps beg for larger ones.

The young man who was hidden away does eventually become king, renewing God’s covenant, and destroying the altars and priests of Baal in the process. Judah experiences some of its best years and greatest prosperity under his rule.

See, we know what the end looks like, but we still struggle with the years in between, somehow. We tire of questions from our children, and struggling to keep them “hidden” from the world. So we give in. We let them hang out with certain person. We let them wear the thing. We allow them to download the song. We let them go to the party.

As a homeschooling parent I’ve, apparently, been given the standard-issue “please question my parenting skills and judgment” t-shirt. Which means I hear things like, “You shouldn’t be sheltering your kids,” from the well-meaning, Dr. Phil-watching, advice-slinging class.

Really? I shouldn’t shelter my kids? I’m pretty sure that’s one of the primary, God-given responsibilities I’ve been assigned.

(They’ll say, “Oh, you know what I mean.” To which the only response is to assure them that they don’t know what they mean, so how should I? I refuse to be complicit in the slaughter of princes.)

They must not understand that I am not raising pawns and paupers. If I were the guardian of nothing more than the kingdom’s beggars, revelers, and troublemakers, I could cave in and let them wander freely about. But I’m raising up kings! I’m entrusted with the royal bloodline!

The tenacity and resolve of our enemy is most clearly seen in the evils of the Planned Parenthood videos which received so much attention just a couple months ago. Those videos are a literal representation of what Satan desires to do to our children spiritually—he wants to rip them from limb to limb.

Shelter them? Yes. I refuse to leave their future to chance.

In 1837 Willem ten Boom opened a clock shop. The ten Boom family were dedicated Christians, and the shop was an open house for anyone in need.

Willem attended an inspiring Dutch Reformed worship service in 1844, which prompted him to begin a weekly prayer service to pray for the Jewish people. His son, Casper, continued the tradition of prayer with his own family. The prayer meetings would continue for 100 years, until February 28, 1944 when Nazi soldiers arrested Casper and his family for harboring Jews.

Throughout World War II, the ten Booms exhibited their Christian faith by making their home a refuge—a hiding place—for Jews and members of the Dutch underground being hunted by Nazis. At its peak, there were as many as seven people living illegally in the ten Booms home. Corrie ten Boom became a ringleader within the Haarlem underground, leading the harbored “fugitives” to other safe houses. Corrie and the ten Boom family are thought to have saved an estimated 800 Jews and Dutch underground workers during this time.

On February 28, however, the ten Boom family was betrayed, and the Gestapo raided their home, taking over 20 family members into custody. Although they systematically searched the house, they could not find the two Jewish men, two Jewish women, and two members of the Dutch underground who were safely hidden behind a false wall in Corrie’s bedroom. Although the house remained under guard, the Resistance was able to liberate the refugees two days later.

When Casper ten Boom was asked if he knew he could die for helping Jews, he replied, “It would be an honor to give my life for God’s ancient people?’

Some things are simply too precious to not provide a hiding place.

HIDING IN THE HOUSE

There is so much potential locked up within this generation. It is worth protecting. Worth sheltering. Worth guarding.

Atheliah knew she had to destroy her grandchildren because of the potential they held. Much like the false wall in Corrie ten Boom’s bedroom, the most effective hiding place for Joash was in the home. Likewise, our homes should be hiding places from the evils of this present world.

When Joash was of age, .Jehoida the priest sent for the captains and guard, and showed them the child King. Immediately this host of warriors and leaders understood the potential he represented. Jehoida gives them king David’s spears and shields from the temple, and in a dramatic show of support, they encircled the king and escorted him to the throne.

How safe is your home? Can you keep yourself, your spouse, and your children hidden until it’s time to be escorted to the throne? Will your home still have the old weapons and shields that saw previous generations safely through?

`And  he brought forth the king’s son, and put the crown upon him, and gave him the testimony; and they made him king; and anointed him; and they clapped their hands, and said, God save the king” (2 Kings 11:12).

If you keep your home a hiding place, holy and separated, one day your children will stand and receive a crown and a testimony. God save the king!

Wes Comer is the Campus Pastor at Faith Apostolic Church of Carmel in Carmel, Indiana.