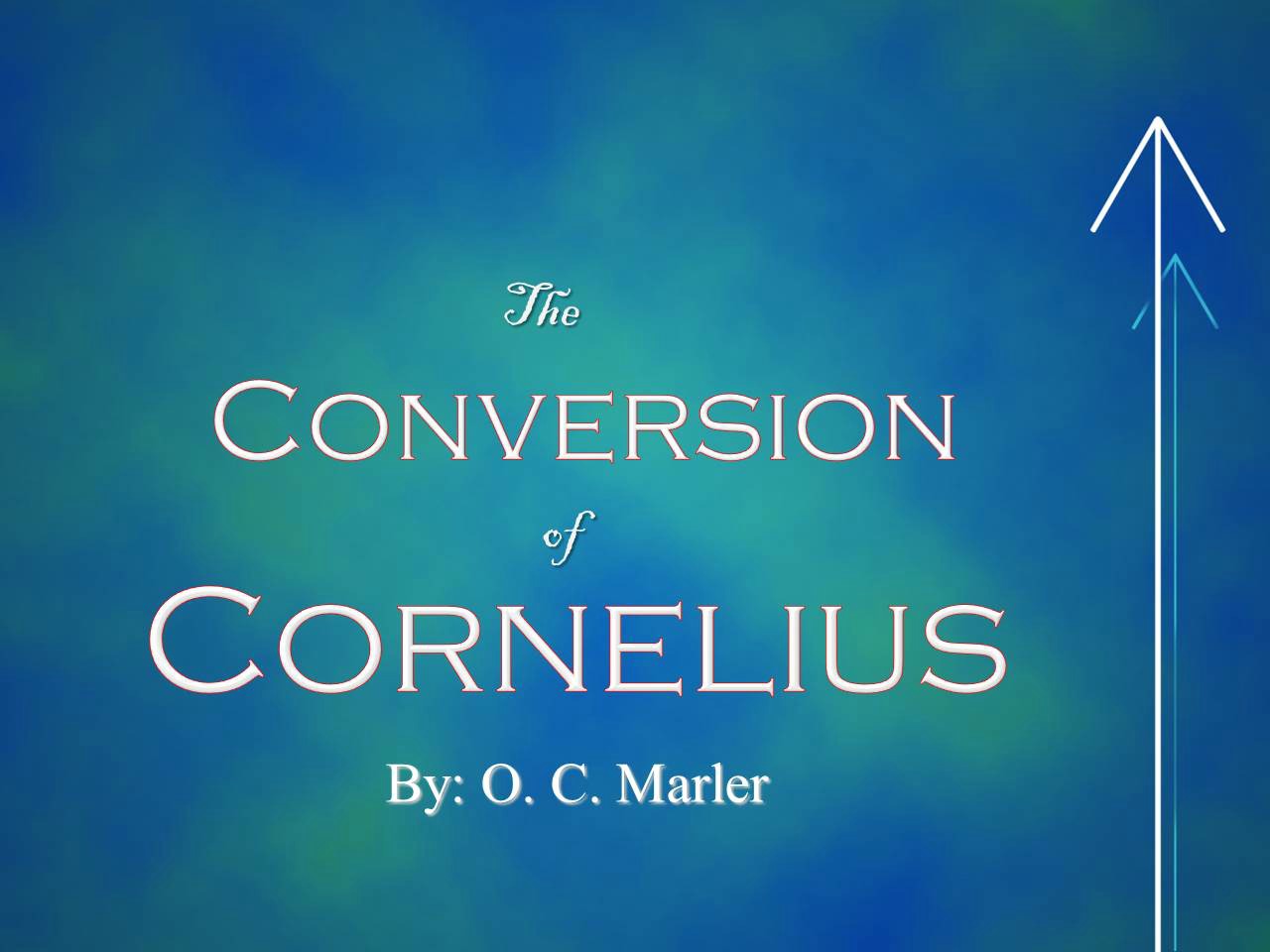 The tenth chapter of Acts introduces us to Cornelius, a centurion from the Italian Band. Acts 10:1, There was a certain man in Caesarea called Cornelius, a centurion of the band called the Italian hand. (2) A devout man, and one that feared God with all his house, which gave much alms to the people, and prayed to God always (3) He saw in a vision evidently about the ninth hour of the day an angel of God coming in to him, and saying unto him, Cornelius. (4) And when he looked on him, he was afraid, and said What is it, Lord? And he said unto him, Thy prayers and thine alms are come up for a memorial before God (5) And now send men to Joppa, and call for one Simon, whose surname is Peter: (6) He lodgeth with one Simon a tanner, whose house is by the sea side: he shall tell thee what thou oughtest to do. (7) And when the angel which spoke unto Cornelius, was departed, he called two of his household servants, and a devout soldier of them that waited on him continually; (8) And when he had declared all these things unto them, he sent them to Joppa. (9) On the morrow, as they went on their journey, and drew nigh unto the city, Peter went up upon the housetop to pray about the sixth hour (10) And he became very hungry, and would have eaten: but while they made ready, he fell into a trance, (11) And saw heaven opened, and a certain vessel descending unto him, as it had been a great sheet knit at the four corners, and let down to the earth: (12) Wherein were all manner of fourfooted beasts of the earth, and wild beasts, and creeping things, and fowls of the air. (13) And there came a voice to him, Rise, Peter; kill and eat. (14) But Peter said, Not so, Lord: for I have never eaten any thing that is common or unclean. (15) And the voice spoke unto him again the second time, What God hash cleansed, that call not thou common. (16) This was done thrice: and the vessel was received up again into heaven. (17) Now while Peter doubted in himself what this vision which he had seen should mean, behold, the men which were sent from Cornelius had made inquiry for Simon’s house, and stood before the gate, (18) And called, and asked whether Simon, which was surnamed Peter, were lodged there. (19) While Peter thought on the vision, the Spirit said unto him, Behold, three men seek thee.

Cornelius was a man who was living for God to the best he knew how. In fact, he lived such a good life he would be thought of today as very religious. He was over qualified for most churches today. He would probably he thought of as ‘religious right’ to those who despise consecration. Yet as good as he was he did not measure up to God’s plan for full salvation. Let’s note his consecration status.

When Cornelius saw the angel he said, “What is it Lord!” And he said unto him, “Thy prayers and thine alms are come up for a memorial before God.” Verse 5 continues, And now send men to Joppa, and call for one Simon whose surname is Peter. He lodgeth with one Simon a tanner, whose house is by the seaside; he shall tell thee what thou oughtest to do. Now isn’t it a surprise that Cornelius needed to do anything more?

After the angel left Cornelius called two of his household servants and a devout soldier and sent them to Joppa. At about the sixth hour Peter went upon the house to pray He became hungry and would have eaten but he fell into a trance and saw the heavens open and saw a great sheet let down to the earth and in it had beast, creeping things, and fowls of the air.

A voice came to him saying, Arise, Peter; kill, and eat. His response was not so, Lord; for I have never eaten anything that is common or unclean. Then the voice spoke back, What God has cleansed, that call not thou common. While Peter thought on the vision the spirit said unto him, Behold, three men seek thee. Go talk to them, doubt nothing.

To make a long story short, Peter got down from the roof where he prayed, spoke with them and heard about God’s talking to Cornelius. He wanted Peter to come to his house. The next day Peter and some of the brethren went to Cornelius’ house at Caesarea. When they arrived they found all his kin and near friends gathered there with him.

Acts 10:30, And Cornelius said, Four days ago I was fasting until this hour; and at the ninth hour I prayed in my house, and, behold, a man stood before me in bright clothing, (31) And said, Cornelius, thy prayer is heard, and thine alms are had in remembrance in the sight of God (32) Send therefore to Joppa, and call hither Simon, whose surname is Peter; he is lodged in the house of one Simon a tanner by the sea side: who, when he cometh, shall speak unto thee. (33) Immediately therefore I sent to thee: and thou hast well done that thou art come. Now therefore are we all here present before God, to hear all things that are commanded thee of God. (34) Then Peter opened his mouth, and said, Of a truth I perceive that God is no respecter of persons:

At verse 30, Cornelius begins telling Peter about how four days ago he had been fasting until a man in bright clothing said, “Send to Joppa and call for Simon.” Now Cornelius said “thanks for coming.” And in verse 33, Now therefore are we all here present before God, to hear all things that are commanded thee of God. I would now like you the reader, to do two things.

So in verse 34 Peter opened his mouth and began to preach as he did on the day of Pentecost.

Acts 10:44 While Peter yet spake these words, the Holy Ghost fell on all them which heard the word. (45) And they of the circumcision which believed were astonished, as many as came with Peter, because that on the Gentiles also was poured out the gift of the Holy Ghost. (46) For they heard them speak with tongues, and magnify God. Then answered Peter, (47) Can any man forbid water, that these should not be baptized, which have received the Holy Ghost as well as we? (48) And he commanded them to be baptized in the name of the Lord. Then prayed they him to tarry certain days.

Now Peter said in the very next verse 47, Can any man forbid water that these should not be baptized as well as we. I cannot understand why anyone would think baptism was unimportant or nonessential when on the day of Pentecost when Peter was asked, Men and brethren what shall we do? Peter clearly said:

The first thing Peter said after they received the Holy Ghost was, “what about baptizing these folks, just like we were baptized; and of course he was talking about Pentecost in the second chapter of Acts. Verse 8, and he (Peter) commanded them to be baptized in the Name of the Lord. Let’s not forget what Cornelius said to Peter in verse 33 we are here to hear all that is commanded thee of God. So Peter did not give them something that was optional or you can do it if you feel like it, but he put forth a command from God.

This article “The Conversion of Cornelius” by O. C. Marler was excerpted from the book Doctrine Does Matter. Pg. 55-67. August 2011. It may be used for study & research purposes only.

1 thought on “The Conversion of Cornelius (Entire Article)”