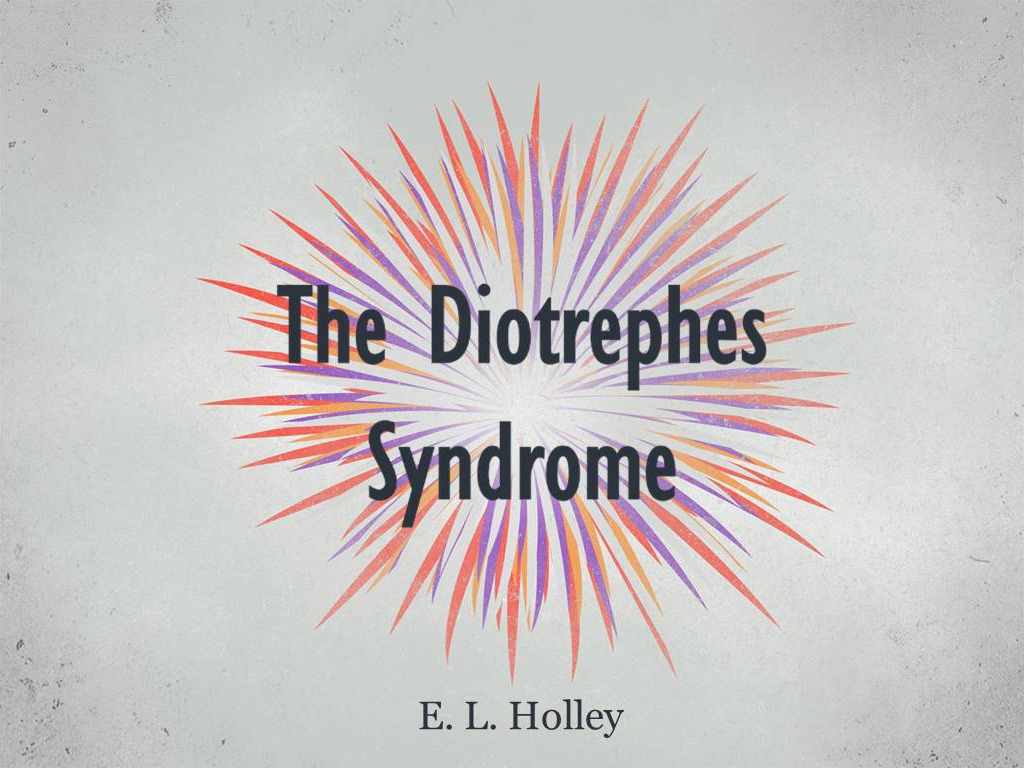 Tucked away in the ninth verse of III John is a reference to a spirit which neither originated nor died with Diotrephes (a man who was possessed by it). Its origin was in Lucifer and his aspirations, and until this hour it is unchecked and rampant. More than detrimental, this spirit is deadly and needs to be recognized for what it is and what it is capable of becoming.

As we unwrap this condition of heart let us ignore the man and his deeds. For if we observe him and his ungodly activities too closely we could miss the motive and thereby fail to recognize the spirit which is responsible. And that spirit undetected can project itself in many destructive ways.

Of Diotrephes it is written, “Who loveth to have the preeminence among them.” Notice the inspired apostle spoke not against him having the preeminence among them but rather against loving to have it. This is comparable to having a love of money. Money itself is not sinful but the love of money is the root of all evil. Moreover one does not have to have money to love it. It fact there seems to be a greater danger of loving both money and posts of prominence on the part of those who are not in the possession of them.

The very nature of the work of the church creates posts of prominence and demands the care and concern of responsible men to fill them. This was learned early in the history of the church. In the sixth chapter of Acts, a pressing need arose and dedicated men were assigned to the problem.

A thousand men cannot pick up a match stick. Neither could the multitude take care of this situation. Therefore out of the thousands seven were selected for the task. The very fact that so few were chosen from so many lent an air of prominence to their labor some chore.

This characteristic of the work of the church is evident in every phase of its operation. The whole congregation preaches the gospel through the work of one man in each local assembly: the minister. Various other phases of the church’s task are carried out by individuals. Each member has his own unique role to fill in the work of the entire body. Each works in harmony with the rest of the body under the direction of a central guide. Thus it is easy to see that posts of prominence are essential to the propagation of the gospel and the proper functioning of the church. The men who fill these posts are the instruments through which Christ works and they must be respected and honored as such.

But in our text, John exposes a very serious danger: the danger of loving, craving, or desiring to occupy the position of prominence. This longing to be foremost of an exalted rank caused this man to fail short of the standard of Christian conduct. In exposing this trait of Diotrephes’ John holds a mirror to our souls. Could we be overtaken by the same spirit?

At this point there must be a distinction made between desiring a good work and longing for what appears to be the glitter and glory of a post of prominence. Scripture teaches us to desire to do a good work. One must take great care, however, to distinguish between the urge to be important in the eyes of others and the desire to work in the kingdom of God. A close consideration of our attitude toward the work which does not put us in the limelight of public notice could be helpful in determining whether we are interested in the work or the glory. A close scrutiny of our own human nature will shed a lot of light on our desires.

Within human nature there is a spark which we call egoism. It was this self-love aspect that Jesus touched when He said, “Love thy neighbor as thyself.” He knows how much man thinks of himself! If we are not careful that spark of egoism can ignite into a raging and consuming fire!

When one is consumed with a desire to occupy a place of high rank, he becomes dangerous to himself and his brethren: indeed, to the kingdom of God. More often than not, he is actually the poorest candidate for such a post. The very desire to be preeminent is the weakest link in his structure. It becomes a formidable obstacle to him in any and every situation where his popularity might be involved. That inordinate craving for man’s approbation will cause him to follow the line of least resistance, whether right or wrong. Political expediency becomes the guiding principle in every decision and step of action. To one “who loveth to have the preeminence,” his own public image becomes his guiding light, and his supreme sovereign!

The cause of the kingdom means little to such men As Haman of old, they will willingly destroy multitudes it order to make one Mordecai bow down before them! To them, the projection of self is the only important thing it life, and it matters little who or how many must be stepped on to attain their selfish goal. Such a dominating desire for preeminence can blind and destroy the one possessed by it.

Under the satanic influence of this destructive spirit David’s own son, Absalom, so desired his father’s throne that he was willing to promote an insidious campaign t( discredit and dethrone him. His insinuations, innuendoes, and derogatory remarks all had one point: to build himself up by tearing his father down! He wanted to build an image of himself in the people’s minds as a great champion of their cause. In order to do this he thought I necessary to depict his father as a callous tyrant. Oh, how he must have desired the preeminence!

It is a wicked spirit that will cause someone to de fame a brother’s character, deprecate his every act, and try to make merchandise of any failure that can be pointed out and enlarged by criticism.

There is a divine justice which will not allow the triumph of such in the kingdom of God. “But,” it might be argued, “what about so and-so and thus-and-such?” We cannot properly judge by appearance. If one actually seems to gain a degree of prominence by such devilish means, he then becomes his own victim! He is tormenter on every side. He has no peace of mind. Why? Because such a person judges everyone else by his own twister pattern of conduct and he is miserable trying to escape what he thinks others are thinking about him! You see, t( such people, this is the only important thing in life: what others think about him. His every act is a haunting tor mentor.

If they never learn the futility of such folly in this life (if it were even possible to enjoy ill-gotten gains of preeminence), there will be a day when everything will be made right. Such men are to be pitied, not promoted.

Let us respect our leaders and hold their hands up in prayer. Pray for your pastor. Honor the members of the church. Respect every church officer and esteem them highly for their works’ sake. Then when you occupy such positions of responsibility and prominence, you can feel that others are respectfully praying for you, too. As you have sown, so shall you reap. It will make the load lighter! It is God’s way.

The above article “The Diotrephes Syndrome” is written by E. L. Holley. This article was excerpted from Holley’s book The Best of E. L. Holley.