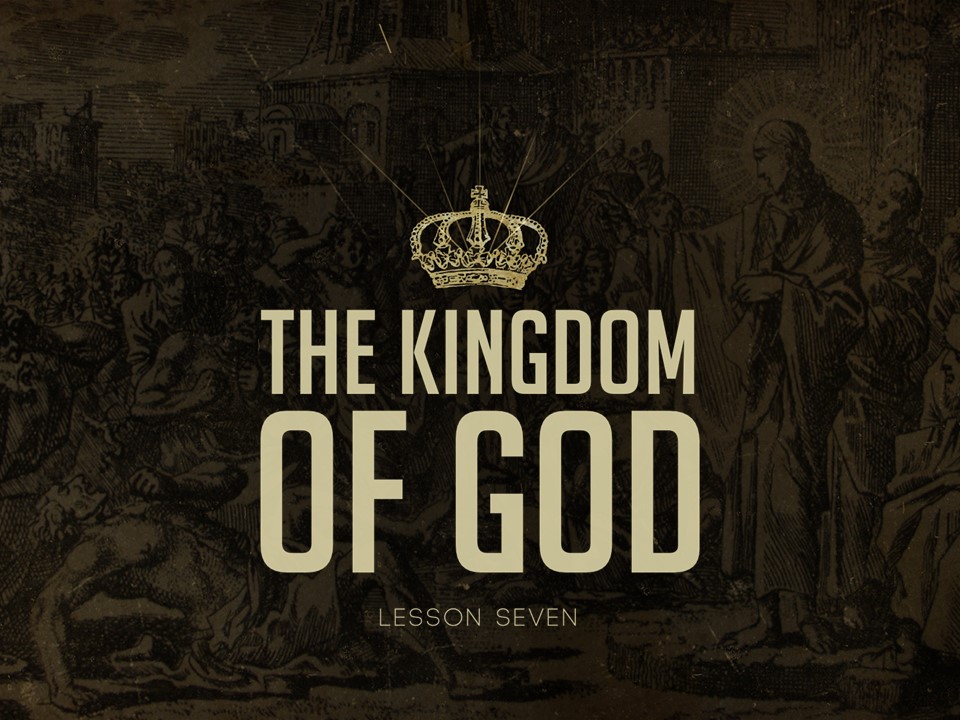 LESSON SEVEN
THE KINGDOM OF GOD

A. DEFINITION OF THE KINGDOM OF GOD:
Jesus taught a great deal about the Kingdom of God. This was the uppermost thought in the minds
of all the Jews. The hope of Israel was for their Messiah to come and overthrow their enemies.We
see the importance of this when we consider just how anxious His disciples were concerning the
kingdom (Acts 1:6).

There are two requirements for any kingdom: (1) There must be a King, a reigning monarch; (2)
There must be a realm with subjects over whom He reigns.

In the Kingdom of God, Jesus is the reigning King and anyone who is a member of the Kingdom has crowned Him King of his or her lives.

B. JESUS TAUGHT THE IMPORTANCE OF THE KINGDOMOF GOD:
Scriptural Reference:
“But seek ye first the kingdom of God, and his righteousness; and all these things shall be added
unto you.” (Matthew 6:33).

Here Jesus taught the importance of the Kingdom of God. In this verse of Scripture Jesus told
His disciples:

C. JESUS TAUGHT THAT THE KINGDOM OF GOD WAS A SPIRITUAL KINGDOM:
Scriptural References:

“The Kingdom of God cometh not with observation: Neither shall they say, Lo here! or, lo there!
for, behold the kingdom of God is within you.” (Luke 1 7:20-21).

When the Pharisees enquired concerning the Kingdom, Jesus told them that the Kingdom would
not come with outward display. They were looking for a display of pomp and splendor. This
Jesus said would not be. He also said that Kingdom was within them (in their hearts). He did not
mean the hearts of the Pharisees but rather the hearts of the disciples standing within their midst.
Also Jesus was standing within their midst and where the King is, there is also the Kingdom.
Jesus told Pilate that His Kingdom was not of this world.

The Kingdom of God would not be seen through physical evidence such as meat and drink, but
through the fruit of the Holy Ghost, righteousness, peace and joy.

Actually the Kingdom of God is Jesus reigning in the hearts and lives of His Spirit filled saints.

D. JESUS TAUGHT THAT THE KINGDOM OF GOD BEGAN WITH THE CLOSE OF
JOHN’S MINISTRY:
Scriptural References:

“Verily I say unto you, Among them that are born of women there hath not risen a greater
than John the Baptist: notwithstanding he that is least in the kingdom of heaven is greater than
he” (Matthew 11:11).

“The law and the prophets were until John: since that time the kingdom of God is preached, and
every man presseth into it” (Luke 16:16).

These two Scriptures teach the following facts:
1. The Old Testament closed with the ministry of John the Baptist;
2. Since the least in the Kingdom is greater than John, John the Baptist was not in the
Kingdom of God.

E. JESUS TAUGHT THAT IT WAS NOT EASY TO ENTER THE KINGDOM:
Scriptural References:
“And from the days of John the Baptist until now the kingdom of heaven suffereth violence, and
the violent take it by force” (Matthew 11:12).

“It is easier for a camel to go through the eye of a needle than for a rich man to enter into the
kingdom of God” (Mark 10:25).

These Scriptures state that Jesus taught that it was not easy to enter the Kingdom of God. There
was a price to be paid and few men were willing to pay the required price.

As we shall see in the next paragraph, Jesus said it was necessary to be converted and become as
a little child. The act of true repentance is involved here and it is not easy to repent.

Repentance calls for death to self, sin, the flesh and the world. This is far from easy. This is
where a man must press into it and take it by force.

F. THE NEW BIRTH IS NECESSARY FOR ENTRANCE TO THE KINGDOM:
Scriptural References:
“And said, Verily I say unto you, Except ye be converted, and become as little children, ye shall
not enter into the kingdom of heaven” (Matthew 18:3).

“Jesus answered, Verily, verily, I say unto thee, Except a man be born of water and of the Spirit,
he cannot enter into the kingdom of God” (John 3:5).

Jesus spoke the first of the above statements to his disciples; He spoke the second to Nicodemus,
a religious leader among the Jews. In both instances these words were not spoken to wicked men
but to religious men. However, this fact placed even greater emphasis upon the importance of the
new birth. Our Lord states the requirements for entrance to the Kingdom very clearly:
1. One must be converted and become as a child;
2. One must be born of water;
3. One must be born of the Spirit.

In fact Jesus stated that a man would not even see the Kingdom let alone enter the Kingdom, if he
were not born again.

To clearly understand just what Jesus meant by being born of the water and the Spirit, we must
study the book of the Acts where the message of salvation is preached by the Apostles.

G. JESUS GAVE THE KEYS TO THE KINGDOM TO PETER:
Scriptural Reference: “And I will give unto thee the keys of the kingdom of heaven” (Matthew 16:19).

Here Jesus gave to the Apostle Peter the power and authority to preach the gospel of the
kingdom. Peter was given the keys to open the door of the kingdom. Peter used these keys and
opened the door to the Jews (Acts 2), Samaritans (Acts 8), and Gentiles (Acts 10).

The message that Peter preached was:
1. Repentance;
2. Water baptism in the Name of Jesus; 3.

Baptism of the Holy Ghost (Acts 2:38).
This is the message that opens the door of the Kingdom to the person who desires to enter.