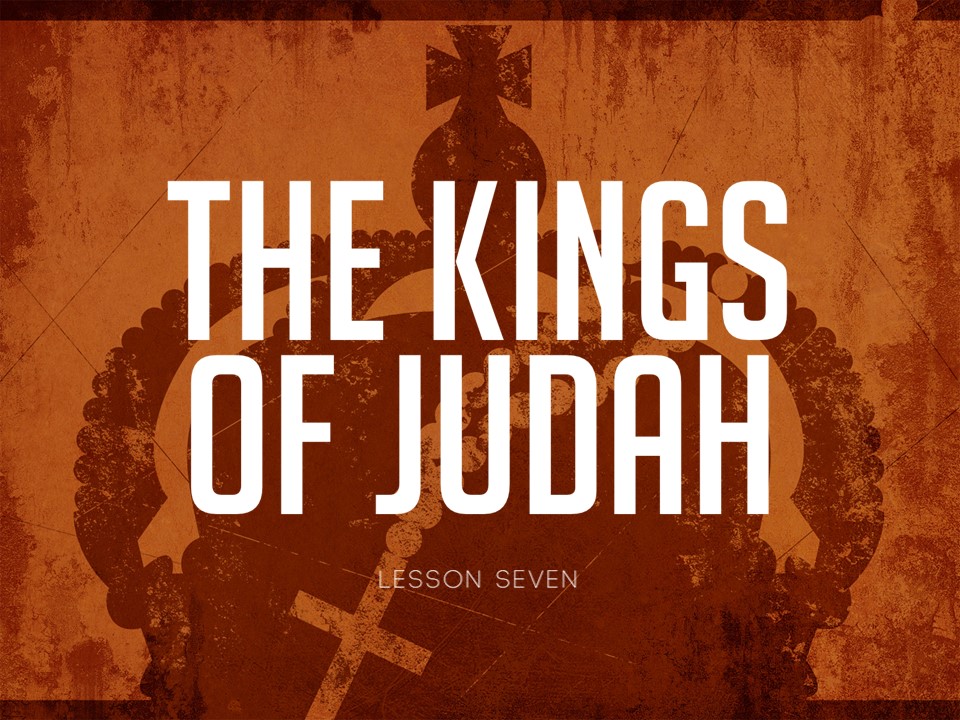 LESSON SEVEN
THE KINGS OF JUDAH

A. THE KINGDOM OF JUDAH:

The Kingdom of Judah continued for almost 400 years (975-586 BC) or 150 years longer than
Israel. Like Israel, there were 19 kings but they ruled for longer periods of time. All the kings
of Judah were of one dynasty and were lineal descendants of King David. About half of these
kings were good and for that reason the kingdom continued longer than that of Israel. The
longest reign was that of Manasseh’s, 65 years. The shortest reign was that of Jehoahaz which
lasted only three months.

The prophets who ministered during this period of time were: Isaiah, Jeremiah, Joel, Zephaniah,
Micah, Nahum and Habakkuk. The prophecies of these men were literally fulfilled.

B. FOUR PERIODS OF TIME:
The history of the Kingdom of Judah was divided into four periods of religious decline and
three revivals.

1. FIRST PERIOD – Between the reigns of Rehoboam & Jehoshaphat
– about 86 years.

2. SECOND PERIOD – Between the reigns of Joash and Hezekiah
– about 207 years.

3. THIRD PERIOD – Between the reigns of Manasseh and Josiah
– about 88 years.

4. FOURTH PERIOD – Between Jehoahaz and Zedekiah
– about 23 years.

C. REHOBOAM: (I Kings 12:20-24; 14:21-31).
After his rejection by the northern tribes, Rehoboam tried to bring the entire nation under his
control. This move was stopped by the advice of the prophet Shemaiah.

Many priests and Levites came from the Northern Kingdom and supported the one who gave
outward regard to the worship of Jehovah. Like his father, he had many wives who led him into
idolatry. As punishment, the Lord permitted Shishak, King of Egypt, to attack him and plunder
both the palace and the Temple.

Rehoboam died at the age of 58 years.

D. ABIJAM (ABIJAH): (I Kings 15).
He reigned three years. He had fourteen wives, twenty-two sons and sixteen daughters.
He declared war against Jeroboam and recovered some of the border cities of Israel.
His reign was one of religious apostasy. Cult images of various types were venerated and ritual
prostitution was practiced.

The first ten years were occupied in religious reforms and in abolishing idolatry.

In later years, his faith weakened. He lost territory to Baasha, King of Israel and appealed to
Ben-hadad of Damascus for help. The prophet Hanani rebuked him and was imprisoned for
three years.

He suffered from a serious foot disease and turned the government over to his son,
Jehoshaphat.

F. JEHOSHAPHAT: (I Kings 22:2-33; 41-50).
He was a contemporary of three kings of Israel: Ahab, Ahaziah and Jehoram. He was a godly
man and reigned for 25 years. The kingdom regained much of its former prosperity and was
encouraged in the true worship of God.

His greatest errors were in making alliances with Ahab and Ahaziah. From this came the grave
mistake of marrying the crown prince, Jeroram, to Ahab’s daughter, Athaliah. With this
marriage, a Dark Age began. It would be sometime before a good king would reign again.

His wife, Athaliah, dominated him. He built a Baal temple in Jerusalem. He assassinated his
brothers. The Edomites cut off the sea route to Arabia. The Arab’s from the south plundered
the palace and carried off his harem. All of his sons except Ahaziah were killed in battle. He
died at the age of forty.

H. AHAZIAH: (II Kings 8:25-29).
He was also called Jehoahaz. He reigned only one year. His mother who encouraged Baal
worship and an alliance with his uncle, Jehoram of Israel, influenced him.
Jehu killed him while visiting Jehoram.

I. ATHALIAH: (II Chronicles 24:7).
She ruled for six years. She was a tyrant. She had the entire royal seed (her grandchildren)
slain and then took the throne. One child escaped, Joash. When Joash was six years old, the
high priest showed him to the captains of the guard. He was proclaimed king and Athaliah was
slain.

J. JOASH: (I Kings 11, 12).
He was also called Jehoash. He was the son of Ahaziah and Zibiah, a woman of Beersheba.
Later he married two wives and had several sons and daughters.

He reigned for forty years. The high priest, Jehoiada, was his guardian. As long as the priest
lived, Joash did what was right. After Jehoiada’s death, he lapsed into idolatry. He bribed Hazael with treasures from the house of the Lord.
Finally he was murdered in bed by one of his own servants.

K. AMAZIAH: (II Kings 14).
He was the son of Joash and reigned twenty-nine years. He began well but ended badly. He
defeated the Edomites but carried home the gods of Edom. He began to worship these gods.
He was assassinated.

L. UZZIAH (AZARIAH): (II Kings 15).
He came to the throne when he was sixteen and reigned for fifty-two years. He was a capable
administrator and was talented in engineering.

He tried to assume the ministry of the priest by offering incense on the Golden Altar. He was
stricken with leprosy and spent the last years in seclusion.

The prophet Isaiah received his call during the year of Uzziah’s death.

M. JOTHAM: (II Kings 15:32-38).
Jotham’s record is clean. There was no sin laid to his charge. He reigned sixteen years and the
kingdom prospered.

Isaiah and Micah prophesied during his reign.

N. AHAZ: (II Kings 16; II Chronicles 28).
He reigned sixteen years. He had the reputation of being the most wicked king and idolatrous
of all the kings of Judah.

He burned his own children as sacrifices in his idolatrous worship.
It was a good thing that he died at an early age of thirty-six years, otherwise Judah might have
been taken captive at this time.

O. HEZEKIAH: (II Kings 18-20).
Hezekiah carried out a great reformation. The high places of idol worship were destroyed. The
Temple was re-opened and the Passover celebrated.

In the fourteenth year of his reign, Hezekiah refused to pay tribute to Sennacherib, King of
Assyria. Sennacherib prepared to invade Judah. He went into Egypt to wage war. When he
returned, the Lord killed 185,000 Assyrian warriors and Sennacherib retreated.

At this time, Hezekiah had a serious illness. He earnestly prayed and the Lord added fifteen
years to his life.

P. MANASSEH: (II Kings 21:1-9).
He was the son of Hezekiah. He was born during Hezekiah’s added fifteen years. He became
king at the age of twelve and reigned for fifty-five years. He destroyed the faith that his godly
father had established and revived all the abominations his father destroyed. He was the worst
of the Jewish kings.

Black arts flourished and all forms of evil were indulged in. The Temple was polluted with
images to Baal. His children were burned in honor of Baal and he shed much innocent blood.

Tradition states that he killed Isaiah by placing him inside a hollow tree and sawing him asunder
(Hebrews 11:37).
The King of Assyria took him captive with hooks. Here at Babylon, he experienced genuine
repentance. When he was allowed to return to Jerusalem, he tried to abolish idolatry but his
reform efforts were not very successful.

Q. AMON: (II Kings 21:18-26).
He was the godless son of Manasseh. He copied all his father’s sins. He was assassinated
after reigning only two years.

R. JOSIAH: (II Kings 22:1-23:10).
He became king at the age of eight. At the age of sixteen, he devoted his time to the work of
God and commenced reformation at the age of twenty. With a hatchet, he began the destruction
of the images of idolatry.

The Book of the Law was discovered and Josiah had it read to the people. The Temple was
cleansed and a Passover held.
He was slain in battle as he fought with Egypt.

S. THE FINAL DECLINE:
Jehoahaz, son of Josiah, reigned only three months and then was carried away captive into
Egypt.

It was during the reigns of the final three kings that the captivity took place and we shall study
regarding them in the following lesson.