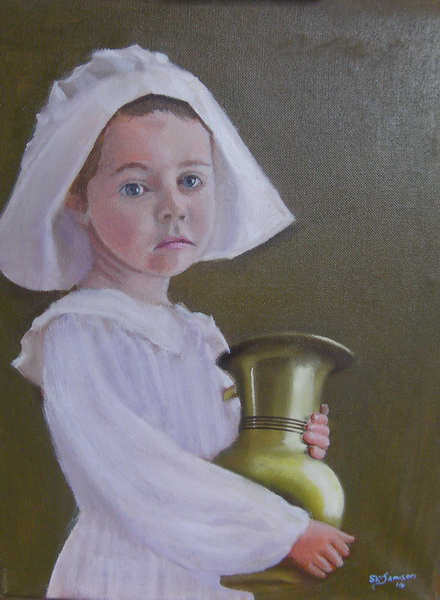 And the Syrians had gone out by companies, and had brought away captive out of the land of Israel a little maid; and she waited on Naaman’s wife” (II Kings 5:2).

The exact age of the little maid is unknown, however, it is believed she was 20 years of age or less, possibly as young as 10 or 12. Obviously she was raised in a Godly home and was taught of God’s healing power. Captured from her home and taken to a foreign land where everyone was a stranger, she found her faith was not shared.

Serving Naaman’s wife surpassed the daily routine when she heard of the master’s incurable leprosy. She didn’t hide who she was or what she believed. Fearlessly she declared to her mistress, “…would God my lord were with the prophet that is in Samaria” for he would recover him of his leprosy” (II Kings 5:3).

With implicit trust and confidence in God, she took a courageous step of faith. Notice, she used the word “would” as opposed to “could.”

It didn’t matter to her that she was the little maid. What mattered to her was getting the leprous master to the praying prophet for a heavenly healing.

When Naaman arrived at Elisha’s house, Elisha sent a messenger saying “…Go and wash in Jordan seven times, and thy flesh shall come again to thee, and thou shalt be clean” (II Kings 5:10). Naaman was wroth that Elisha did not come out to him, stand and call on the name of the Lord his God and strike the leprosy. He went away in a rage when told to go wash in the Jordan River seven times.

Evidently, the little maid had influenced Naaman’s servants, and they spoke to Naaman saying, “…if the prophet had bid thee do some great thing, wouldest though not have done it? How much rather then, when he saith to thee, Wash and be clean” (II Kings 5:13)?

We know the rest of the story. Naaman dipped himself in the Jordan River seven times and his leprosy was removed. If the little maid had remained silent, Naaman would not have experienced God’s healing power. The challenge is still the same. No matter how young you are or what your status in life is, you can be a witness for God. Tell someone today about your mighty God!