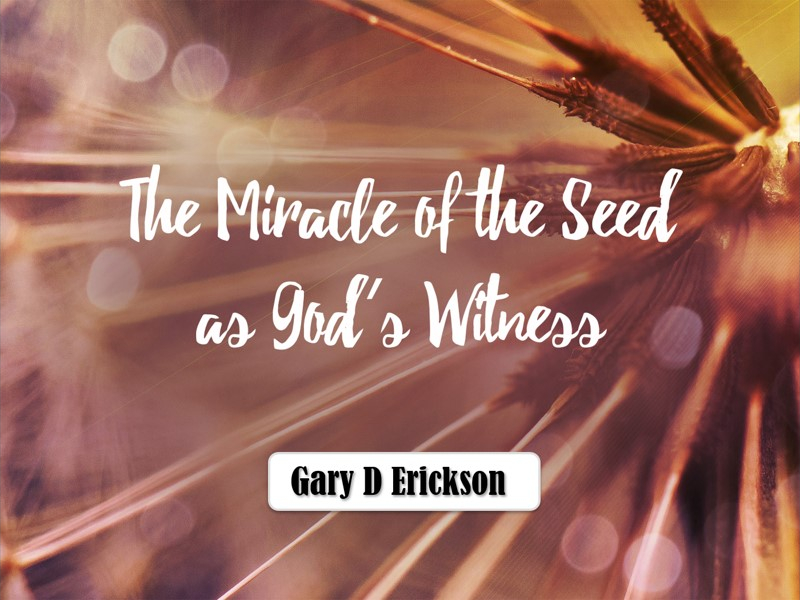 Within a week most of the little seeds had begun to show signs of life. Tiny cracks formed in the soil as tender little shoots forced their way to the surface. The pale green shoots turned to dark green leaves and, with time, the rows were wrapped up with lush vines. Before long I was back in the field with my straw bushel basket, picking peas.

“Verily, verily, I say unto you, Except a corn of wheat fall into the ground and die, it abideth alone: but if it die, it bringeth forth much fruit” (John 12:24).

In my childhood, I lived on a farm. Every year, my father mounted the old tractor and attempted to conquer our small acreage in Keithville, Louisiana. Since field peas were a staple on our table, there was always a large patch of these nutritious green pods to De cared for.

My father was not satisfied with the particular strain he was raising, so a number of varieties were tried: “brown crowders,” “purple hulls,” “cream peas and red rippers.” None of these seemed to suit my father. Finally a friend came along and offered to help with yet another variety.

They were planted in the spring and grew wonderful­ly. They blossomed on time, the vines ere healthy, and the pods were long and full. The part I liked most was the ease with which they could be shelled. After my mother served the first dish of these little smooth seeds, the deci­sion was unanimous. We had found a palatable little pea that would grace our table for many years to come.

Surely, we thought, such an amazing little pea would have an appropriate name such as “marvelous gems,” “heavenly pride” or “angel pods.” Yet my father was told that they were just called “John Browns.” No one knew where they came from or how they were named. The local seed store had never heard of them. Because of the lost pedigree, it was necessary to save some of the seeds for future planting.

After the canning season had ended, I was allowed to pursue other things, which was a great relief from the word Id of picking and shelling peas. In the busy activity of my childhood games, however, I did notice the forethought my lather had concerning the peas.

The heat and dryness of the summer began to set in. I lie verdant vines began to wither and die. Soon the leaves turned brown and many fell to the ground. The pea patch became an ugly scene of tangled dead vines with ugly brown pods hanging from the stems.

My father, with his tow sack, began the job of collect­ing the remaining pods. After filling several sacks, he returned to the barn and there began to do some very in­teresting things. He took a bat and, with the burlap sack securely tied, began to beat the dry peas. As the peas were beaten, the brittle hulls began to break up, emptying their contents. After determining the job was done by feeling the loose peas in the bottom of the sack, the next phase of preservation began. He placed a large fan where it would blow a current of air past the peas as they fell from the sack to a container on the ground. The dry hulls were blown away, while the little seeds were kept for the next season.