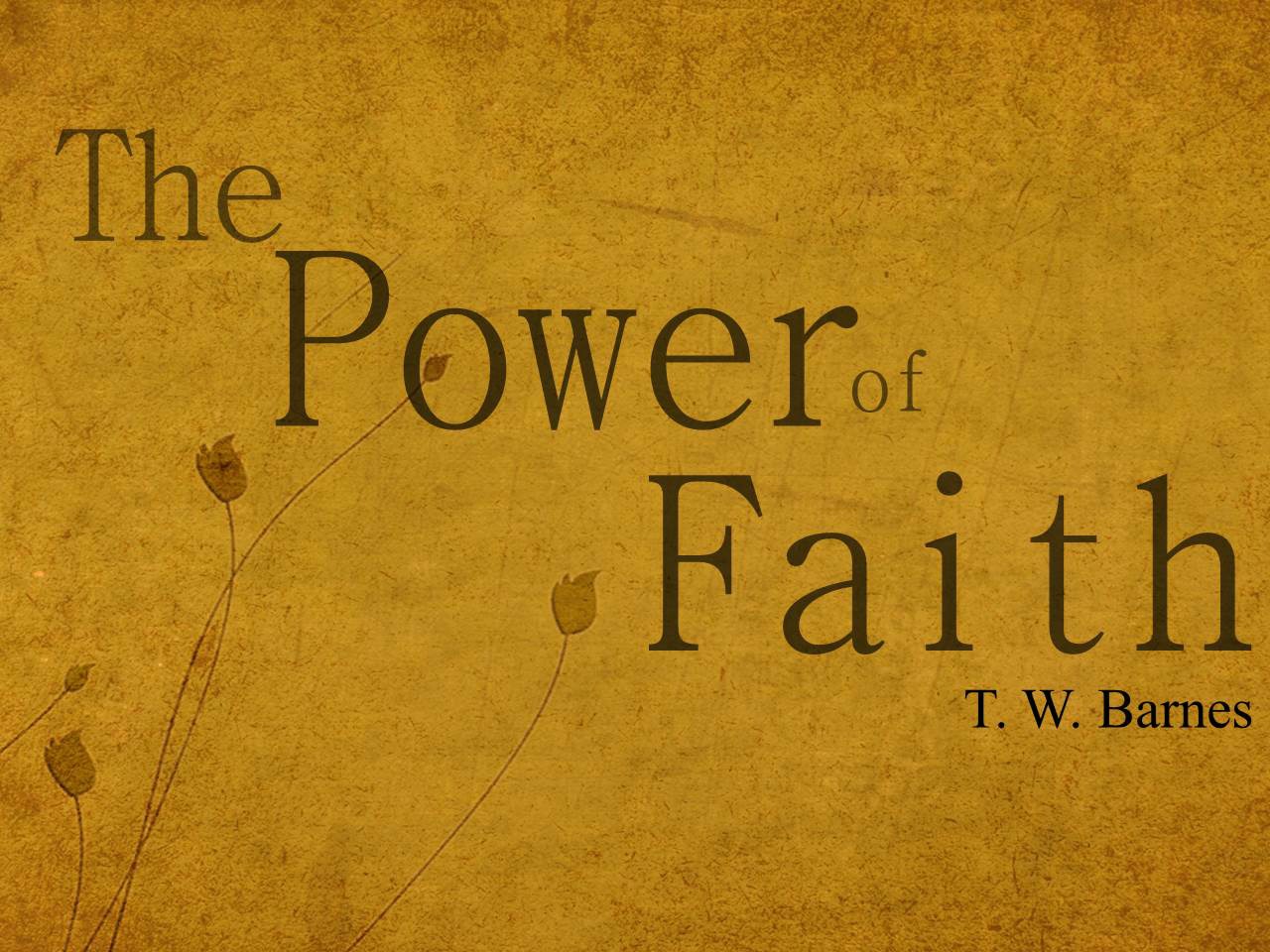 Now faith is the substance of things hoped for; the evidence of things not seen. For by it the elders obtained a good report. Through faith we understand that the worlds were framed by the word of God, so that things which are seen were not made of things which do appear (Hebrews 11:1-3).

And Jesus answering saith unto them, Have faith in God. For verily I say unto you, That whosoever shall say unto this mountain, Be thou removed, and be thou cast into the sea; and shall not doubt in his heart, but shall believe that those things which he saith shall come to pass; he shall have whatsoever he saith. Therefore I say unto you, What things soever ye desire, when ye pray, believe that ye receive them, and ye shall have them (Mark 11:22-24).

In these Scriptures we see that the Lord has promised great things to them who will believe. The worlds were spoken into existence by faith. The Lord Jesus Christ tells us there that a mountain can be removed and cast into the sea if we believe with all of our heart. Now, of course, we are not praying for a literal mountain, six or eight thousand feet high, to be cast into the sea; but we have a lot of mountains that loom before us and they block our pathway.

Today, you may be looking at one. It may seem to you that it is impossible for you to ever go over it or around it. But Jesus says, “For verily I say unto you, That whosoever shall say unto this mountain, Be thou removed, and be thou cast into the sea; and shall not doubt in his heart, but shall believe that those things which he saith shall come to pass; he shall have whatsoever he saith” (Mark 11:23).

Allow these words to sink down deep into your heart, because as you read this message, we pray that faith will grow in your hearts and that you will grasp the invisible power of God and speak to this mountain, through prayer, and watch it melt away. Your mountain might be sickness. The Lord has promised to heal. Your mountain may be a demon that torments, oppresses, and causes you to be nervous. The Scriptures declare that you can speak to this thing in the name of the Lord Jesus Christ and it will flee away. All things, Jesus tells us, are possible if we believe.

We read in the Old Testament some of the actions of faith. You see, many times we claim that we believe, but we don’t act on our faith. We say, “Why, I know that God can do these things.” But if you really believe it with all your heart, you will do something about it. You will fall upon your knees and ask God to help you, and you will take your stand against the evil that is always trying to invade your life.

When the children of Israel were about to cross the river Jordan, the Lord gave the command that as the priests who bore the ark stepped into the river, the moment the soles of their feet touched the water, the water would roll back. I want you to get a picture of this and compare it to yourself. They were commanded before this multitude of people to walk off into the river just as if it were dry. We can see this great multitude standing on the banks of the river Jordan as these priests marched straight into the river, and sure enough, when the soles of their feet touched the water a great miraculous power came into action and the waters rolled back. They acted on their faith. They could have sat on the bank and said, “No, we’ll never move until the Lord rolls the water back, and then we’ll go.” But, you see, the Lord says that when you pray, believe that you receive it, and then ye shall have it. You act on your faith, and then God will move in your behalf.

When the children of Israel were going into Jericho, huge walls were around the city. The people were commanded to march around the walls day in and day out. This they did. Finally the day came when they were given the command to shout, and all of them together lifted up their trumpets and their voices. When they did, the walls came tumbling down.

I want you to notice that they shouted before the walls of Jericho fell down. There are a lot of problems that would flee if we would shout first. A lot of sicknesses would vanish if we would pray and believe God first, and not wait until they are gone before we start believing God. They shouted at the top of their voices, and these huge walls came tumbling down. Again the invisible power of God came into action and these great walls fell down. There are invisible powers around about us that can remove these mountains, that can drive these troubles away; but it is up to you and me to shout first, to believe first, to stand upon God’s Word, and then God will move.

There was an old widow woman about to starve to death; she and her son. And the prophet Elijah came by one day and said, “Fear not; go and do as thou hast said: but make me thereof a little cake first, and bring it unto me, and after make for thee and for thy son.” (See I Kings 17:8-16.) Now, this woman had told the prophet plainly that she only had enough for her and her son, and when this was eaten they would both die. But he said, “No, make me a pan of bread first.” She went and made the prophet the bread and brought it to him. When she went back, behold, the barrel still contained meal. I want you to notice again the power of faith when we act on it.

When we act on our faith first, then God moves. From that day, until the famine was over this woman’s meal barrel “wasted not.” She obeyed first; she went in spite of the way she felt, and God worked a miracle. She always had meal and oil. As soon as she had taken out this meal and went to bake it, the invisible power of God came into action and multiplied the meal that was in the barrel. God can make the little health that you do have spring forth, and your whole body can be filled with health.

Again, Israel was about to go to battle and didn’t have any water. They were about to thirst to death. The prophet Elisha gave forth this command in II Kings 3:16-17, “And he said, Thus saith the LORD, Make this valley full of ditches. For thus saith the LORD, Ye shall not see wind, neither shall ye see rain; yet that valley shall be filled with water, that ye may drink, both ye, and your cattle, and your beasts.”

He said, “Go out there in that hot sun and begin to dig ditches.” No clouds, no wind—nothing in sight. They went out and began to dig ditches. Water was coming down across that valley. They didn’t see it anywhere, but God knew where it was, and it would fill all of the ditches. I imagine that the fellow that dug the deepest ditch got the most water. Can you see that great crowd of people working, digging ditches when the sun was still shining? There were no clouds to be seen anywhere; the wind wasn’t even blowing; yet they were digging ditches. This was faith in action. When they put their faith in action, the power of the invisible began to move. The water began to overflow and run across that valley and filled all the ditches with water. Faith in action. We must act on our faith. Believe first.

Old Naaman the leper (II Kings 5:1-19) had to dip seven times in the river Jordan before he was cleansed. He didn’t like the idea because he was a Syrian, and he would much rather have gone back to some clean, beautiful river in his own country and bathe. The prophet Elisha said, “You tell him to go out and dip seven times, and his flesh shall come again to him and he shalt be clean.” At first he was very angry because it seemed so simple. A lot of things that God tells us to do might seem a little foolish sometimes, but they aren’t. Finally the servant persuaded Naaman to go wash. He went out a leper, spots all over his body—perhaps sores eating away at his fingers. He dipped the first time—nothing happened. He dipped the second time, the third, the fourth, the fifth, and the sixth time and yet nothing happened. But the Lord said, “seven times.” When he went down that seventh time, he came up well, perfectly well. There was not a spot of leprosy; every sore was gone; his flesh was brand-new, just like a child’s flesh. Why? Because Naaman put his faith in action. He acted his faith out and this, my friend, is the power of faith. When you put action in your faith, it works every time.

You, too, can be cleansed like Naaman was cleansed. Jesus Christ is the same, yesterday, today, and forever. If we will pray and believe and act faith, the Lord will do the rest.

This article “The Power of Faith” by T. W. Barnes was excerpted from: Pure Faith written by M. D. Gray. 2006. It may be used for study & research purposes only.

1 thought on “The Power of Faith (Entire Article)”