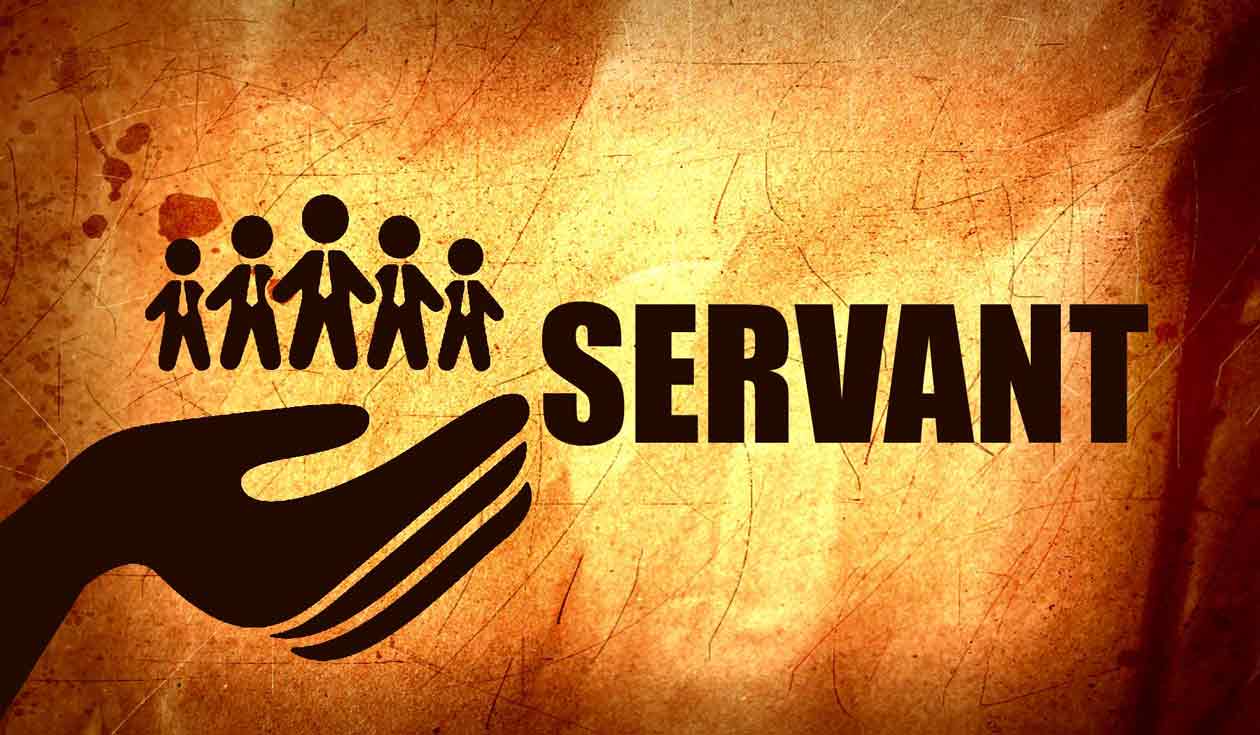 Clambering pell-mell over each other, multitudes of millions rush toward the object called success. Some seek to reach their destination by roughly stamping over others to get there, only to be lost in the shuffle and left wonder- ing what went wrong. Careening crazily down the high- way of life and bypassing rules in order to reach success, many have crashed and are left desolate.

That does not sound like success to some people. They cry, “To be a servant? That teaching is absurd.” Yet upon closer examination it does not appear to be so crazy. Is not the great doctor but a servant to people? What about the politician or the public leader, the minister or the banker; they are servants to people. Without people their office or position would no longer exist. To serve is not so demeaning after all, but it is fulfillment. It is actually the spirit of serving that makes a person great.

There was a young man who was captured in his youth, taken by the Babylonians into the court of King Nebuchadnezzar. There he was almost slain before he had a chance in life (Daniel 2:13).

When Daniel heard that he and his fellows were to be killed at the king’s command, he inquired of the captain of the king’s guard as to why the decree was so hasty. Arioch, the captain, gave him the reason: the failure of the wise men to make known a dream to the king. When he heard this Daniel asked the king for more time. That night God revealed the secret to Daniel that had been troubling the king.

Immediately Daniel blessed the name of God, thanking and praising Him (Daniel 2:20, 23). Daniel revealed his spirit of thanksgiving and praise again when he stood in the presence of the king and magnified God (Daniel 2:28).

The king sensed something special about Daniel and exalted him to the position of “ruler over the whole province of Babylon, and chief of the governors over all the wise men of Babylon” (Daniel 2:48). After being promoted to this great position Daniel made a request to the king in behalf of his three friends, Shadrach, Meshach, and Abednego. He asked that they be placed in a position to oversee the affairs of the province of Babylon, and the king agreed. Because of Daniel’s excellent spirit, he did not forget his friends on his way up.

We see over and over instances that reveal his spirit. When he was commanded to eat the king’s meat, Daniel requested that he might not defile himself with it. He did not say, “I’m not going to do that,” in a belligerent atti- tude, even though in his heart he knew he would not do it. Instead he was tactful and courteous.

After the deaths of Nebuchadnezzar and Beishazzar, King Darius of Persia ruled over the land. He too sensed in Daniel a special quality and made him the first presi- dent of the land and ruler over the whole realm. When jealous officials sought to find fault with him, someone spoke up, “We shall not find any occasion against this Daniel, except we find it against him concerning the law of his God” (Daniel 6:5).

Daniel 6:10 reveals the secret of his greatness. After the king’s decree forbidding prayer to anyone but him for thirty days on pain of death, Daniel went into his room, “kneeled upon his knees three times a day, and prayed, and gave thanks before his God, as he did aforetime.” His communion with God was as natural as breathing. It was the core of his existence.

King Darius’s description of Daniel after his night in the lions’ den is significant: “0 Daniel, servant of the living God, is thy God, whom thou servest continually, able to deliver thee from the lions?” (Daniel 7:20). The king identified him as a faithful servant of God.

1. He constantly blessed and thanked the Lord.
2. He was thoughtful of his friends and considered their welfare.
3. He magnified the Lord in the presence of the ungodly
4. He prayed habitually three times a day.
5. He had an excellent spirit.
6. He served God continually.
7. He fasted often. (See Daniel 9:3; 10:2-3.)

Daniel’s spiritual life reveals his power with God. He did not grumble, “Everything is going against me,” but instead he praised God always.

Being a servant does not mean being a doormat, or a weak-kneed, hobbling individual. The servants of God in the Bible were full of stamina, resolution, and power. If anyone had great power and authority it was the servants of Jesus Christ. In being His servants, they became all things to all people. (See I Corinthians 9:22.) They used their power to help other people lead fuller, richer lives by introducing them to Christ and then helping to meet their physical needs as well.

What the church needs today is not to develop more programs but to follow the example of the early church in loving, caring, sharing, and giving to one another. Love will cause us to do anything necessary. It caused Jesus to hang in pain and shame when He had the power to do otherwise. Love must become the motivating factor of the church.

The other day the phone rang and I heard a voice in distress. My heart went out to this young woman.. Since I was in the middle of preparing dinner, I reached over and switched off the stove, for what I was cooking needed my attention. My whole focal point at that moment was to help someone in need.

She needed ministering to, and as I was the one she had called, I needed to minister to her. I listened to her, sympathized with her, and then gave her hope of further help, for the Bible says, “Bear ye one another’s burdens, and so fulfil the law of Christ” (Galatians 6:2).

When she called me back later she said, “I felt something come across over the phone. I knew I had a friend.” Ministering to others is what Christianity is all about. People do not need to be judged; they need to be loved and helped. Jesus came not to condemn but to save.

A lady called the church one night sobbing, and one of the leaders asked me to talk to her. When I answered the phone my first inclination was not to talk to her, because she was a woman I had helped many times and who always seemed to fail. It had been a year since I had talked to her, but as I listened to her sob out her story— “I need God. I can’t go on living this way! Please help me!”—my heart broke within me. I thought, This woman is desperate. Forget the past, she needs help now. She said, “I need prayer tonight.” I asked her if she could come to the church. She had only a fourth of a tank of gas, and she had to use that to get her children from school and to go to work, so she could not come.

I said, “Well, let’s pray over the phone.” Did we pray! We had an old-fashioned prayer meeting right on the phone. She cried out to God, calling on the name of the Lord, and we both felt the power of the Lord minister to her aching heart. After praying, I gave her hope for her future. As I started to hang up I told her we loved her. She said, “Oh, thank you for helping me and caring. I feel so much better now.”

Was it worth it? Is it worth helping people who stumble and fall often? Jesus said it was the sick who needed a physician. The blind, the lame, the brokenhearted, the captive, the sin sick — those are the ones who need ministering to. The morning ladies prayer meeting of our church has become like a hospital in the church. People know where to come when they have a need. The ladies are never too busy to minister to the down and out, the lonely, the burdened, the sick, and the fearful. It does not matter whether the need is spiritual, financial, physical, or mental, they are there to help. The spirit of the early church has gotten a hold of them, and many miracles occur daily because of the servant spirit that characterizes that meeting.

It does not matter that their names are not splashed across the news or that most people do not know what is going on, because true servant-hood does not seek to have its name in neon lights. It seeks only to do the will of the Father and to glorify Christ.

Greatness is not determined by how many people know our name. If that were true Adolf Hitler, Judas, and Cain would be considered great. Greatness is deter- mined by our character. It consists of honesty, kindness, mercy, diligence, and perseverance. It is doing a job well, giving everything our best, loving much, caring much, and helping to lift someone else’s load.

I watched a nameless young man bring a load of sacks of concrete into a lumberyard. He undid all the ropes that tied it down and rolled them up easily. To me it looked difficult, but to him it was old hat. He was doing a job and doing it well. Without people like him no churches would be built, no sidewalks poured, or skyscrapers erected. He was one of many of a chain of people who make things happen.

Many great people are involved in life but their names are never known. They are like the nameless young man I watched, doing their job with a smile. But God is a good bookkeeper. He knows if we have the true spirit of a ser- vant and are doing our best at a job given to us, serving well. He also knows if we go beyond the appointed responsibility and reach out to help those to whom we have no obligations. That is true servant-hood.

Let us not seek greatness, but let us seek to be a servant of the Lord Jesus Christ. Only then will we receive fulfillment and a reward, for the whole law is bound up in loving God with all our being and loving our neighbor as ourselves. (See Matthew 22:35-40.)

“A curious bit of history is related concerning the great violinist Paganini. One night in Paris, where he was to play before a great audience, as he was tuning his violin he broke one of the strings. A wave of disappointment swept over the audience. Paganini paid no attention to it but began to play with the three remaining strings, working his thumb on another string until that also snapped.

“Again the audience was nettled, but he continued to play until a third string snapped and hung down upon the violinist’s arm. The audience plainly was becoming disgusted, believing he had a poor violin.

“Quietly stepping to the front, Paganini said: ‘Ladies and gentlemen, you now hear one string and Paganini.’ He began to bring such wonderful music out of that one string that the audience leaned forward in the seats and strained their necks that they might hear it all.

“He sat down as the entire house wildly applauded because he had brought so much out of so little. One string and Paganini—one surrendered soul and God! We may feel we can offer little through which the Holy Spirit can work, but God does great things through humble material surrendered to His touch.”