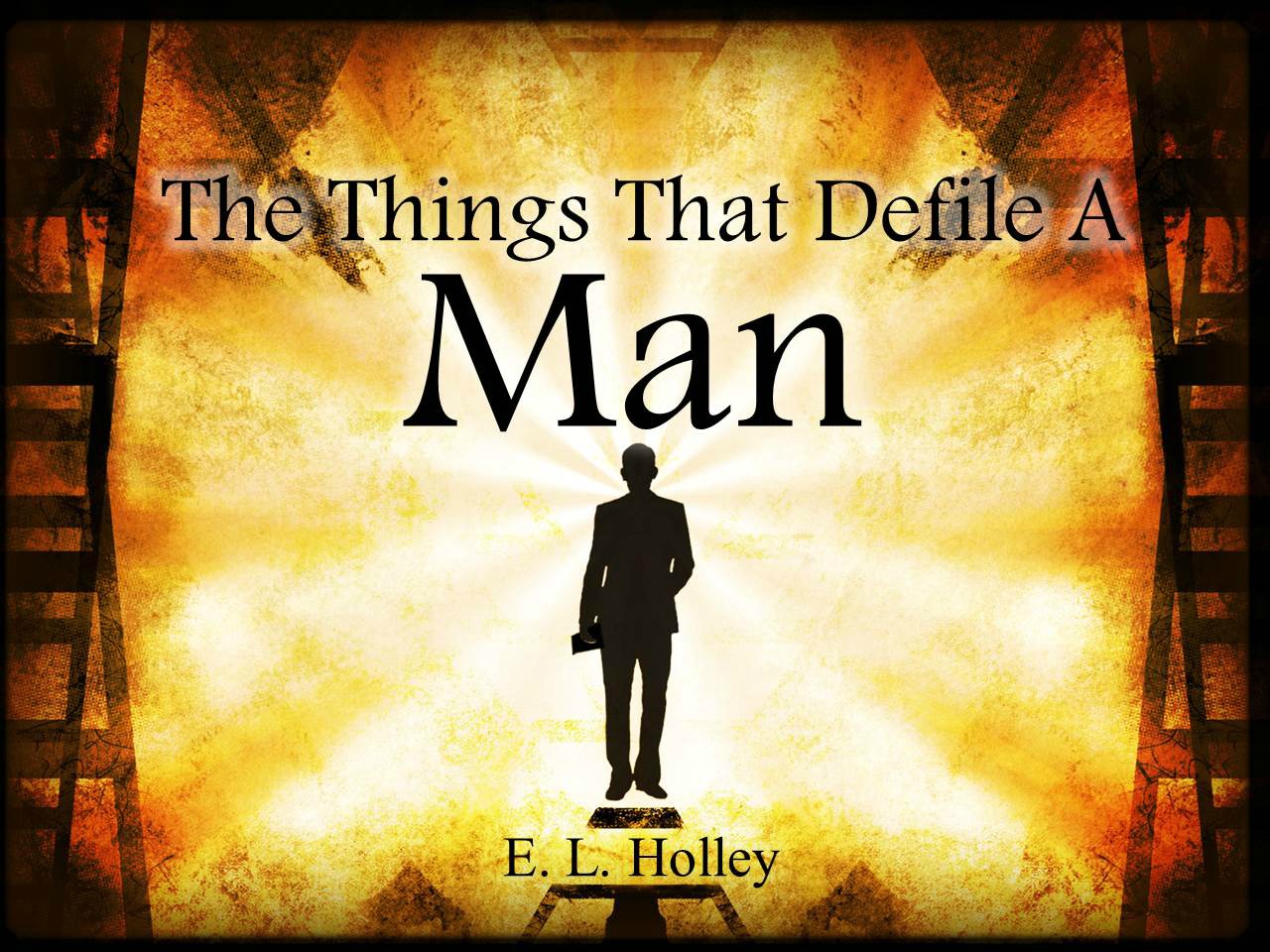 Jesus said, “For from within, out of the heart of men, proceed evil thoughts, adulteries, fornications, murders, thefts, covetousness, wickedness, deceit, lasciviousness, an evil eye, blasphemy, pride, foolishness” (Mark 7:21,22). In reference to the things which defile man, our Lord explained that they came from within, out of the heart of man. How do these things get into the hearts of men? The enemy of our souls plants them there, to be sure! But, how does he do it? One of his most used and most successful methods is men. He uses men to put evil thoughts, wickedness, foolishness, murders, etc, into the hearts of others!

God has not only saved us from these things that defile a man, He has entrusted living souls to our keeping. Our children will be finished products of our molding. To a large extent, the seeds we plant in their hearts will one day come forth, either to defile and destroy or sanctify and save. Their “tastes” will be formed after the diet we feed them or allow them to be fed. Knowing this, let us set up a vigilant guard at the heart’s door, and as far as possible, keep the enemy from sowing his ungodly seed.

Plain to be seen is the crop from the devil’s seed (the harvest is near). The news media are filled with appalling and shocking incidents quite similar to the one that received front page space recently. A young lad, described as a bright, friendly 10-year-old, calmly admitted shooting a neighbor woman with a .22-caliber revolver. One might think that perhaps he was angry with her for some reason or other. But when asked “Why?” by an investigator, he quickly replied, “I saw them do it that way on TV.” In another seemingly peaceful home, a mother asked her 13-year-old daughter to come to dinner. The daughter ignored her mother’s request because she wanted to see the rest of the show. With dinner getting cold, the mother’s patience waxed thin and after several more unheeded pleas, she walked into the living room and turned off the set. When she turned around she was face to face with an angry little girl. From the sewing basket she had taken a pair of scissors; in a moment of wild, uncontrollable rage, she stabbed her mother again and again. The crimson stain on the living room rug is the mute testimony of a blooming crop that had been planted earlier. Another horrible expression of pent-up violence! And strangely enough, there is little or no remorse on the part of the teen-age killer. Here is a hardened, thrill-seeking, violent-thinking product of this generation. Not an ex-convict or gangster, but a mere child!

How did all this come about? While there may be a number of contributing factors, in these and hundreds of similar acts of violence and crime one fact stands out, revealing a pattern. To quote the Juvenile Court Judge of Denver, Colorado, Hon. Philip B. Gilliam, “Kids get a constant diet of violence on television. Even the ones in Juvenile Hall—a detention quarters—get the idea that the way to escape is to hit somebody on the head.” This constant diet of violence on television is the largest contributing factor to our present dilemma. While mother exercises her best judgment in preparing well-rounded nourishing meals, she unwittingly allows junior to lay on his stomach in the living room and stuff his mind full of crime, weird-horror stories, lewdness, and ungodly flesh. From such a diet, the minds of many are being warped beyond earthly means of repair!

Day in and day out, it goes on and on. The impressionable young minds slowly but surely take on the prevailing attitude of the devilish-minded entertainment world. Deeply stamped in these young hearts (old ones, too!) is the lukewarm approach of the world toward all sin. Gambling is presented as exciting. Drinking is the way to have fun. Things are dead without it! A person with godly morals is a square! If someone disagrees with you, simply shoot him! Further, to be pretty, girls must have a catty, vampire look or get themselves a weird hairdo in imitation of some movie idol! Every man smokes “Marlboro” and drinks “mellow Smax beer.” (And what boy doesn’t want to be a man?)

Men of no less stature than J. Edgar Hoover warned this nation several years ago to take steps to curb the televiolence threat. He assured us of a crime-wave beyond our ability to anticipate if it went unchecked. To date, there are no real restraints in the TV industry. In fact, a movie bought from Hollywood that originally ran sixty minutes is cut down to fit a thirty minute program. This cutting process follows an identical routine. In each case, all action shots, fights, killings, suspense, and violence of all sorts are left in the film. The few tranquil and peaceful scenes are taken out! This leaves thirty minutes of breathtaking violence. Why do they do it that way? Because they know child will like the violent, the wild, the suspenseful! This assures the sponsors of a large viewing audience to whom he can sell his product. Therefore, it is reasonable to assume, there will never be an effective curb placed on that type of entertainment.

The adage, “As the twig is bent, the tree will grow,” is very true. Characters that were molded around the fast-growing, turbulent parade of wickedness on television are already finding normal every day living dull and boring. With appetites that were formed around a world of make-believe and extremes, the daily routine of normal living hardly satisfies the craving for the “unusual,” created early in life. This explains many wanton acts of destruction which apparently have no other motive. As the twig was bent, the tree did grow.

What does all this mean to me, a preacher and a lover of holiness? What can I do about it? Convert all of Hollywood’s producers? I hardly think so! I can’t stop the bottling of whiskey, either. But I can raise my voice against it. I can say with Joshua, “As for me and my house, we will serve the Lord.” I can warn parents of an impending disaster. I can urge thinking men to consider forsaking the flesh pots of Egypt for a life of holiness unto the Lord. I can “cry aloud and spare not.” I can obey the Word of God and “love not the world neither the things that are in the world,” at the same time exhorting others to do the same. I can deny myself daily, take up my cross and follow Him I can remember, that as part of His people, I am to be holy, peculiar, and zealous of good works. I can remind men that the devil didn’t show Eve the terrible cost of eating the forbidden fruit, only the fruit that appeared attractive to the eyes. The master of deceit convinced her that this fruit would make her wise.

When I’m plagued with the spirit of compromise and conformity, I can draw a little closer to a holy God, who is my Rock and my Shield. When one who doesn’t see the danger as I see it feels that I’m riding an issue, I can remind myself there’s a holy God who knows my heart. I can keep aware of this fact: Its not a group of “holier than thou’s” Jesus is coming after, but a group of “holies.” A church without spot, blemish or any such thing! Unspotted from the world, with hearts full of love. That’s what God wants and according to the Scripture, He won’t settle for less.

May our Lord Jesus Christ help us to maintain a great and holy heritage. It came at high cost! We must care for and guard the little “plants” in God’s vineyard so the vine won’t become degenerate. Under God Almighty, we can and must do it!

This article “The Things That Defile a Man” by E. L. Holley was excerpted from: The Best of E. L. Holley compiled by J. R. Ensey. Advance Ministries 1997. It may be used for study & research purposes only.

1 thought on “The Things That Defile a Man (Entire Article)”