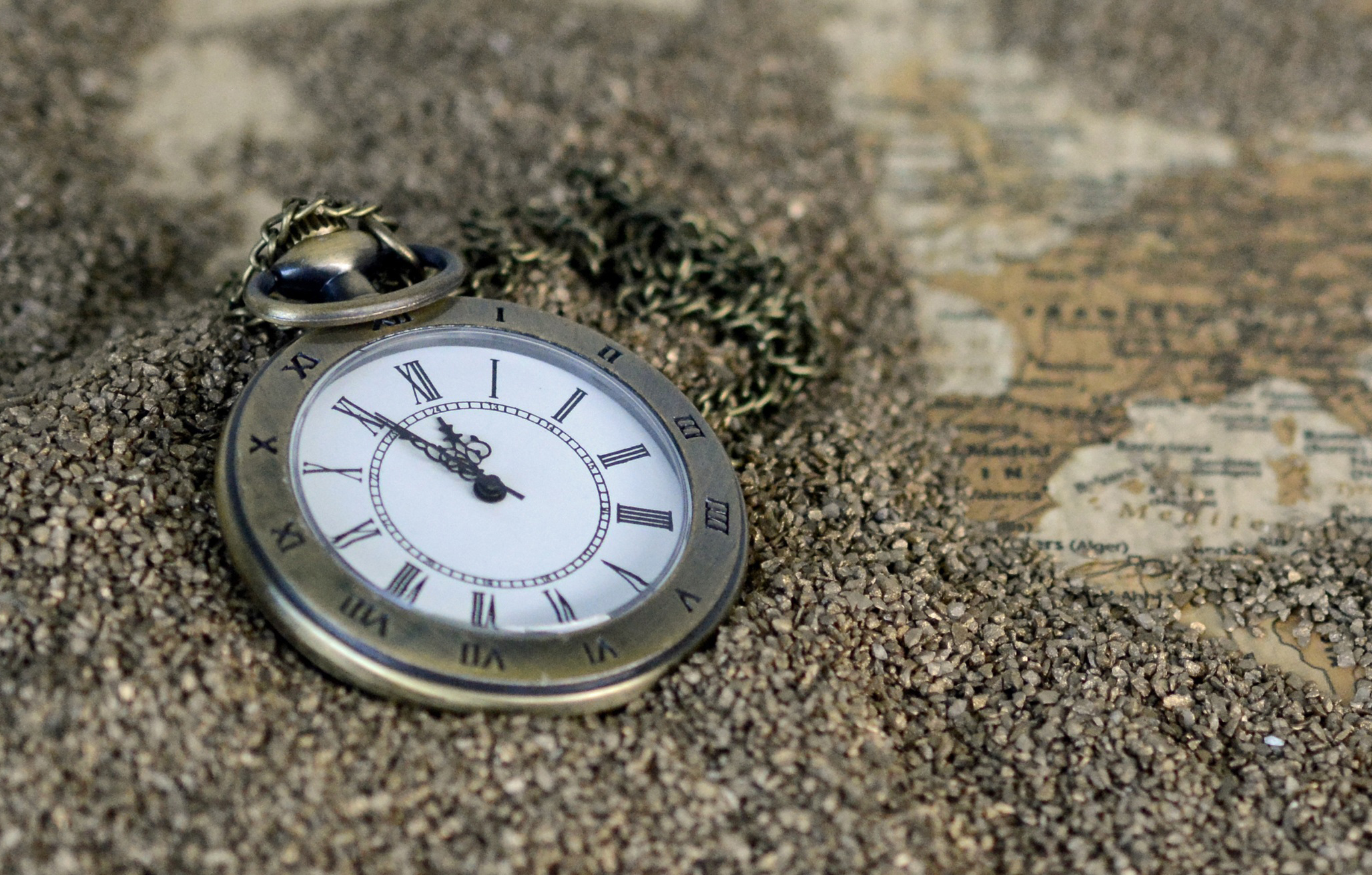 Warning! Get ready-and stay ready-for the trump of God is about to sound! (1 Thessalonians 4:13-18). You will agree that it’s true when you see the obvious connection between … the abomination which maketh desolate … (Daniel 12:1) and our current world.
And arms shall stand on his part, and they shall pollute the sanctuary of strength, and shall take away the daily sacrifice, and they shall place the abomination that maketh desolate. And such as do wickedly against the covenant shall he corrupt by flatteries: but the people that do know their God shall be strong, and do exploits (Daniel 11 :31-32)

What’s next? The anti-Christ (the man of sin, 2 Thessalonians 2:3-4, Revelation 13) will force everyone that takes his “mark,” to bow and submit to his vulgar blasphemies.

Therefore rejoice ye heavens … (but) woe to the inhibiters of the earth.. for the devil is come down unto you, having great wrath, knowing that he hath but a short time. (Revelation 12:12). So, since God’s elect have power over all the powers of the enemy, (Luke 10:19) where are the bold, anointed prophets that, cry aloud, spare not, and lift up their voice like a trumpet (Isaiah 58:1)? Where are the vaunted watchmen on the wall? Why aren’t they sounding the warning? Are they sound asleep? Why are the “men of the cloth” silent? Is their cloth filling their mouths?

The other side is talking. Satan just put his own words into the mouth of the leader of the “free world” as he shamelessly, on his prestigious “bully pulpit,” thumbing his nose at the true God, and to please the 2.8 of our nation who practice sodomy, said he approves of their so-called marriages.

And I’m talking, whether others do or not. Even knowing the threat of the dire consequences of the new jury-rigged “hate speech” laws-I will not ever cease to tell, write, and give the glorious truth of
God-in love.

God has things to say, too.

Since we must all stand before the Judge of all the earth, we should consider what we will say when He reads (and judges us by) these scriptures: And the Lord God said, It is not good that the man should be alone; I will make him an help meet for him; (Genesis 2:18). So God created man in his own image, in the image of God created he him; male and female created he them. And God blessed them, and God said unto them, Be fruitful, and multiply, and replenish the earth, and subdue it: and have dominion over the fish of the sea, and over the fowl of the air, and over every living thing that moveth upon the earth; (Genesis 1 :27 -28). Note: Sodomites cannot possibly fulfill God’s command since they cannot reproduce after their kind.

Read Genesis 6 and learn that only 4 men and their wives and the male and his female of every creature, escaped death. Genesis 13:13 reveals God’s hatred of perverse sodomy; But the men of Sodom were wicked and sinners before the Lord exceedingly. Then go read Genesis chapters 13 and 19, and you will discover, amazingly, that the vale of Siddim which is the salt sea was once a well-watered plain. But an earth-shaking blast of fire and brimstone left it the lowest spot on earth (the Dead Sea, 1300 feet below sea level).
The men of Sodom were so blinded by their deviant, demonic lusts, that they never realized that their intended rape victims were the very angels of God, sent to destroy them for their abhorrent depravity.

In Leviticus 18, God condemns lewdness, nudeness, and sexual immorality in general. In verse 22 he proscribes sodomy. Thou shalt not lie with mankind, as with womankind: it is abomination; (Leviticus 18:22). What could God have said in Deuteronomy 23: 17 to more emphatically reveal his hatred of sexual immorality? There shall be no whore of the daughters of Israel, nor a sodomite of the sons of Israel” (brought into the house of the Lord).

I have shared some of the scriptures condemning sexual perversions and the word “Sodom” is used throughout the Old and New Testaments as a metaphor for God’s fiery judgment against those who hate God, His word and His people. At this point, God’s Holy Spirit is leading me to mention something personal. I am an 82 year-old kid who loves all the kids – boys and girls – on this doomed earth. I want to do my very best to help them learn about Acts 2: 38-47 and be saved from the soon-coming conflagration of 2 Peter 3: 11-14; Seeing then that all these things shall be dissolved, what manner of persons ought ye to be in all holy conversation and godliness, Looking for and hasting unto the coming of the day of God, wherein the heavens being on fire shall be dissolved, and the elements shall melt with fervent heat? Nevertheless we, according to his promise, look for new heavens and a new earth, wherein dwelleth righteousness. Wherefore, beloved, seeing that ye look for such things, be diligent that ye may be found of him in peace, without spot, and blameless.

The Story of Luis:

Young Luis is a microcosm of a global conundrum. I met him recently when he came to our hotel room in Pueblo, CO to fix a sluggish drain in our bathroom. He was courteous and polite, handsome, and in his mid-20s. I was working on this study and explained to him why I was writing it and gave him my card. Then I asked him if he was married. Without hesitating, he said he wasn’t but he and his girl- friend had been living together for five or six years. Obviously, I asked him why they didn’t get married. He said, “Because it’s too expensive.”

Welcome to Satan’s beguiled, blinded, desensitized-by-Hollywood’s spell. Apostate (not apostolic) religion’s deceptions have alienated Luis and the majority of those who don’t follow the scriptures. Revelation 3:20 refers to blind people who don’t know they’re blind and naked people who are unaware of their nakedness. What is truly amazing is they are rich members of the church of Laodicea. They are neither hot nor cold so God is sick of them.

Paul explains why much of the obscenely disgusting aspects of deviant behavior was and is known by so few, but the death toll of this filth is a well-kept secret. Homosexuals are made-not born. Satan, not God, is responsible for their behavior. Someone either forced them into that sin or, of their own volition, they chose it. The New Testament in many places, when listing sins, puts fornication at the top. It’s obviously the most common and worst sin of all.

Things have sure changed since the 1970’s.

Satan’s war of attrition is presently succeeding. The year was 1973 and the case was called Roe vs. Wade. The Supreme Court of our nation opened the blood-gates of abortion and today over 150 million boys and girls have been butchered. That decision was the work of Satan who hates God’s unique blessed holy matrimony and it opened wide the doors of the sexual revolution. We should never forget that God will judge everyone responsible for that innocent blood. It too cries out like Abel’s blood. (See Hebrews 11 :4.)

[As a wise man from many years ago said; The least pain in our little finger gives us more concern and uneasiness than the destruction of millions of our fel/ow-beings. William Hazlitt, essayist (1778- 1830). Editor]

During that same era, the American Psychiatric Association was pressured by the pro-homosexual lobby to change their professional, clinical categorization on homosexuality where they stated that homosexual behavior was caused by a mental illness.

And at that same time, as pastor of the Church of the Full Gospel in Grand Rapids, Michigan, I raninto a theoretical “brick wall.” The Lord had blessed our daily 3-line ad in the personal column of the Grand Rapids Press. I tried to draw attention to my ad by using the word SEX as an attention-getter, then mentioning the Gospel. But the paper would not tolerate it! (I’m not making this up!)

Are we actually living in the same world I lived in 40 years ago? The answer is obvious. With a population 30 times greater than when Jesus walked on the earth and the explosion in communication capability, the recent endorsements of same-sex marriage should be a wake-up call to both the saints of God and those sinners who have not yet been totally brain-washed by today’s decadent society.

Before I conclude this writing, I must call your attention to the Apostle Paul’s graphic description of what could happen to anyone who turns away from the truth of God and is turned over to Satan’s reprobate mind. Study Romans chapter one, especially verses 21-32. You’ll learn that, although no one is born this way-anyone could die this way!

1 Corinthians 6:9-11 is one of the many scriptures that debunk Satan’s bald-faced lie that tries to prove that there is no healing (deliverance) from homosexuality. God can forgive any sin except sui- cide (because one cannot repent) and blasphemy against the Holy Ghost; (Matthew 12:31). God our Creator, an invisible spirit, was manifest in the flesh for one reason: Have I any pleasure at all that the wicked should die? saith the Lord God: and not that he should return from his ways, and live? (Ezekiel 18:23)

And without controversy great is the mystery of godliness: God was manifest in the flesh, justified in the Spirit, seen of angels, preached unto the Gentiles, believed on in the world, received up into glory_ (1 Timothy 3:16).

He that committeth sin is of the devil; for the devil sinneth from the beginning. For this purpose the Son of God was manifested, that he might destroy the works of the devil. (1 John 3:8).

Maurice R Gordon and his lovely wife Doris E Gordon have been married for more than 50 years. Together, they have 8 children, sons-in-law, two lovely daughters-in-law, 20 grandchildren and 16 great-grandchildren. Their six daughters make up The Gordon Sisters who travel all over the world ministering in music and the Word.
The Gordons pastored for 30 years after planting Lovingway United Pentecostal Church in the heart of Denver. They have recently started a new church in Aurora, CO called The Pentecostals of Aurora. Pastor Gordon ministers at the Denver County Jail every Monday night and still reaches out to everyone he meets to tell them about the Lord. Sister Gordon stays active in whatever is planned at church and also enjoys traveling with her daughters when they minister at Ladies Conferences.