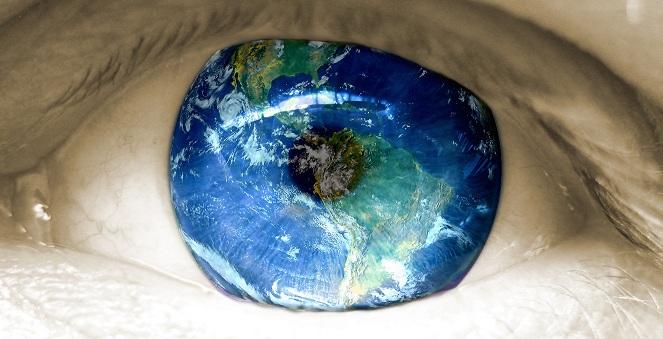 Recently, during a Kid’s Club meeting I was trying to teach he children and youth about temptation. Laying a one-dollar bill on the table I asked if anyone would take the money if they knew no one would find out. I was amazed at the number of hands that went up. On another occasion, I was working with the youth group. I asked whether it was ever right to lie. Some of the young people stated “yes, as long as it is a white lie.” After reading Revelations 21:8: And all liars, shall have their part in the lake…” I found they still did not realize the impact of what they said and did on their ability to be saved. Later, while talking with a group of Apostolic college students about moral development and whether it would be right to steal to save a companion’s life, I found some of them made the decision based on what the chance was they might be caught.

I believe that a Biblical Worldview might be summed up as: Believing your primary reason for existence is to love and serve God        To be like Him, to follow in His steps, to act and think as He would in all situations. A worldview is something much deeper than your personality. It defines your beliefs about reality and your outlook on life. Dr. Mel Tackett, president of the Focus on the Family Institute stated there are “two different kinds—or two ‘levels’—of worldview.” One was called “Formal Worldviews.” He stated this is a major system of ideas that orders human hearts and minds. He likened it to a bookshelf with many books each of which builds a case that the things it claims accurately reflect reality. “Marxism, for example, basically claims that the secret of life lies in economics and, as a result, reality consists in the clash between those who control the means of production and those who don’t.”

A “Personal Worldview” is another level. For most of us, this appears to be a plethora of ideas that we have adopted from the bookshelf. Dr. Tackett describes them as “unconnected truth claims that simply float around our culture. They may be distant cousins or distortions of a formal worldview or unexamined claims that don’t at all reflect reality.” With this kind of worldview, we have unrelated belief systems that we use to interpret reality. Instead of using the Bible to help us decide what we would do in various situations, we allow these “unconnected truths” to help us make decisions. The decisions we make are then subject to the situation and as a result, we end up with “no absolute moral truth” that is based solely on the Bible.

I challenged the church I pastor to start asking themselves the questions: What would Jesus do? It is interesting the response you get from this type of challenge. Listening to conversations and statements made by the members during socialization allows one to see when and how people are putting this into practice. It does not surprise me the Barna Group found so few Christians with a biblical worldview. I realized quickly the worldview is so ingrained in our mind that it automatically takes over and we forget to ask ourselves the appropriate question.

Scott Peck (author of the book Further Along the Road Less Traveled), read the Gospels for the first time at the age of 40. In his book he states: “Human beings have a remarkable capacity to take things that are related to each other and stick them in separate airtight compartments so they don’t rub up against each other and cause them much pain. We’re all familiar with the man who goes to church on Sunday morning, believing that he loves God and God’s creation and his fellow human beings, but who, on Monday morning, has no trouble with his company’s policy of dumping toxic wastes in the local stream. He can do this because he has religion in one compartment and his business in another…It is a very comfortable way to operate, but integrity it is not. The word integrity comes from the same root as integrate. It means to achieve wholeness, which is the opposite of compartmentalize. Compartmentalization is easy. Integrity is painful. But without it there can be no wholeness.”

Peck’s statement is profound and cuts right to the heart of the matter. Without a guiding principle and proper road map to life, we will allow all of these “unconnected truth claims” which float around our culture, to give us guidance on how we should respond. However, the only truth is what the Bible says. They were first called “Christians” at Antioch because they were “like Christ.”

We need to ask ourselves today whether we are “Christ-like” or whether we compartmentalize our religion and other belief systems in separate containers. In my own life, I have had to do a good deal of praying and rethinking beliefs to make sure they always line up with the Bible.