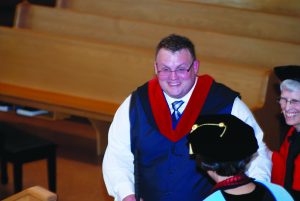 Giving Sight To The Blind
Transcribed by: Gregg Stone

Born into a traditional broken household, Bro. Matthew Yeater has defied the odds and is a living testimony of God’s power, grace and mercy. “I got drunk for the first time at age six,” explained Bro. Yeater. “I started smoking cigarettes when I was nine, marijuana when I was 11, and I graduated to meth and cocaine when I was 15. My teenage years were full of institutions and foster homes.”
Losing his vision when he was 20 while manufacturing methamphetamines, Bro. Yeater almost died and spent several years in prison as a blind man. “The last time I was in jail I was charged with a crime I did not commit,” he said. “I was looking at 40 years in prison. This is where I met God. I was filled with the Holy Ghost and instantly set free from every addiction I ever had.”
Bro. Yeater began to preach in the Elkhart County Jail and soon felt a call into the ministry. Following the leading of the Lord, he attended Indiana Bible College where he graduated in 2013 with a 3.89 GPA, two very distinct leadership awards and a Bachelor’s degree.
“I continued my education, preparing for a PhD at Anabaptist Mennonite Biblical Seminary, where I graduated with a Master of Divinity and a Minor in Theology,” said Bro. Yeater. “As a student in this program the requirement was for me to have a minimum of three semesters in Biblical Greek and the same in Biblical Hebrew. Imagine this for a sighted student and then imagine this for a blind student without any type of resource available to accomplish this.”

Bro. Yeater, along with Sarah LaRose, Ray McAllester, computer genius Brent Graybar, language master Dr. Paul Keim, Dr. Loren Johns, and Ryan Harker developed a braille code, and partnered with David Holladay and Karen Navey at a braille conversion software company called Duxbury to create a profile for Biblical language scholars. “What that means is that I am able to take a Unicode formatted language grammar, and convert it into a digital braille document and read it almost instantly,” said Bro. Yeater. “Because of this project, at this point I can read ancient Hebrew, Greek, Aramaic and Syriac as a totally blind man and reproduce materials relating to critical Biblical textual criticism. Until now, that has never been achievable for a blind Bible scholar.”

Excited about the future, Bro. Yeater is working with two Jewish scholars at Bar Ilan University in hopes of being accepted to continue his studies in Israel and eventually obtain his PhD. He has been awarded first place in the Dr. Jacob Bolotin Award. These prestigious awards, granted each year as funds permit, recognize individuals, corporations, organizations or other entities for outstanding work of excellence on behalf of the blind in the United States. Others who have received this award are Ray Kurzweil and even Apple. “There have been many blind Bible students who have shuttered at the concept that their dream would be shattered because of the lack of access to the language aspect of biblical studies; however, all of that has now been changed,” said Bro. Yeater. “Any blind person will now have that access and will be able to pursue their destiny due to the programs we helped to create.”