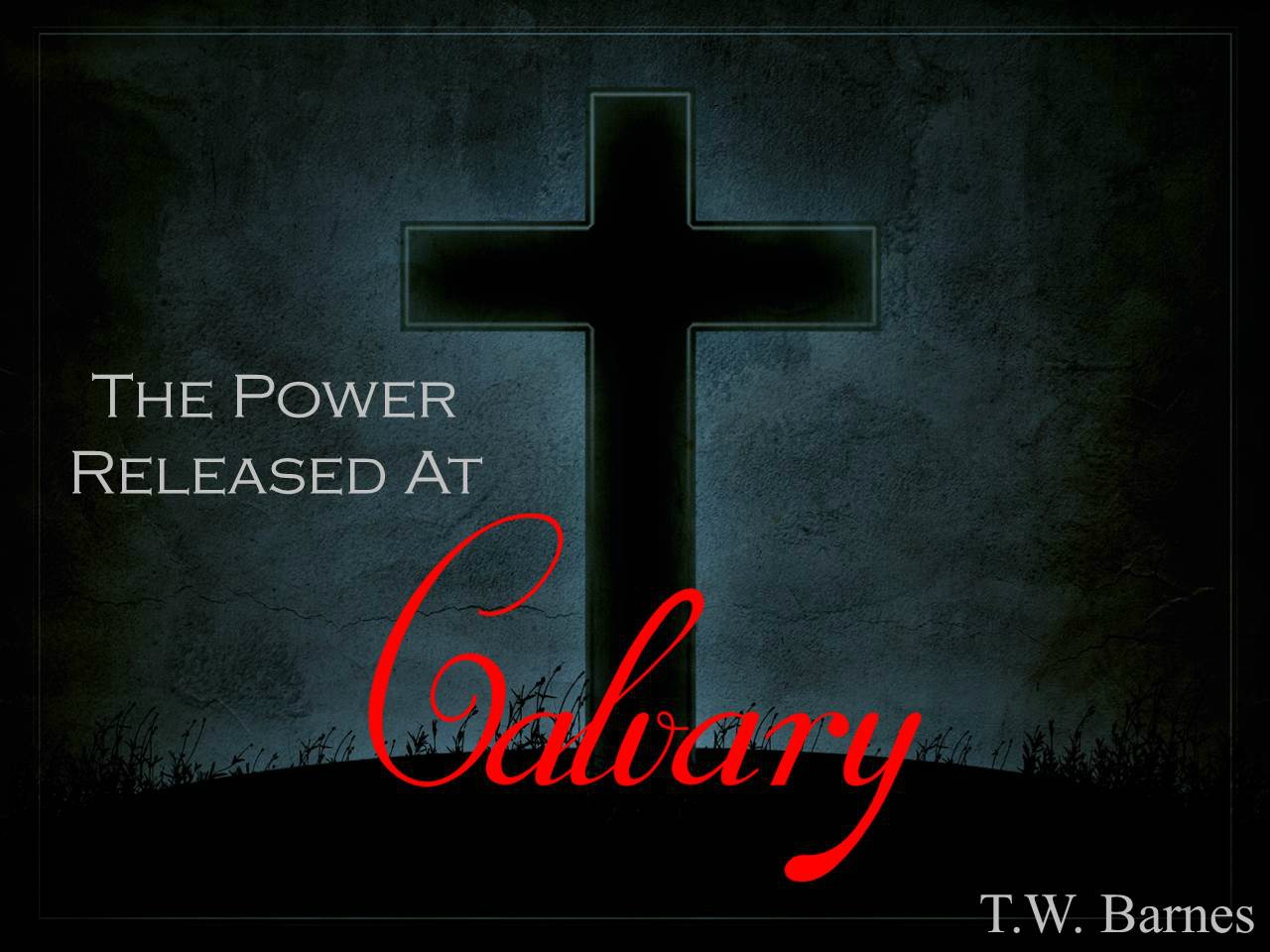 John 19:30: “When Jesus therefore had received the vinegar, he said, It is finished: and he bowed his head, and gave up the ghost.”

The huge veil in the temple split from top to bottom with this power released at Calvary. The earth quaked and the rocks rent. Graves were opened and many bodies of the saints who slept arose and went into the city and appeared unto many.

Oh, the power of Calvary! A thief that had probably never been to church in his life suddenly was saved. Roman soldiers began to tremble and said, “Surely this is the Son of God.” It released the great Pentecostal power and it is sweeping the earth now. I hope someone who is reading this will receive the Holy Ghost and/or be restored to the Lord Jesus Christ.

The power released from Calvary is so powerful it can save every human being on the face of the earth right now if they would yield to it. That power has ne4ver left the earth. It is a permanent in this earth as the air we breath. Enough power flows from Calvary right now to heal every sick person on earth. Jesus went to Calvary fro two things: healing for the sick and salvation for the lost.

The Lord Jesus died on the cross. The Roman soldiers had whipped Him and many of those stripes on His back went to the bone. He bore scars in His hands and His feet. A soldier plunged a spear into His heart. Have you ever stopped to think how long it would have taken Him to get well in a hospital? I want you to understand the resurrecting power of Calvary. When Jesus arose on the third day, He was healed. He had no sores, only scars, and He chose to carry those scars with Him. He came out victorious over death, hell, and the grave. Do not let anyone ever tell you that the power of Calvary cannot take care of sickness Do not let anyone tell you it cannot heal you now. Calvary brought in the better covenant.

We live under the better covenant with better promises. By His stripes we were healed.

Isaiah 65:24: “And it shall come to pass, that before they call, I will answer; and while they are yet speaking, I will hear.”

I have seen this happen so many times. While the Word is going forth, miracles happen in the congregation. I was down in Old Mexico a good many years ago at a huge gathering. Most of the people with me had gotten sick and all my help was gone. They turned the service to me. A little crippled girl, seven or eight years old, was all drawn over with her head on her knees. She had never had her head off her knees. She was born that way. As I was preaching, I suddenly noticed a commotion and the mother came running to the platform with the little girl and stood her up. That was the first time in her life to stand straight.

While I was speaking, the Lord worked a miracle. The crowd rushed toward me then. I said to them, “Wait a minute, we are not having a healing service until you seek the Lord for the Holy Ghost.” Except for two of three Pentecostals the rest of the crowd were sinners. I told them, “All who want the Holy Ghost, come to the altar.” They rushed forward. I asked the interpreter, “How many do you think are in the altar?” He said at least 300. I told him, “Well, it is up to you and me and the good Lord.” The Spirit moved the Holy Ghost fell and many were healed.

The greatest power that has ever hit this earth is being released from Calvary not. It is about to change the world. Nothing can stop this power. You and I have it inside. It covers the world. Angels are all around to help. The Great Physician is ready to touch you and heal you now.

How do you raise the level of faith? Hear the Word as it is preached, believe the Word, and receive the power released from Calvary. Live faith and talk faith.

A few moments ago I went into a place where everyone had sick stomachs. I must have caught what they had and I was complaining about it. The Lord spoke to me: “When my people get sick, they repent of this and that and then go to the doctor. You need to repent for getting sick.” In other words he was saying if I had a little more healing virtue when I went in there I would not have got sick. You know we sometimes forget to thank the Lord for not getting sick. If we would thank Him all the time for what. He is doing for us, a lot of our sicknesses would never come.

Look at Calvary and see the love He had for us. Thank You, Lord, for Calvary. Thank You, Lord, that you did not leave anything out we need. The last time He appeared to me, He said, “Tom, I went all the way for you.” He gave His all for us; we need to give more of ourselves to Him.

Believe now in the great power released at Calvary and receive your healing.

Prayer: “I bind the demon of cancer; I curse every root. Every growth, every tumor, every goiter will disappear in Jesus Name. Go in Jesus Name. Amen.”

1 thought on “The Power Released At Calvary (Entire Article)”